Wednesday was the first degree session this semester, and was a continuation of our work on 3D pieces. We started by making fairly straightforward little vessels, following Janet Edmond’s technique from this book.

It was, as usu 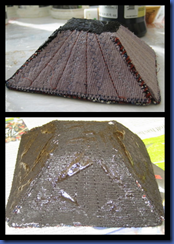 al, one of those sessions when I thought ‘If I’d known what we were going to do I’d have brought something different’ – and my piece was pretty boring.

So this morning I got out the black gesso and a rubber stamp.

Part-way–through and after images to the left. It is due to get some metallic paint and possibly some verdigris at a later date. Anything to make it a bit more interesting.

Wednesday afternoon was spent constructing a fabric to make a vessel to stiffen with PVA, which is not a technique I’d come across before, although we did PVA fabric together to make a background on C&G.

The piece I made for that was so uninspired I’m not even going to show it to you. 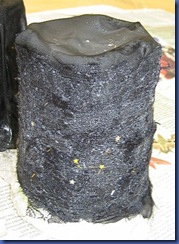 Experimental piece one - a yoghurt pot, covered in cling film, draped with various black sheers and painted with PVA – with a dollop from one of these which are my new favourite things. 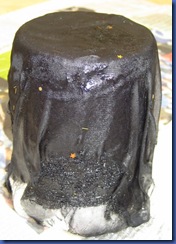 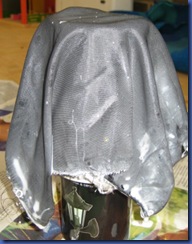 And 3 is – yes, you guessed it, yoghurt pot and cling film, sheers, confetti glue – and Paverpol, this time. Another of those things I’ve had for years and never used.

The sheers are black, by the way – I think I may have been a little bit too generous with the Paverpol.

Those of you with a scientific background may be thinking that this is not a well-designed experiment – too may uncontrolled variables, like the type of sheers I used and the way I draped them – but doing all three the same would have been boring - even assuming I could remember how I did the first one.