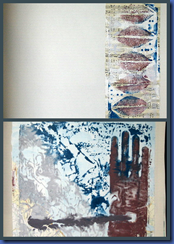 are these two collagraphs - not perfect, but the instruction was not to make 100 perfect drawings. Or if it was, I missed that bit – too late now!.

Number 94 is a cheat er - ‘found art’. Spore prints on the bottom of a box of large mushrooms. I wish I'd added some stitch before I put it in the sketchbook, although I don’t know whether the box would have stood up to it.

Number 95 is a tissue and paint sun print, overprinted with found objects. I was sorting through a pile of the stuff I’ve done over the summer and decided to include some of them – in truth, I’m getting a bit bored with all this ‘drawing’. 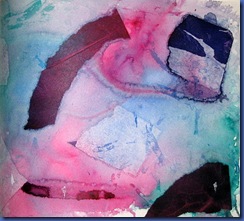 Number 96 is a tissue and paint sun print without additional printing. A bit of doodling on it might be called for if I can work up some enthusiasm. 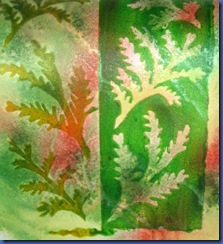 Number 97  is a screen print, which I think you've seen before, with washes of Koh-i-Noor and ‘The Works’ cheap opalescent paint, . 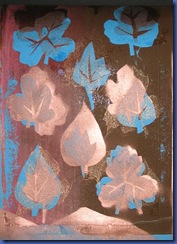 Number 98 is another screen print,  on turquoise card, over-stencilled with spray paint.

Just for a change, number 99 is a new piece 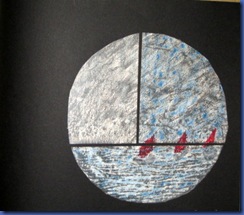 . Before I printed with the collagraph plates, I tried using them as rubbing plates with a black oil pastel – and this one looked like a seascape with dinghies to me.

I cut it up because I was inspired by Linda McLaughlin’s beautiful quilt here - I hope she will forgive me pinching her idea. Then I gave it a wash of different shades of watercolour.

And number 100? It doesn’t exist yet – or only in embryonic form. I decided I had to include an image inspired by my essential summer viewing – and the image which epitomises the TDF for me is one like this. So while I was pinching ideas, I pinched an image from a well known cycling magazine, and will work some chemical magic on it to transfer to one of the sketchbooks. 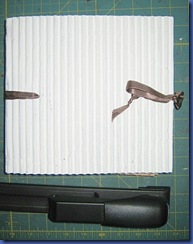 And then I made a book. Very quickly.

Here it is with the means of production.

I’ve never stapled a book together before – see what sins buying a long arm stapler can lead you into?

Stapling a book together isn’t quite as easy as you might think – it’s a bit difficult to get the staples in precisely the right place. But not that difficult. 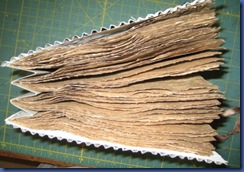 And it is much, much quicker than sewing.

The whole book is made from recycled packaging – apart from the ribbon – oh, and the staples. [Not even I will attempt to recycle staples.] I was going to use a bit of recycled Christmas ribbon – until I ironed it.

The pages are made from the brown paper Amazon and others use as filling in their parcels, and which I can’t bear to throw away. The cover is corrugated card, which I had painted white at some time, for no very good reason, [left-over emulsion paint of course] and the concertina spine is a from a box base.

Little will happen next week, as we are on four days of Babybel duty. Apart, that is, from lots of dog walking, play park visiting, and the occasional outing to places with animals or birds of some variety, preferably ones who are amenable to being fed. [Any recommendations for suitable places in West Berkshire or Hampshire will be gratefully received.]

Followed by sitting down to recover, preferably with a glass of something cool and white, after we have returned her to her doting parents …

This is the only place I know of suitable for such a small person
http://www.finkleydownfarm.co.uk/
The Hawk Conservancy at Andover is terrific but maybe too grown up. Good playground, though; time the visit around the flying display times. They get the vultures to fly low over the spectators and it makes the kids scream (you have been warned).
Can't wait to see drawing 100. Hope it is truly spectacular. A millennium theme perhaps!

I like #99 and I'm glad my quilt was your inspiration. I do like the mushroom spores also.

Hi Celia, you could glue some thread/cord/or string across the spore prints in some way so as to be a "one step on from stitch" drawing.

well done you for getting so far! I am sure if you take in some of your "I don't think they will allow this" drawings, that they will actually allow them.

and lastly, Bucklebury Farm Park just south of the M4 between junction 12 and 13. you can get to it from either junction. It was good when we used to go with my now 21y.o. and they have added all sorts since then.
http://www.buckleburyfarmpark.co.uk/

Have fun,
Sandy in Bracknell