That was what we were supposed to be doing in college yesterday – but in my case it turned into architectural cutting and pasting [and today it’s been architectural GIMPing].

In the morning we were asked to ‘draw a diagram’ of our redesign of the classroom. Now when I read the word ‘diagram’ I think ‘maths’. As we had been drawing nets* for boxes the previous week, I immediately thought of drawing a plan of the room – floor, walls and ceiling. And as we had been given art magazines to cut up – why not decorate the room with art? 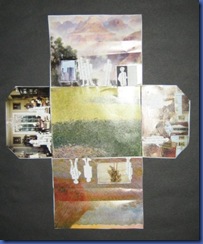 Which led to this. Not quite, judging by the teacher’s reaction, what she had anticipated.

I did draw the out-of-proportion little figures, though.

[The room is in an old Victorian school and has a vaulted ceiling – hence the odd shape.] 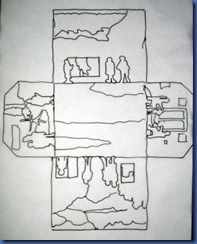 Then I did  more drawing some tracing. I like this – and so did a lot of other people. 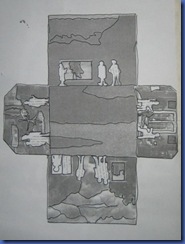 And then I photocopied the tracing over the net – which I also like.

In the afternoon we were supposed do work inspired by the outside of the building – but by then it was pouring with rain, so I seized gratefully on some photos which Mel had taken earlier, photocopied them, and did some more cutting and sticking.

Layered photocopies bottom left, the remnants left when the images were cut out bottom right, and a tracing of the first image using a light box at the top. I like all of these cheat’s drawings.

The final task, which i didn't get round to in class, was to find our homes on Google Maps, and produce a third piece of work from that.

The people who did get round to it all seemed to be drawing maps – so of course I had to do something different. 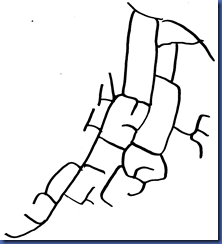 I did start with a [non-Google] map of our immediate neighbourhood, which I traced. [Bit of a pattern emerging here?]

I love the curly bits.

Then I GIMPed it.

I turned it upside down, and copied and flipped it – and look, a butterfly!

So I added a few more lines, and, after Wensleydale said it looked like stained glass, layered it over a gradient and coloured it in.

Not, I suspect, what Mel meant by architectural drawing. 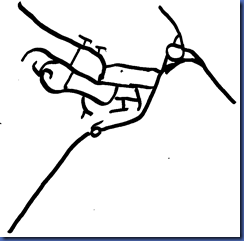 ng by a mile. Cutback appliqué, I think.

So I had a really enjoyable time and hardly did any ‘real’ drawing at all.

And I have a tracing of another map waiting to be played with. I think this one is a bird.

* a two-dimensional pattern of a three-dimensional figure that can be folded to form the figure. http://www.icoachmath.com/Net.html

yes please. I like it. and if they say they don't like it, be bold and say why not? and that you think you could take this places and to look at eszter bornemisza's work http://www.bornemisza.com/pub/_content.html
only you think you will go with maps turning into creatures. which may lead you to making creatures with maps or using maps as part of a mixed media base like Sarah Wyman http://www.etsy.com/shop/sarahwyman
and so on and so forth. LOL

and be confident in the face of their comments. if you believe it, they will find they have to!

Sandy in Bracknell cheering you on.

So creative , bet your creative streak just gets wider and wider . great fun and I loved your interpretation. judie