or as normal as things are around here.

The computer doctor arrived on his white horse [or was it a grey Volvo?] bearing some bags of chips and what I can only describe as a laptop mat with a pair of fans in it. Since when, my machine seems to be working OK – in fact it is positively cool. Thank you, computer doctor!

So I have given Wensleydale’s machine back to him and returned to my own – though as a result of playing around with the settings on his I have ditched Firefox and installed Chrome. 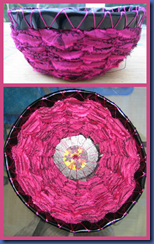 In the middle of all this I managed to finish the bowl. My idea to use some black PVC fabric to cover the lip didn’t work out as well as I had hoped – as you can see, it wrinkled – but I’m pleased with it. I happened to have a painted metal washer in my stash [as you do], so I put that in the base – the bowl was stable without a weight at the bottom, but I thought a bit extra wouldn’t go amiss. 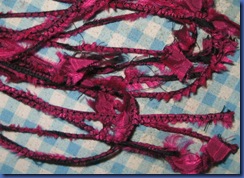 Then, as there was some magenta shirt left over, I made some cord, by knotting strips together and free machining it.

I used very fine wire in the bobbin as suggested by Ruth Lee – not sure how much difference it makes but we’ll see when I make something with it – although I haven’t decided what yet. 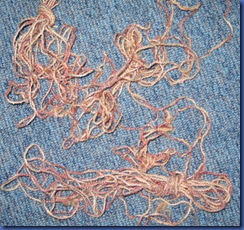 Then I made some more cord – which is more interesting in the flesh than it looks in the photo. It is made from three strands of Paterna tapestry yarn and one of a brown chenille I got years ago from Texere and which seems to go on for ever.

After I made it, in the spirit of Cheese experimentation, I washed it.

It shrank [as expected] by about 7% and now looks slightly softer than it did before. This will probably be used for some Ruth Lee insp 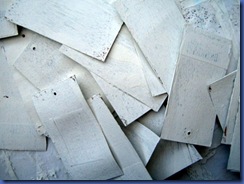 That was yesterday. Today I have painted some tags  which made me realise how much we’ve bought from Cotton Traders over the years!

No idea what I’m going to do with them now, but probably something book-related. 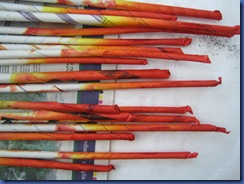 And I made some giant spillikins and soaked the ends in Brusho  - Lois Walpole inspired, though you mustn’t blame her for the Brusho. I had some left over and thought if I dipped the ends in it the paper might soak it up – which as you can see, it did, in quite an interesting way. 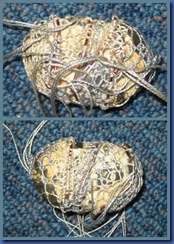 And finally I produced the only thing I’ve ever made which caused Wensleydale to say ‘What on earth is that?’

Although knotless netting seems awfully like needlepoint lace to me. [I am open to correction if you know better.]

Maybe things aren't so normal around here, after all.

Ditched Firefox for Chrome - you are more Techno advanced than me! Your spilikins reminded me of some recent DIY (don't ask).