Tuesday is the new Thursday

or vice versa. Whichever it is, we have swapped our Babybel day from one to t’other so we spent Tuesday dog walking, duck feeding, soft play areaing, Thomas watching  and collapsing on the sofa totally knackered.

Wednesday was the induction day for the new students at college so I have nothing creative to report from there.

Today has been spent coming and  going – most importantly to ‘Heft’, the latest exhibition at Winchester Discovery Centre.

Unfortunately I neglected to make notes about works and artists, though there is a list of the latter on the link. To my shame, the only name [and work] I recognised was that of Gavin Turk, [his ‘polystyrene’ cup] but that says more about me than the quality of the pieces on display.

A quick Google tells me that the mesmerising video of an underwater sculpture park [I kid you not] showed the work of James DeCaires Taylor – beautiful, fascinating, thought provoking.

I think the piece made from cows’ stomachs [I think that’s what the French meant] was by Elpida Hadzi-Vasileva. Don’t let that description put you off – it was a fascinating piece and very inspiring to a textile arts thinking about 3D work. [It had stitches - that makes it a textile – although not one I am planning on using any time soon.]

Other pieces I remember are the sellotape boxes, the chipboard with wood grain drawn on it [very stitch-like], the pallet made from found timber and like no pallet you’ve ever seen before, the bricks which were by the same artist, the raindrops on lino and the 3D pieces which weren’t – but Googling hasn’t been very informative so I can’t tell you who made which. We will be going back, however, so next time I will make some notes!

I came away thinking about the need to look at ordinary things with new eyes – which has to be good. Strongly recommended.

In between all that, I have been fiddling around with some little 3D bits. I thought my patinated copper bowl that isn’t needed some contents and, inspired by some of the items from the Staffordshire Hoard,  decided it needed a collection of unidentifiable odd little bits and bobs… After all, the shape of the bowl was inspired by something from the Hoard, although as usual it has morphed a bit from the original.

Long time readers may know that I like making silly little bits of nothing from scraps. 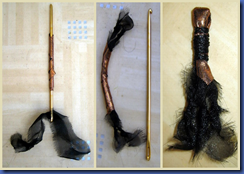 So here is Thing One. [I have no idea why three consecutive photos are different colours – I’m an embroiderer, not a photographer.]

A scrap of coppery slinky fabric rolled up, with a strip of sheer pulled through it and then folded in half and wrapped.

That cunning tool is a latch hook. I bought two a while ago but didn’t take to latch-hooking, since when they’ve been sitting reproachfully in my sewing basket, asking to be used.

When I wanted to roll the fabric tube I was too lazy to get up and look for a kebab stick, my usual choice, and the only thing within easy reach was a locker hook. Then it dawned on me that the useful hole in the end [think crochet hook with an eye] would make it easier to pull things through the rolled tube.

Thing One looks a bit shiny so I think it may get some paint on it to make it more worn, characterful and looking like it’s seen life. 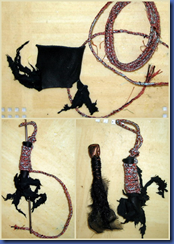 Thing Two started with a bit of tatty leather and some of the machine cord – definitely worn, characterful etc.

I rolled the leather round an end of cord, made a loop, wrapped the cord round the leather and used the smaller locker hook to pull the end of the cord up under the wrapping to secure it. 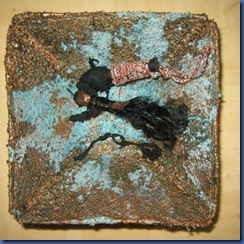 And here they are tastefully arranged in their bowl. [Can you have a square bowl? If not I don’t know what to call it. A dish? It’s definitely not a vessel.]

Whatever it is, I'm pleased with my unidentifiable artefacts – and pleased to have found a use for the locker hooks!

hi Celia,
you need one more for asthetic reasons...rule of odds and all that. ;P

actually, I love your idea of making found tools! Have fun aging them.
Sandy