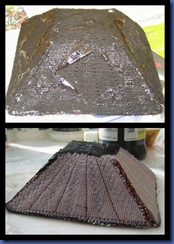 I forgot to take photos as I went along, but as it was mainly black it probably wouldn’t have been very visible anyway.

Not bad for a bit of old curtain, which I think has now taken on the status of ‘resolved sample’.

Of course. I'd mixed up too much of the medium+bronze powder, so I splodged some on some bits of coppery plasticky stuff which I think came out of a Glitterati pack. [Magpie? Me?]  I had previously attacked it with webbing spray in an attempt to cut back the shine [as proper embroiderers say] but additional the bronzing powder and patina treatment made it better.

While I was at it I decided to dab the mixture onto some ‘liberated Bargello’* patchwork which I made after the last but one college class. 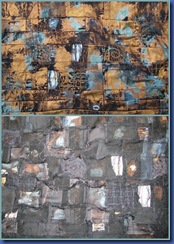 I was only going to add a little bit, but I liked the effect so much that I had to mix up some more bronzing powder and medium.

Even the back looks good – if you like worn, characterful things which look like they’ve seen life…

My inspiration was this, especially the square plates, so a bit of wear and patina is appropriate, I feel.

* Tear up some strips of fabric. Sew them together including a strip of water soluble fabric. Slice across the strips and sew up again at random. Work free machining across the water soluble bits and wash out. This one had some free machined spirals, stars and grids added, before I covered them up with all that gunge. 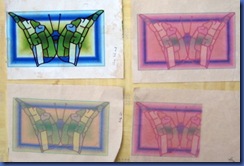 Then this evening I revisited the failed fabric printing pieces. This time, rather than freezer paper, I stuck them to paper using wide double sided sticky tape – and as you can see, it worked – once I’d discovered that I needed to use the tape down the sides as well as at the ends, or the fabric lifted and moved and the printer jammed. Which is why the bottom pink one is only half a butterfly. [You can reuse the paper though, at least twice]

The bright blue green one is on the white Inkaid, which works well but has the biggest effect on the handle of the fabric – past experience suggests it will be too stiff to hand stitch.

The clear Inkaid [top pink] also worked well, and it feels slightly softer than the one using the white version.

The bottom pink one is Printability, which is softer still but slightly less crisp looking than the Inkaid version – although that may be caused by the fabric distorting as it printed.

Bottom left is the Bubble Jet Set. This is NOT the same image as the one above, so it’s difficult to make direct comparisons, but it does look faded relative to the others. However:

Mmm – I thought I hadn’t done very much today but reading what I’ve written, I'm exhausted.

Now I'm off to eat my Wensleydale-prepared burger and chips and to watch Mr Wood, followed by Wallander - who is also worn and characterful and looks like he’s seen life – but doesn’t have quite the same effect on me as the other gentlemen.

LOL Reading this post gave me the first chuckle of the day. Thanks Celia for your digressing :-))

Celia, the butterfly experiment is very interesting. I have been enjoying reading your blog since I haven't been here for some time. You are doing some fun things. :-)