What do you get …

if you cross some souvenirs of KLM 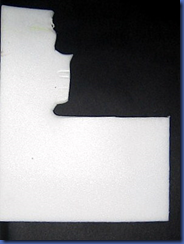 Blueprints to go in the  architectural drawing sketchbook. 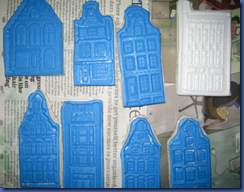 I've had the Softsculpt for ages and never used it, partly because I didn’t think making stamps with it would give very good images.

I was wrong – although they would have been better if I’d applied the paint a little more carefully. 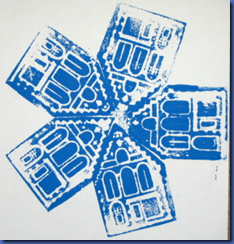 I’d like to pretend that I got the protractor out to measure the roof, before I did this – but I’d be lying – I just got lucky. 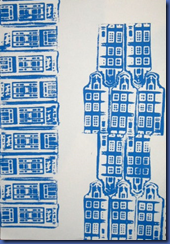 I am not a regular flyer with KLM, but Cheese Major used to be, and he brought the little houses home to his mum. They contain[ed] some sort of Dutch liqueur, but not being a liqueur drinker I’ve never tried it [pity it wasn’t gin]– though someone must have because some of them have been opened.

These days he only flies to Leeds-Bradford, and I don’t think such things are available on those flights …