My laptop has been a little temperamental for a while, periodically crashing for no apparent reason, but it has deteriorated rapidly over the last few days. I noticed that, just before each crash, there was a noise like a fan running hard, and the bottom of the laptop felt very hot  - even balancing it on a cake cooling rack didn’t help.

So the computer doctor is on his way, and I am using Wensleydale’s. But W’s [same model, set up by same computer doctor] runs like treacle, and because W. is probably the least computer minded of any laptop owner in the country, he had nothing on it. No Adobe, no Livewriter, no Picasa – nothing – and downloading each one takes centuries [although once loaded they seem to run OK].

And of course when mine is mended I will have to reset this one the way he likes it [no pretty pink flowers on iGoogle – no iGoogle, come to that.]

Apart from that, we’ve had quite a good week. On Tuesday the duck feeding and play park visiting went well, although the pumpkin face we made in the afternoon was ‘a little bit scary’ and so stayed at Gran and Granddad's, and the pumpkin bread we made from the left overs was a 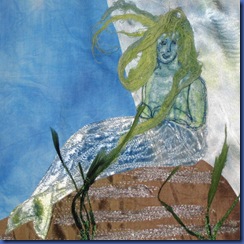 Wednesday was college – this was my contribution to the ‘glamour’ theme of Drawing Studies. Stop laughing!

[Hope you can spot the Botticelli influence.]

Yesterday we made our final visit for the year to ‘Art in the Garden’ where I got rather fixated on some dying red hot pokers.

There was some good art, too. 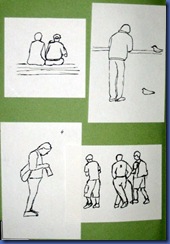 And today I did some real drawing, based on photos I took when we were in Liverpool. I was trying not to be too obvious about it, which is why most of the people had their backs to the camera. 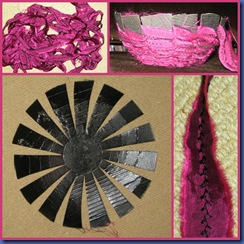 And then, returning to the 3D theme,  I started making a bowl. After we went to Lois Walpole's exhibition at Walford Mill, I managed to track down a copy of her long out of print book ‘Crafty Containers’.

Walpole’s original  bowl is made from corrugated card [got that] and iris leaves – which unaccountably  I don’t have to hand.

So I followed Walpole’s recommendation to experiment with other materials. Like an old shirt. [Mine, not Wensleydale’s – magenta isn’t his colour.]

I ripped the shirt into 2cm wide strips [more or less] and machine embroidered down the middle [more or less]. The machining isn’t essential but I am doing a stitched textiles degree, after all.

I found the weaving quite relaxing, as I could get into a rhythm with it, and it looks as it is going to end up circular [more or less].

Thank you for the inspiration! I used the idea of the cardboard shape and weaving to produce a little bowl, you can see it on my blog here http://faffingabout.blogspot.com/2010/10/woven-bowl.html
Thanks again!