Having a college-free morning, I buckled down and tidied the workroom. Sort of. Put print-outs in the right places, emptied the bins, put some bits of fabric away – so now you can see the floor and a bit of work space.

Then off to college to assemble my plinth wrapped in corrugated card with a tatty cardboard box on top of it. This was a relatively quick process - apart from taking all the cardboard off and remounting it with the corrugations outside 'cos Miss thought it would look better – and it did. Note to self – always make sure your display doesn’t have to be hung on the wall or from the ceiling so you don’t have to wait for a man to come and erect things for you. [Double entendre intended – sorry, I’ve got that sort of mind.] 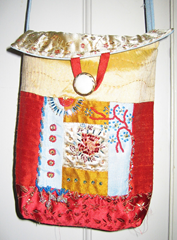 Since I got home I finished this – which I mentioned a while ago and then went very quiet about. It got shelved for a while because it had got to the machine sewing stage and I was more in the mood for sitting in sunshine with a bit of hand sewing. But as part of the deck clearing, I decided to finish it. Not sure about the flap, and I think the button will have to be moved, but it holds the essentials better than the elderly black one I've been using.

For those who remember a tirade I posted ages ago about small bags, I should point out that this my little bag – I also carry a bigger one with all the rest of my junk in it – other specs, drawing kit for Babybel,  shopping bags, rain hat, extra tissues, camera etc. etc. etc.

So now that is out of the way I have no more excuses for not getting started on SAM, PMS, PCs and essay - not even the photo challenge, which ends tomorrow.

The penultimate challenge is ‘black and white’. Now, PFAEC has lots of recipes for turning your colour images B&W, but the effect I fancied for the image I wanted to use wasn’t one of them. I wanted something moody, and ‘Nocturnes’ inspired by Whistler, seemed to fit the bill - so I decided to try the Nocturnes effect and remove the colour afterwards. 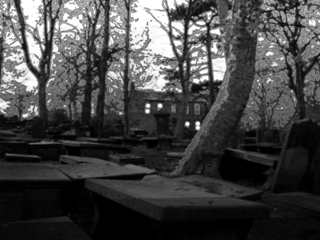 I think I was a bit heavy handed with some of the steps so it’s a bit cartoonish, but I’m quite pleased with it. Can you imagine Heathcliff behind those windows? [For those who don’t know it, it’s Haworth Parsonage, where the Brontes lived.]

Tomorrow is the final self portrait - will Cheshire reveal her true face to the world at last?