Just a couple of steps behind…

so no change there.

While we were on holiday I came across this, and as I’m trying to improve my minimal photography and Photoshop skills, I thought it would be something to add to the roster of things I’ve started but not finished try.

I think the idea was that we started on June 1st – and I really meant to – but we were on holiday and other things took precedence – like the aforementioned eating and drinking too much.

So I started today, but I have taken several photos in an attempt to catch up. I haven’t photoshopped all of them, photographing being quicker than photoshopping, at least the way I do them, but here are the first two.

The first challenge was a self portrait, but shy, retiring soul that I am, I ducked out of the problem of trying to work out how to take a self portrait which actually showed what I look like, and went for a reflection instead. 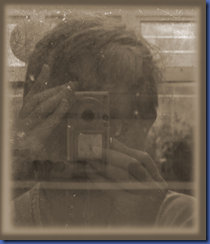 around with ideas from ‘Photoshop Fine Art Effects Cookbook’, which, as it’s written for Photoshop rather than Elements, has been even more of a learning experience. ‘Fine Art’ in this context includes historic photographs as well as paintings and prints.

This is my attempt at a fake wet plate collodion print from the 1850s to the 1890s. It was taken in the conservatory looking into the dining room so there are quite a lot of reflections of things other than me.

The second challenge is ‘What I wore today’. Now this runs into the same problems as a self portrait – how do I photograph what I’m wearing? I could take it off – but it’s not bed t 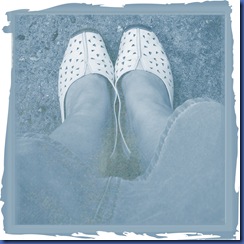 So what is easily visible? Well, the things I keep having to crop out of any photos I take of things on the floor.  Yes, my feet.

My skin isn’t actually blue, you understand, and neither is anything else – this my attempt at a cyanotype, c1840s, with a black line added by Livewriter without my consent.

Earlier on in the day I had collected my sewing machine from the repairers – so thanks for your suggestions, Sandy, which I will try if the Teflon foot doesn't work.

We also went out to Walford Mill to see the exhibition ‘Under and Over’, which is an interesting combination of very wearable clothes and accessories, and not-really-meant-to-be-worn art works inspired by clothes. I particular liked Carole Waller’s wonderful painted clothing, Elisabeth Hamlyn’s knitwear [oh, to have the figure/courage to wear it], and Elizabeth Forrest's combinations of recycled items of clothing and poems in calligraphy.

Funny how satisfying a busy day can be…

Tomorrow is the Research Project hand-in day. I keep finding new bits to add, so my initial plan not to include any print-outs has gone by the wayside – though I have read them all.