A bad start – but definitely improving…

It started when I had to leave the house before the rush hour was over. I'm sure you realise that pensioners are forbidden to leave the house that early – enforced by not allowing us to use our bus passes – but I had a hospital appointment at 9a.m. Today was HA day – the day I got my hearing aids.

Everyone who knows me is probably saying ‘not before time’ – but it makes me feel old. And being assured that my particular type of hearing loss is inherited, not due to ageing, is no consolation…

I can hear much better - in fact everything [and I do mean everything] sounds incredibly loud.

I was assured that I would habituate to this fairly soon – but listening to myself eating lost its charm very quickly.

So this afternoon I found myself something quiet to do.

I mentioned that I’d been inspired by the work of Karin Wach. I love her stuff but I don’t want to copy it exactly, so I began to think about developing it for textiles.

My first idea was to use T-shirt transfer paper – but:

The answers were no – and no. The colours were fine on the rather pale coloured image I was using, but getting everything lined up when you are working without being able to see what you are doing, because you put the images face down on the fabric, was a nightmare. And then peeling one layer of backing paper from between two transfers wasn’t much easier.

Then I thought ‘Stack and Whack’. I have made a couple of stack and whack quilts, but no more. Fun when finished? – yes. Fun to make? – no. As y 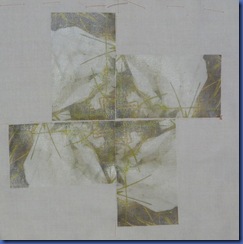 ou will shortly see, I don’t do precision.

Last night I played with a few off-cuts of transferred photos to try the idea out.

Not a very inspiring image, but worth following up. 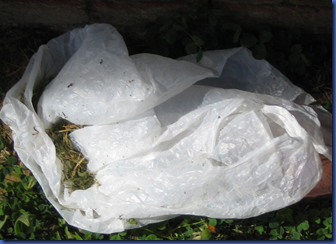 I carefully [who am I kidding?] cut equilateral triangles out of 6 transfer paper copies of this not very exciting image – and then made interesting patterns with the left-overs…

It is not a good idea to put a hot iron down on a section you’ve already taken the backing paper off. Ask me how I know…

However there is an article by Margaret Applin, on using transfer papers, in the April edition of Quilting Arts. She suggests colouring the fabric around the print after you have transferred it. So if I add some more black smears, possibly the original black smear will be less obvious?

I remembered that Maggie Grey has a section on using transfer paper in ‘From Image to Stitch’. I found the book [with some difficulty – I had a tidy up of my bookshelves one day when I was procrastinating] – and decided to try applying the images over textured backgrounds – of which I had several, in the ‘interesting things to put through the printer’ pile. 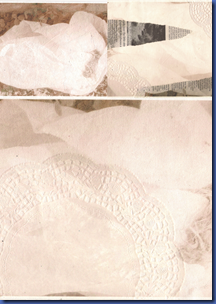 But as they were based on Bubblejetsetted or Inkaided or Printabilitied fabrics – I decided to print on them first – with an enlarged, sepiafied copy of the same image.

Of course I had to scan the results before I did anything else with them. [To think I decided to use them because I thought it would be quicker than Bondawebbing some lace or scrim to cotton…] 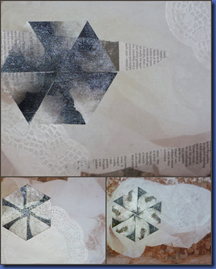 And finally – I made my hexagons.

The transfer paper [an old packet from WH Smith which says very firmly it should only be used on cotton] struggled a bit with the odder elements of the substrate, and tended to peel off – and I’m not sure the background print was such a good idea – but I like the slightly surreal effect. Maybe I don’t even need to do the cutting up and reassembling?

So, overall, it’s been a better day than I thought it was going to be. And it may turn out to be even better, if a certain event happens tonight, as expected. Not saying any more, we’ve had one false start already…

Good luck with tonight, Celia - or whenever he decides to turn up. Best then turn the HAs off. It is amazing how 2 mins before arrival the little beggars are silent and 2 minutes after, they are - and remain - LOUD