This is the worst quilt…

I have ever made. And possibly probably definitely the worst bit of sewing I've ever done, worse even than the skirt I made in school when I was 10, entirely by hand – although I unpicked that even more often, at the teacher’s insistence.

I free machine quilted it, very very very badly. In my own defence, for conceptual reasons [‘ark at ‘er] I’d chosen a fake leather backing, and it did not slide easily. No more unpicking, it would not have survived. Then, fed up with it, I zigzagged round the edge, but even using a walking foot the borders shifted. 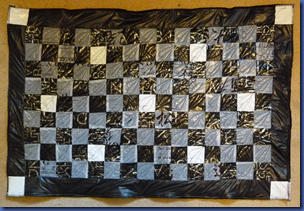 Told you it was bad.

But – I’ve learned a lot about what plastic works – the mail wrapper from Quilting Arts, which I get from a UK stockist whose name escapes me – what works less well – a Debenhams's bag -and what doesn't – bin bags, and a laundry bag from a Chinese hotel Cheese Major stayed at on a business trip in 2003*. [Never throw anything away.]

And I'm quite fond of her [Paddy, because I threw so many making her]. The ‘wadding’ is felt, so I’m hoping that by the time I’ve shrunk her and zapped her, the worst excesses will be disguised. The design concept is messiness – I decided I wanted something that was the antithesis of what you think quilts are – i.e. not comforting and cuddly – and messiness, wrinkles and holes just add to the aesthetic. [‘Ark at ‘er, again – AEE, for future use]

Did I have that idea in mind when I started? No, I started off as I so often do with ‘I wonder what would happen if…?’ and then made the rest of it up as I went along.

And after all, if Tracy Emin can make quilts which don’t reach the standards of the quilt police** why can’t I?

* I know this because the only things I could read on the bag were his name, the name of the hotel, and the date. Just before he came home he would have all his clothes laundered and then pack them still in their bags. He has always been very good at finding an easy way to do things.

** If you think the quilt police don’t exist, you haven’t listened to the comments of some more conventionally quilters on Ms Emin’s work. Er – no, it’s not well made – that’s part of the point.***