I didn’t mean to disappear…

but sometimes life gets in the way of art – and blogging. A combination of several insomniac nights and some unexpected events [some good, like an evening’s Babybel sitting, and some less good] left me with little energy for PMSs or PCs – or even SAMs – still lots of ideas, just no motivation.

The only thing I managed  was a revived interest in playing with Photoshop. I had been trying to work through a ‘Classroom in a Book’ but I've decided I much prefer working with my own images, not ones selected by the author. So I bought myself a companion volume to PFAEC – this one is Photoshop Photo Effects Cookbook. [PPEC.] 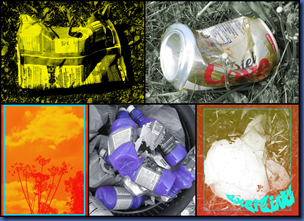 I like the effect of removing the colour from the background.

The books were written for an earlier version of Photoshop but I have managed most of what I’ve tried so far.

Apart from the pen tool.

This morning, after a couple of good nights’ sleep, I got up raring to go.

I intended to work through some of my ideas for free machine embroidery [which you may remember I don’t do], but started with a little ironing :>( and a bit of tidying. I have realised that if I tidy the work room first, even minimally, it clears my mind for later, more creative activities. And I find things.

Like the pin weaving board I warped up ages go with some left-overs from Daisy and then put on one side.

“I won’t get started on it now, but I’ll go and look for those bits of wood found objects I thought I would include in the weft.” [This led to a cat in a cupboard, so it has had to be left open until she decides to emerge.]

“I'll just push them through and see what they look like.”

“Not bad but I don’t like that bit of bark, I’ll go outside and look for a stick.”

“I could hang it up from that stick.”

“I wonder if this shrink wrap I tried making machine wrapped cord with* will work as a weft?”

“I'll just go on till lunchtime and then I’ll get the machine out.” 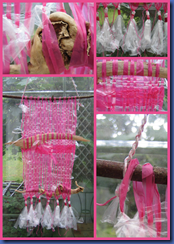 Bet you can guess what happened. I was enjoying myself far too much not to finish it**. Completed the weaving, made tassels [shrink wrap and floss], and a twisted cord [shrink wrap – surprisingly, but reinforced with floss], hung her in the window and took photos. Might not be art, but I reckon that’s a Personal Cloth, don’t you?

I was going to try zapping her, but like her too much to risk spoiling her. Gives me ideas about natural objects and plastic as well: this is turning into an exploration of plastic, rather than litter. [Told you I was weird…]

I might do a bit of reverse engineering, make some smaller pieces as ‘samples’ and try zapping them. How many times can I go into Superdrug, buy a packet of paracetomol [39p] and ask for a bag before they begin to wonder if I’m contemplating suicide?

* It kept catching in the hole in the plate and breaking. Black bin liner worked better – just.

Sorry you have had a trying week. I think Penelope is the most interesting thing [aka personal cloth] you have made in ages and this from a gal who HATES pink. Definitely has potential - natural found objects and plastic, magically woven. Brilliant. Well done you. Looking forward to seeing how this develops. By the way, I wonder what is the definition of a "natural object?"? I saw such a weird thing today: a picked-clean jointed sheep's leg bone, balanced in the crook of a tree, about 5 feet up. I realise a dog-walker probably confiscated the bone from the pooch, but even so it was weird. When is a natural object also litter, I wonder? xx:)