Going round in circles.

I can't remember if I mentioned that a few weeks ago we went down to Walford Mill to see their 'Going Full Circle' exhibition, but we did, and we enjoyed it very much, especially Jin Eui Kim's  ceramics. (And the salmon salad in the cafe.)

In my my bedtime reading I came across a brief mention of the old technique of sewing circles by fastening a drawing pin to the bed of the sewing machine with masking tape and pinning the fabric to it. So circles became my next repetition - concentric ones, that is. 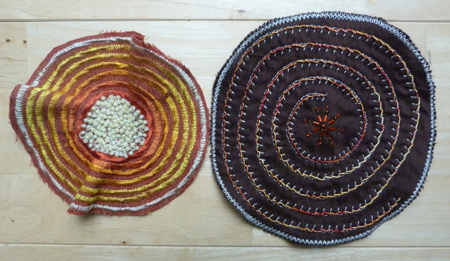 I have played with the idea before, so on Friday I plunged in without much forethought. Big mistake, as you can see. Another opportunity for learning.

On the right, what happens when the drawing pin moves slightly. If life gives you non-circular circles, make spirals. I abandoned the drawing pin and sewed a presser foot's width away from the previous stitching, more or less. I had intended to change the stitch pattern on each circle, but obviously that wasn't going to happen, so it ended up a bit boring. I tried whipping the stitches, and adding a few beads -  O.K., it's still boring, but slightly less so.

On the left, what happens if you work wide satin stitch without a hoop or a stabiliser. You get distortion - interestingly, there's more on the straight of grain than on the bias. I quite like it, and it has possibilities - W. suggested a floppy hat brim. The centre is too wide, and I went a bit OTT with the beads.

So yesterday, with the benefit of hindsight, industrial quantities of stitch and tear, temporary spray adhesive and a walking foot, I started again. 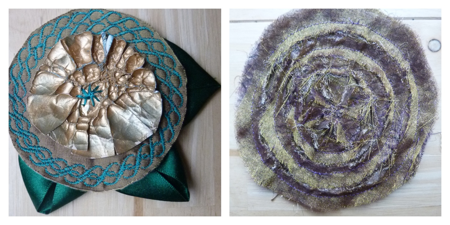 First the silly ones. (There are always silly ones.) The one on the left was inspired by the bit of zapped Tyvek left over from something else. You may not be able to tell from the photo, but those two rings of embroidery meet up perfectly. (I'd like to say it was skill, but it wouldn't be true.) It looked like a rosette so I wanted to add ribbons, but the only ribbon I had was too wide, so it turned into prairie points.

The second one is several layers of metallic organza scraps. It was a response to wondering why fake chenille is always in straight(ish) lines. The answer is that the concave side of circular ones is reluctant to fluff up. However a bit of rough handling worked wonders. 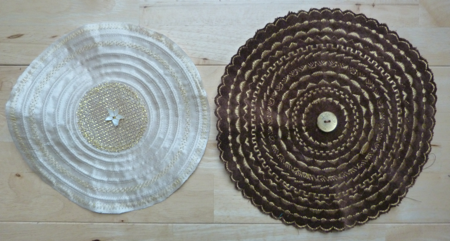 Then on to some bigger ones. I love the one on the left -  it makes me think of wedding dresses, maybe because it is made of polyester satin. I used a twin needle for most of the circles, with some gold embroidery on the central disc of gold mesh, and in the too wide gap. (At that stage I hadn't worked out the solution to accurate positioning of the drawing pin. Tiger tape, if you want to know, attached to the machine bed in line with the needle.)  The star shell in the centre is because I'd marked the centre with washout pen and it didn't. (Yes, I know, always try it out first...)

Centres are a bit of a problem: the drawing pin can leave a hole and the inner circles end up relatively big because you can't get the drawing pin very close to the needle, especially using the walking foot. Hence the button in the middle of the brown one, which is gold thread on brown velvet.

Today, flushed with success, I got a bit over-confident. As part of my 'using up stuff I've bought and never used' initiative I tried Trapunto with soluble thread. Which was not as easy as the beautiful examples here might make it appear. Getting the positions of the soluble thread (on the wrong side) and the stabiliser (on the right side) was easy to get wrong, and removing the stabiliser, becasue it wasn't where it should be, removed some of the thread as well. So I had to reapply the stabiliser to repeat the stitching. Then I tried to add some machine embroidery to one but gave up when the thread starting breaking repeatedly. I can't show you these because they are drying after I washed out the soluble thread: that bit seems to have worked. Idon"t think I shall be repeating this any time soon - does anyone know any other use for soluble thread? 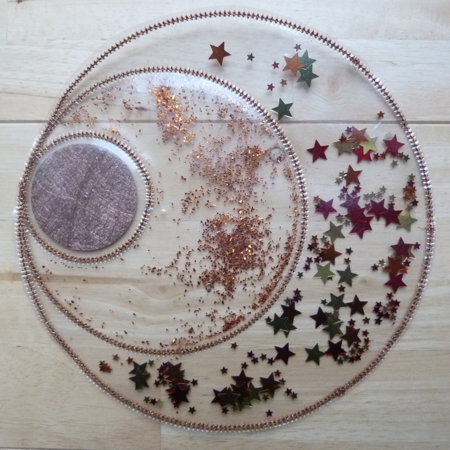 The best thing today was this. It finally dawned on me that the circles didn't have to be concentric. Working out how to do it was a little more difficult, A-level Maths or no (it was a long time ago!). I could draw what I wanted with a compass, but translating that to the drawing pin system took two goes. Fortunately I have a lot of plastic pockets and of these bits of bling. Yes, that's a plastic pocket - and it took maths to make sure the final circle wasn't bigger than the pocket.

Tomorrow it's grilon thread to be used up, so shrunk circles, concentric or tangential, or other arrangements yet to be decided.