For a while, at least. I do have some bits of metal left, but no more of the nasty craft vilene I used for the pages, so it's time to move on, and find something else to do obsessively repetitively. 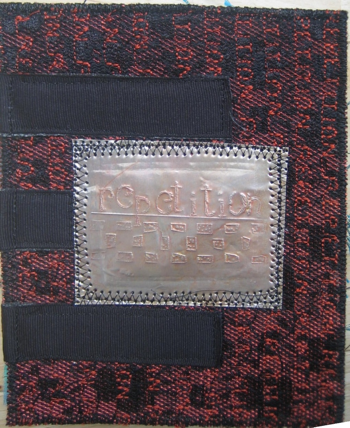 This is the front cover - the name plate was the first thing I did when I started playing around with metal, sewing it on the cover was the last thing.

The cover is layered felt, wire form and lace, with boring repetitious machine embroidery all over it. The tape is recycled - it says 'Montezuma's' on the other side. 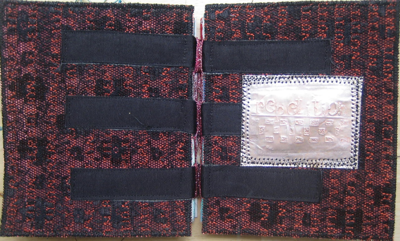 The binding is from Keith Smith's 'Smith's Sewing Single Sheets', which I chose because all the books told me to bed the metal on nasty Vilene,which was too thick to fold. Smith says that a binding over tapes swells at the spine, and it does, although it doesn't look like it here - but not quite enough to accommodate all that lumpy metal. Still, I like a book whose contents are bursting out of the covers. 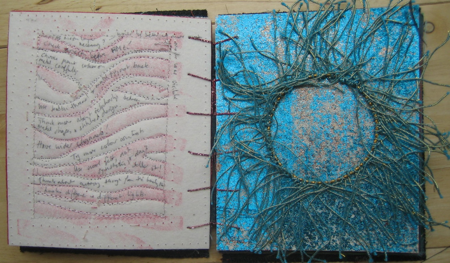 The instructions were to punch the holes for the binding half an inch in, but after I'd done so it dawned on me that, as the pages aren't paper, half that would have done. And I could have tried harder to get the stitches straight. The metallic thread wasn't really a sensible choice, but it looks good with the cover. 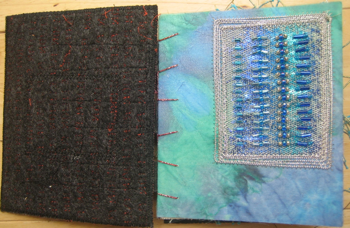 After all this experimentation, I've come to the conclusion that I like setting fire to annealing the copper or bronze to colour it, but I am not interested in painting or embossing it, as recommended by well known authors. (And aluminium melts... Ask me how I know.)

And if I am going to use metal again, it will be wire mesh which I can stitch into or bead, I really enjoyed that, even if the edges were a bit scratchy. I liked the silly ones too, but the idea of lots of free machining round the edges of stamped or embossed bits had no appeal at all - now there's a surprise.

What next? Not sure. I've got several ideas, and a quiet day tomorrow, as Wensleydale has chauffering responsibilities. Watch this space.