What did I learn in school today?

Except that it wasn't in school, and it was several days. Why spoil a nice title for the sake of accuracy? 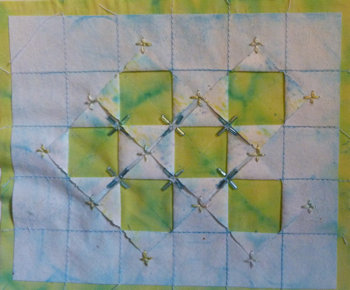 I learned to love Evolon, from this technique from Judy Fairless's old WOW article. OK, the colours aren't wonderful, but I love the look of the little folded flaps.

That led to a bit more experimentation, and a lot more learning.

I learned that my machine does not like sewing two layers of Evolon together, which led to the abandonment of one idea and the development of two more.

I learned that not all velvet is cotton or silk, and therefore it is a good idea to test the backing fabric before soldering the Evolon. Synthetic velvet solders very nicely, till you meet the cotton backing.

I do have plans for this one, by the way. Whether you ever see it again depends on how they work out. 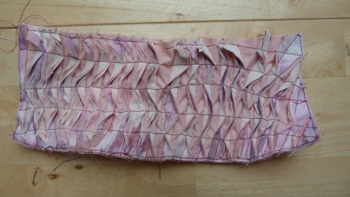 I learned that my clever idea to use the soldering iron to make fake chenille was not so clever after all, because the edges of the layers of fabric get sealed together. Obvious, really.

I did think about trying to separate them all, but I don't have the patience. So I switched from burn to slash in mid piece.

This was a positive experience, however. The burned half, on the right, is more rigid than the slashed half, possibly stiff enough for 3D pieces, and has quite an interesting texture. Plus the process broke up the not very interesting paper bag print quite nicely 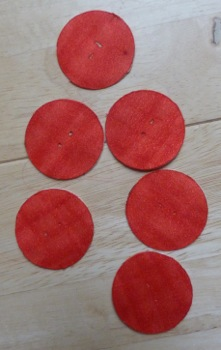 I learned that Fairless's suggestion for making Evolon + sheer 'buttons' is fun - I think Margaret Beal uses a similar process. However, these are too big, a bit boring, and not stiff enough. 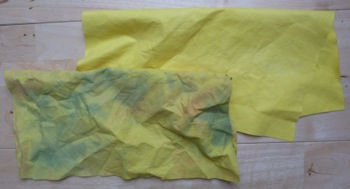 I'd read on line somewhere that you can colour Evolon with acid dyes, so I tried it once I'd found the dye (easy), some vinegar (harder, we only had wine vinegar but it needs using up) and my dye pan (hardest, until I remembered that I'd thrown out the enamel one without a lid because I'd bought a huge stainless steel one with two steamers and a lid in a charity shop).

The top piece is as it came out of the dye pot, the other was a further experiment with some microwave dyes. My supplementary learning was that the microwave dye is very  concentrated, so I ended up washing a lot of it out before nuking the fabric. In future I shall dilute it a bit before using.

I also learned that it would have been a good idea to think more about the colours I used. 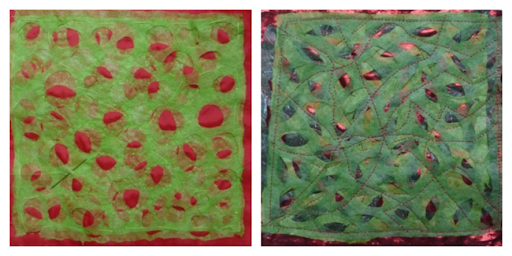 My idea for using multiple layers of florists' wrap was not such a good one. Bigger holes? Fewer layers? Different colours. Don't bother anyway, the burnt paper original looked much better?

(If you don't mind, we won't talk about what I did with the holes from the one on the right - the worst bit of free machine lace in the world just got worse and worse the more I tried to rescue it. So Lesson 8 was to stop and fix tension problems, not just carry on regardless.)

I've still got a few  too many ideas to try with Evolon, but Babybel, the VHC and their entourage get back from France this weekend, so it will be back to work for granny and grandad next week.

It was worth trailing north through 30+ degree heat and traffic jams to go to Waddesdon Manor yesterday. I wanted to go when I found out about this, but when I found about this too, a visit became essential. 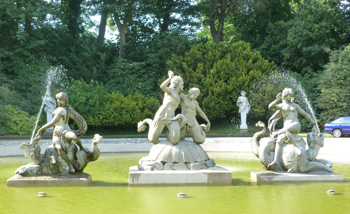 Both exhibitions were great, the house is amazing, the blue badge car park looks like this, and the restaurant provided the nicest lunch we'd had since the salmon salad at Walford Mill.

All in all it was the best lesson I've had this week.