After my less than exciting efforts last week, I've managed to come up with a few things I like.

This is more Evolon, coloured with transfer paint on one side and metallic paint on the other, then soldered.  Still a learning opportunity - I attached it to the red fabric before I soldered it, and some of the gold paint was transferred to the fabric. It didn't look bad, but I decided to cover it with some of the worm-like strands of cheap purl I bought when I was doing City and Guilds, and never used. Yet more stashbusting!

For some reason it makes me think of military uniforms. 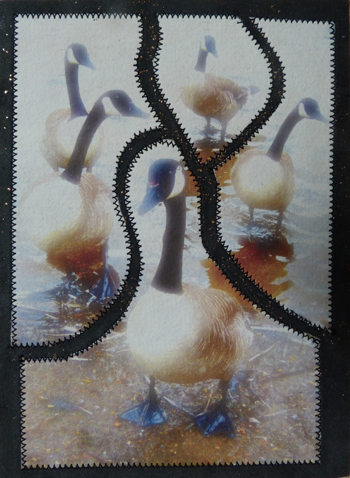 This is a photo I took at the  ducky goosey place on one of our twice weekly visits.

I used an app called Griditor on the photo, printed it on Evolon treated with Inkaid clear, which made it a little stiffer, chopped it up with the soldering iron, and sewed the bits down on somthing which feels a bit like leather but probably isn't. Oh, I had previusly treated the 'leather' with bonding powder and copper foil. I tried several experiments with foil today and this was the only one that worked, the others were - shall we say 'lacking in sublety'? Even another attempt with bonding powde, on Evolon in this case, came out much too heavy. 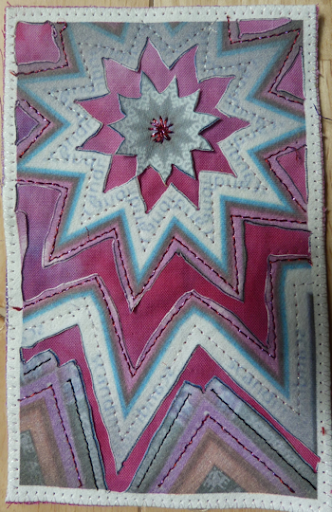 Another photo - this one was of a shelf of books, believe it or not. The app looks like Decim8 but might have been something I've got on Big Mac, I can't really remember.

It's backed with wadding and hand dyed cotton. I cut out some areas with the soldering iron and then machined it down. Quite a lot of machining has been going on for someone who professes not to like it, but you will notice that it is not free machining. 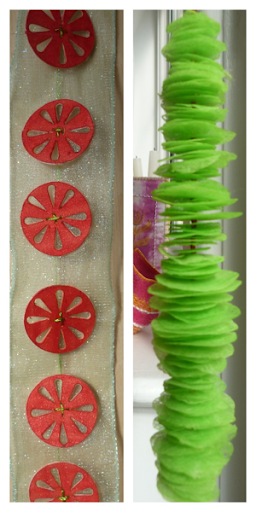 And finally, two old aquaintances revisited. I decided the soldered buttons could be improved, and fortunately the little metal template I bought from Art Vango on the assumption that it was meant to be used with a soldering iron had two petal shaped holes just the right distance apart...

The caterpillar like thing on the righ is the holes from the unsuccessful soldered holes in Lutradur experiment, just strung at random with red beads in between. It feels lovely and is very drapy. No idea how I could ever use such an idea, but a least the holes weren't wasted.

Speaking of caterpillars, the VHC and his big sister are due to descend on us tomorrow, so little in the way of needlework will be done until we return them to their doting parents - unless Babybel brings hers.