in the quest to use up - or at least try out - stuff I've bought and never used. This time I've moved from Evolon to metal. 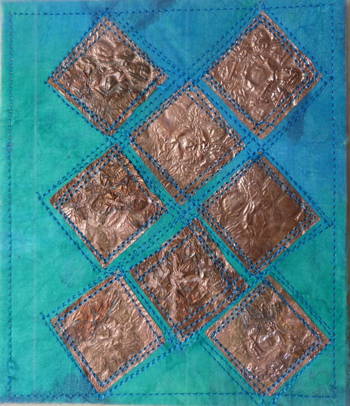 My first, uninspiring attempt. The copper shim was coloured by a 48 hour soak in balsamic vinegar, but unfortunately the lovely blueish colouration washed off when I rinsed it. The shim tore when I tried to emboss it, and my carefully worked out design lined up in the planning stage but not when I sewed it down. (The space at the left is deliberate, as all these samples are going to be bound into a book.)

I did manage to emboss it in the end, by putting an Indian printing block on it and hitting the block with a hammer. Very satisfying after the previous frustration. 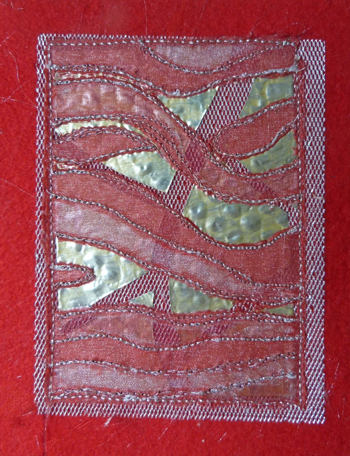 Number two is layers of mesh, white metal shim coloured with gold paint, and sheers, free machined with some difficulty and swearing, then cut back. I think the right edge of the mesh needs a trim...

I don't like it (the arrangement of the shim shapes doesn't fit in with the lines of the embroidery and I don't like the gold paint) but Wensleydale does. He suggested cutting through from the back under the mesh, which I would do if I hadn't written notes on the Vilene backing. 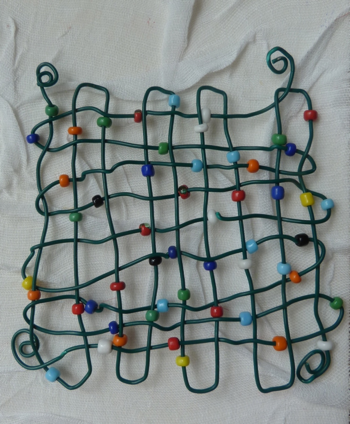 (Work in progress - it needs stitching down.) This one involved even more swearing, out of all proportion to its apparent simplicity. To return to a previous theme, I learned to use thickish wire, keep the weft and warp well spread out, and add the beads as you go along.

The background is deliberately crumpled to bring out the shadows. 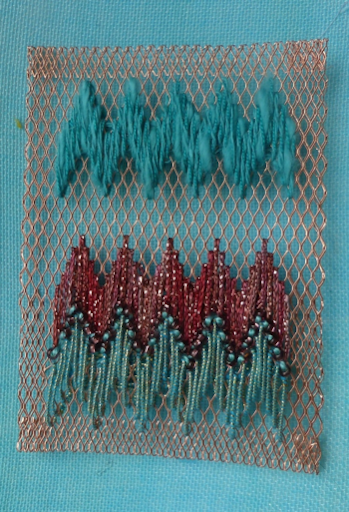 This also needs stitching down. It was inspired by a one-line comment in Janet Edmonds' book 'Three Dimensional Embroidery', that you could do canvaswork stitches on wire mesh. Well, you can, but there is one difference between canvas and wire mesh - canvas has a square grid and mesh doesn't. I had intended to use the leaf stitch I used here but that has diagonal stitches and sorting out how to make them work on a diagonal grid was more effort than I was prepared to put in.

I resorted to straight stitches, but then I had to decide whether to make them run this way, which makes for long, closely packed stitches, or at right angles (short and more spread out).

However I like the result, and I can see myself going back to this idea later. 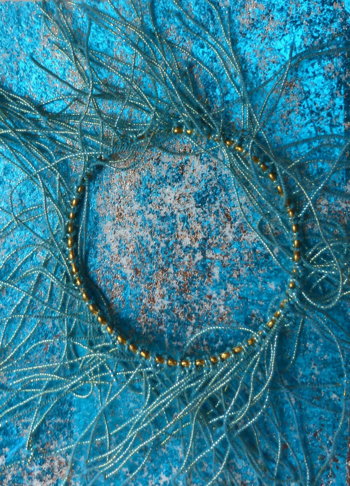 And the final, (also unfinished) and maddest piece. 'Metal' here is very loosely defined. Under all that hair is a charity shop bangle in a reddish metally sort of substance, there is yellowish metallly sort of stuff wrapped round the Indian thread - and there is a little bit of foil in the background. It was going to be copper, but the copper layer was patchy, so I added some blue, which adhered itself rather more heavily than I had intended. But I have read advice on 'how to knock back the shine' of foil once too often, and decided that the piece was going to be shiny, as well as hairy.

I can't say I am likely to repeat this - for one thing I don't have any more bangles - but it's fun!

Love the comment about the hammer :-). Check out Kelly's/Fire blog, she is writing about working with metal as well