I spent the afternoon playing with my ‘light box’ [a desk lamp under a glass coffee table] while I worked on one of the tasks from the college session I missed in January because of the snow. [I was going to type ‘way back in January’ until I realised it was only last month – so much has happened in the meantime!]

The first task, which I did a while ago, before the great deadline trauma, was to make marks on tracing paper to sounds. Not knowing what the real sounds should have been, I found ‘Late Junction’ on BBC I-player. The programme is strongly recommended if you like your music quirky.

Then we had to layer the tracing paper, put cart 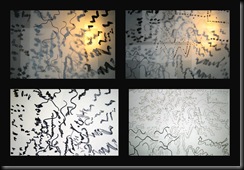 ridge over the top and a light underneath, and trace the marks. Like this.

Interesting, but I'm not sure I can go anywhere with them. The next step is supposed to be a collage inspired by the tracings, but – er – they don’t inspire me. 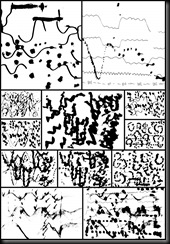 So I tried scanning the tracing paper  in various combinations.  Not sure I see a collage in there – but I see lots of stitch-like marks.