A new book, an old book, and the beginnings of a collage – sort of…

It’s been a fairly productive day, despite feeling distinctly uninspired for most of it.

I finished another sketchbook – one which I started a while ago when I painted some paper in the style of Frances Pickering. Although I loved the results, the paper has been hanging around irritating me because it raised my workroom just above my mess tolerance level – although that is pretty high. [Put it away? Where?]

Yesterday I started trying to assemble the painted pages – and a few more - into a book and made a mess of punching the holes in the spine. So I went and sulked in the bath. 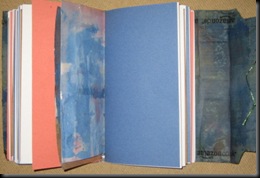 Today I had another go, after rescuing the spine with a strip of duck tape. [‘If it moves when it shouldn’t – duck tape. If it doesn’t move when it should – WD40.’ Can you tell I used to live with an engineer? Although actually he is this sort of engineer. He’ll hate me if he ever reads this <g>.]

It was a bit of a fight – but I won. I think I have gone about as far as I can with the repurposed Amazon mailer sketchbook – this one weighs 750 gm and has [reaches for calculator] 224 pages. Even at my planned one drawing a day it’s going to take the best part of a year to fill – and I am not achieving one drawing a day, by any means.

I acquired two other books today, courtesy of ABE books and the postie.

I’d read about Mariska Karasz on The Textile Blog [well worth reading if you are at all interested in textiles] and I really liked what I saw of her work. I couldn’t quite afford the book about her work – the one I did buy is a more of a teaching book, but it does have some examples, and lots of lovely line drawings in that ‘ethnic’ style that was so popular in the 40s and 50s.

I have been interested in the work of Hannah Frew for a while – chiefly because we were told we should include her in the C&G history of British embroidery, and I found it very difficult to find out much about her! So I was pleased to find an article about her in the current issue of ‘Stitch’ – and even more pleased to find she had written a book – albeit in 1975.

Unfortunately although both books were very reasonably priced – I had to get them from the US, which put the cost up a bit … 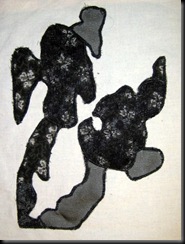 And finally – after joking about an embroidered collage for drawing studies – I started one.  Cut back appliqué, inspired by a section of one of the scans I showed you yesterday. But in reverse, because I worked the machining from the back. 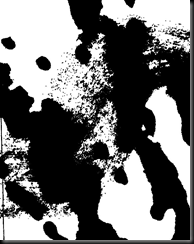 It is looking a bit unbalanced at the moment but I’m hoping some hand stitch will help that. And after all – ‘it is only a sample’.

LOL I love it when you digress