although I have been a busy one as well – deadlines for college are looming after half term, and although I thought I’d kept reasonably on top of things, there still seems to be a lot to do.

Wednesday’s degree session was very enjoyable, despite including an afternoon of drawing. In the morning we had a lecture on Fine Art Textiles – which started with the history of embroidery [been there, done that, wrote a tome about it] but then moved into looking at textiles in art, which was, I'm ashamed to say, pretty new to me.

The afternoon’s task was to make a mind map on the subject of ‘line’, then make 50 30-second sketches inspired by the mind map, and then ‘become obsessed’ about our favourite thumbnails and produce a more finished piece. And in the middle we’d have a tutorial …  all in about 3 hours.

Mind maps – no problem, after all I used to teach mind-mapping. So, because I usually run out of space when I make a mind map, I used a piece of A3 and wrote small. But although I wrote a lot, I didn’t really get very creative – it was all a bit literal. Like straight, dotted, wiggly, parallel etc. etc. etc.

So I decided to get started on the thumbnails.

I didn’t mean to make a book – honest. I only realised it was a book when a fellow student commented on the fact that I was making one ‘as usual’. How well they know me …

What I thought I was doing, was using an idea in one of the new Beanery and Littlejohn books [‘Constructions’ at the bottom of the link– it’s good].

B&L suggest making a concertina of paper, folding it up and making a series of line drawings on it, without being able to see the others – a sort of visual Chinese whispers. B&L used architecture – but I used lines.  Like straight, dotted, wiggly, parallel etc. etc. etc. [Most of the other students did line drawings, rather than just lines – perhaps because they are more confident drawers than I am.]

I found that the requirement to do 50, quickly, made me use different media, and get more and more inventive about what a ‘line’ was – lines of dots, weaving, wrapping, slashes in the paper. I did do some ‘proper’ drawings too – of my mug which was sitting in front of me – but using two different pens held together, or with my eyes closed, as well as the conventional way.

The resolved piece was more difficult – done in a bit of a rush at the end and, I realised, on too big a scale. What worked for the thumbnails didn’t work at 8 times the size. 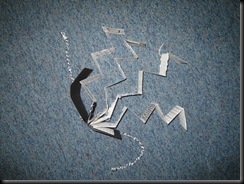 Yesterday I made the concertinas into a book – although they are doing their best to escape.

Funny how you don’t realise your lettering is wonky till you look at a photo.

I also did some more work on the unresolved piec 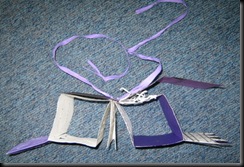 e - which went so well that it is now in the bin.

This is the second try.  I bet you’re  surprised that it’s another book. Same size, different format. 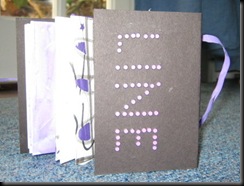 As instructed, I became obsessed.

After all that we had an enjoyable trip to the Watermill with Mr and Mrs C to see ‘Heroes’, which was very funny and a bit sad, and just what I needed in the middle of a stressful week.

Oh – and the tutorial? It was better than expected. I was told my drawing needed to get freer, and some useful suggestions were made.

The drawings by Babybel which I had included were admired just a little bit more than her granny’s efforts, though. Quite right too.

Celia,
I like the lines made by the escaping book in the top photo.

As you had not yet implied the direction your line explorations had taken, at first I thought it was done on purpose to reflect zigzag lines etc.

Good luck. I am glad you are documenting the course. I had been thinking about doing it, but now I am not so sure. :)
Sandy in Bracknell