A Tale of the Unexpected

Last month Sandy posted about her unexpected batch of goodies from Dylon. Emma Forbes from their PR company had spotted her post about  snow dyeing, and sent her a batch to play with.

‘Lucky lady’, I thought, ‘Things like that never happen to me.’

You can guess where this is leading, can’t you?

On Thursday I, too, had an e-mail from Emma, who had  seen my post about snow dyeing with Dylon. She kindly  offered to send me some more dye because I seemed to be using older ones.

So at an ungodly hour this morning the postie brought me this lot.  Lovely dyes and some Colour Catchers to feed my embroidering-on-Colour-Catchers habit.

And I realise just how old my dyes were - when did Dylon start putting their hand dyes in packets rather than those little tins which were so difficult to open?

If we’re unlucky there might be some more snow dyeing in my future – but I think it’s more likely to be conventional dyeing – well, as conventional as my dyeing ever gets. As Dylon will dye both viscose and wool, I'm tempted to experiment with viscose/wool felt to see what happens. Watch this space.

At the moment, though, I'm trying to stay focussed on collating everything for the various hand-in dates after half term. I’m sure normal human beings would just put everything into a bought portfolio – but those who know me will not be surprised that I decided to make one. [I blame A. – half way through C&G she made a remark about imprisoning embroidery in plastic – or words to that effect, it’s been a long time – and I started mounting samples in books. Can’t blame her for having to make them myself, though – that is entirely my own obsession.] 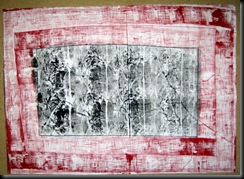 I have already made an A4ish sized one – but needed something bigger. This is the front cover - roller printed slubby furnishing fabric from the Fent shop in Skipton, backed with a piece of leather cloth from who knows where. It is A2ish in size, because that was the size of the leather cloth. I have painted some grey board for the back. I will probably bind it all together with binder posts – but I’m also thinking of a stick and elastic binding. I don’t want to use anything too permanent as I expect to add more samples as the course goes on.

Of course it is too big for most of my samples – but better too big than too small. I  am trying to resist the temptation to make an A3 one as well – which smacks of procrastination. What am I procrastinating about? Writing my reflective journal entries to go with the samples. Normally I enjoy writing – but this is new, unknown and scary …