My lack of motivation continues, after the burst  of activity last week getting ready for the first two deadlines.

And as I had to get up early to take best beloved for his haircut [every one individually cut] I had a lot of time on my hands.

So – shock, horror - I tidied the work room.

You have to understand that the word ‘tidied’ has different meanings for different people. My mother, for example, would not have regarded what I did as tidying. She had plenty of junk, goodness knows – but it was all put away. [I won’t tell you what it was like clearing her house after she died – I will just say that I doubt anyone else ever had so many drawers full of empty plastic bags.]

However, the workroom is tidied, in my meaning of the word - i.e. you can now see most of the floor and some of the worktop…

I even sorted the teetering heap of tearsheets and print outs. A lot ended in the recycling bin –‘Why did I ever think I wanted to keep that?’ – but others got put in the appropriate books and files. I now have a file labelled ‘Things to do when uninspired’ – things I’ve kept telling myself I’d get round to trying one day.

So this afternoon – I tried two. 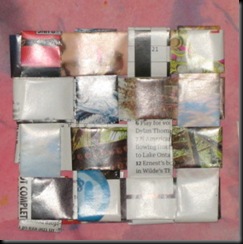 This – from here – except Jessica’s are much more stylish than mine. No, I don’t know what I’m going to do with the idea, but I like grids and weaving. I think it might be interesting to try in fabric. 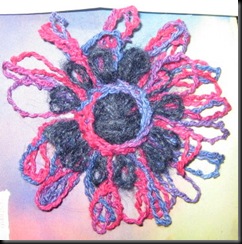 And this from here, because I bought a flower loom ages ago and thought it was about time I tried it out. [As usual my camera has failed to catch the nuances of colour – the two layers go together a bit better than they appear to.]

Flower looms, it appears, require a lot of thread and a lot of patience – more than I’ve got. I don’t see any of those flower loom blankets in lovely acrylic yarn in my future – although this Flickr page almost makes me change my mind … 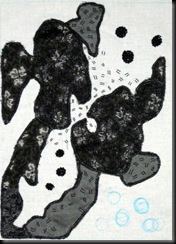 And then I wasted some time trying to find some buttons to add to the collage – which is looking increasingly odd. [It reminds me of something but I  can’t think what!]

The blue circles are washout marker, and will shortly be filled with stem stitch spirals.

somehow never the right ones. I thought I had a lot of little black ones, but it turns out I don’t – probably because I made a necklace with a lot of them years ago, pinching an idea from an art teacher of my acquaintance. [Heavens, don’t I ramble?]

I decided I didn’t like it with buttons on anyway. I did find some beads –although I seem to have fewer black beads than I thought. [Blame my aunt – and me – for my collection of beads – mum wasn’t in to those. And the fabric collection is entirely my own.]