One of the drawbacks of using mailers as book backs is that you have to cut down standard sized paper – which leaves you with a problem. Do I throw the leftovers away? Do I use find a way to use them - to make more books, for example?

So when I found these instructions and the cereal box booklets here, I had to have a play. 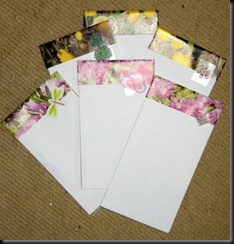 These are the mini notepads – a bit plainer than the ones in the instructions, but good for sticking in a pocket. 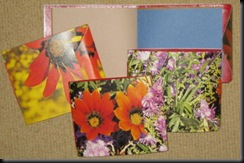 And these are the cereal box books – except mine used a photo  paper packet, not a cereal packet, as we don’t eat that sort of cereal. The covering  is old calendar pages.

We won’t talk about the mistakes, which were entirely my fault – it probably wasn't a good idea to change the sizes the first time I made them – or to make so many – or to do them both at the same time.

But I like them. [I once saw Dick Emery in a restaurant in Bournemouth and he looked exactly as you would expect him to. And so did his female companion.][Note to non-Brits or those too young to remember, Dick Emery was a comedian whose punchline was ‘But I like you’ – delivered while giving his interlocutor a playful tap that knocked him flying – and while wearing drag. Naturally. But I digress.] [If you don’t like my digressions, blame Wil for encouraging me.]

Meanwhile, Quality Control was keeping a careful eye on the decorator. [Not m 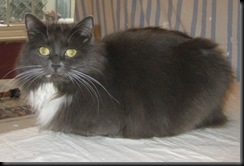 e, I don’t do decorating – although I have got designs on that tin of white emulsion.

That stripy thing behind her is a cupboard wearing a duvet cover. Honest. Would I lie to you?