Give me a few sunny days …

and I get creative again. even if Wensleydale did most of the work in the first instance. 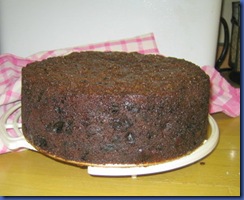 A week late [it’s a Cheese tradition to make Christmas cake in half-term week] but our now traditional recipe produced this.

Something else turned brown – but then went silver.

Thanks to Gill for her inspired suggestion that he is a dodo – but I think he may turn into a phoenix, [some symbolism there, perhaps?] with the addition of some gold and copper paint and possibly a few flames. [This layering of metallic paints over a dark base is something I got from Terrie the tutor – it looks great when she does it. Hmm – we shall see.] 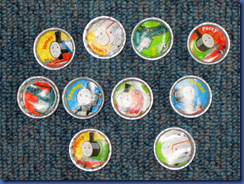 I also finished these. Yes, they are pictures of Thomas characters in bottle caps. It’s a matching game for a certain Thomas-mad toddler, from whom we had an unexpected visit this afternoon.

Wensleydale has suggested using milk bottle caps as they are a bit less fiddly [not the foil kind, the coloured plastic ones from supermarket milk!]

Yesterday I went a bit mad – well, even madder than usual. In one of my books full of interesting ideas I’ve nicked found there was a picture of a cone with sticks round it. 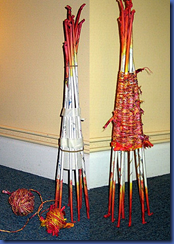 Which led to me spending Friday afternoon making miles of cord from ripped up fabric, and Friday evening weaving and reweaving said cord round some left over giant spillikins. Not much like the original [good!] but I like it.

Babybel inspected it very carefully and decided it was a tower.

It isn’t quite finished – I want to add a few more rounds of the shinier cord round the top. 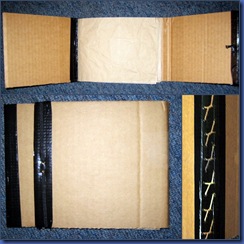 And finally, this afternoon, I got round to doing something I started when the weather was bad and I was quite down. [If all else fails, make a book.] But then the sun appeared and it all got put to one side.

However, I was inspired by a small sketchbook Terrie the tutor had, with her ideas for soft sculpture, and that encouraged me to get back to this one – made, as usual, from recycled packaging. The binding is from Keith Smith’s ‘One, Two and Three Section Sewings’: I like the way the variegated thread makes the crosses change colour, although I made a mess of counting the holes.

The only downside to today has been waiting in all day for an order from Amazon – we paid for next day delivery and didn’t get it. Which means contacting Amazon to demand my £9 back, and waiting in all day again on Monday in the hope that Citylink might actually deliver it …