Slaving over a hot computer.

We are coming to the end of module 6, which is preparation for Module 7, the real 3D piece. [Yes. all that messing around was preparatory work.]

So I had a look at the assessment criteria for Module 6.

‘Show evidence of contemporary contextualisation appropriate to the project.’

‘Demonstrate the ability to evaluate this project.’

[Pause while i rescue the world’s dimmest and clumsiest cat, Quality Control, who just fell off the printer. And judging by the way she’s looking at me, it was my fault. For some reason she likes to sleep on the printer, and she has trodden on the switches so often that now she’s the only person pusson who can turn it on or off.]

But I digress. I decided I’d better find some contemporaries in order to contextualise. [Evaluation can come later.]

I need to identify people whose work bears some relationship to  what I’ve been doing, but not the p

eople we talked about in class, because that would be too obvious.

Well, you know what it is like on the internet. You Google one person [in this case Jean Draper, because I love her work, some of which inspired the bottom bit of this]. One thing leads to another and several hours later you have a list of names, but the ones you think are most interesting are the hardest to find out anything about, and  And you end up with lots of names for the approaches you are most interested in, but not many for others. 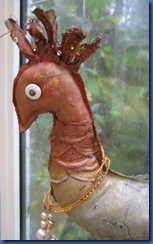 So I’ve ended up with several people who include tiny, constructed or found objects in their work [Penny Burnfield, Gwen Hedley], but I am finding it more difficult to find someone who makes stuffies, [not necessarily like Rambo!], whose work I like, [i.e. definitely not twee]  and who we didn’t discuss in class. 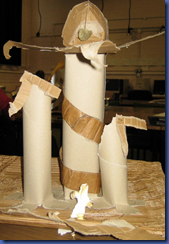 For this Wednesday’s work there is really only one person to use to contextualise – unless you know anyone else who works in corrugated cardboard?

Of course, Jackie Langfeld’s work is much more impressive than my efforts, though to be fair to myself we were working to a brief which did not inspire anyone's best work – to make an environment using only torn card and staples. to hold the little stone we’d been given.

We all ended up much more attached to our stones than we were to the creations.

It was fun, but I don’t think I'll be taking it any further…