Here’s one for the railway buffs…

if there are any out there.

This week’s topic in Drawing Studies was ‘Landscape’ – we were asked to bring an image of a landscape which was important to us and make sketches from it, preparatory to producing a stitched piece. ‘Sketches’ could include computer images – so I pottered around with Picasa and GIMP and some of my photographs. 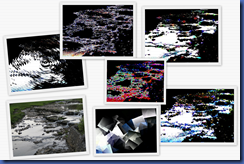 I quite liked this one, 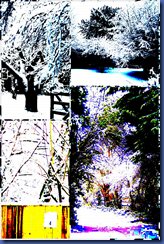 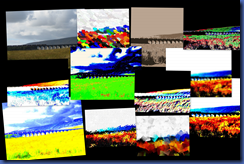 but in the end I went for this one – the version middle right. [How long have I been using Picasa without realising that you can move the pictures around in ‘Picture Pile’?]

The original is top left,  and for those who aren’t married to men with an [always denied] interest in railways, it is the Ribblehead viaduct on the Settle – Carlisle line. I don’t think it is ‘important’ to me, I just liked the mucked-about image, and the one thing I didn’t want to do was a conventional landscape. 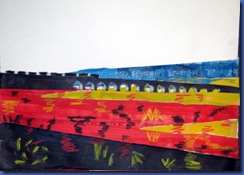 I took some painted papers to college with me and made a torn paper mock up. The squiggly lines were an attempt to represent the texture/stitch – it looked better without.

Then I made several attempts to do the same thing in fabric, brought it all home and started again. 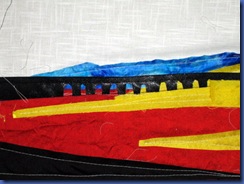 This is where it is at the moment. It has some machine stitch holding the viaduct down as well as machine tacking. But I didn’t get round to selecting threads before it got dark, so I have a selection of red, yellow and blue embroidery floss waiting to be matched in daylight – although the dark blue is going to be problematic as it is almost violet and I don’t have anything like it. [I’m using floss because I want to use finer thread in the background, getting heavier as it moves forward.]

I also have to decide on stitch – I was going to use free cross stitch/herringbone, but I'm veering towards running stitch [again], or possibly fly. Anyone got any bright ideas?

hey, I definitely like the look of the squiggles. It lifts the piece from being flat.

Couldn't you do random free stitching...if not by machine then by hand?
Sandy in Bracknell