A productive day at home – very pleasant after all the rushing about earlier in the week.

I spent a lot of time sewing in straight [ish] lines on this.  Mostly black, but with a bit of bobbin work with some thick magenta thread I’ve had for years and never found a use for, until now. 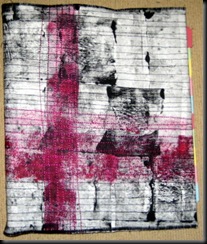 Then it was assembled into this. There is going to be so much paperwork for the degree, I decided I had to put it into a lever arch file. and as it is illegal for embroiderers to have nude lever arch files, I had to make a cover for it.

It isn’t really distorted, it just looks that way – and I think I need to find some narrower dividers.

I also [sharp intake of breath] did some drawing. When I was Googling around looking at drawings for ‘Drawing Studies’ I found this – which I think is beautiful. 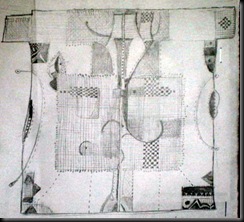 So today I tried my own version.  A bit out of scale, but I enjoyed doing it – and realised in the process that it is like a combination of a technical illustration and a doodle. I think any competent sewer, given the right fabrics, could make that garment from El Salahi’s drawing – though possibly not mine …

Last night I also got started on the official homework – reading an article on ‘Modernity and Modernism’ and answering some questions on it – and then thinking about this, and formulating an argument either for or against it.

The article isn’t too bad – only a few words I never knew existed - but the answers don’t leap out at me - and assessing the Duchamp work is harder than you might expect – for me anyway. I'm not sure if we’re meant to research academic opinions  - which I was trained to do - or just use our own reactions – which wouldn’t really constitute an argument, to my mind anyway. [I shall have to resist very very very hard the temptation to say that Duchamp was just taking the p*ss – although according to some of the things I’ve read, he was.]

Still – it’s a degree, I didn’t expect it to be easy – and I learned a lot from the article and associated Googling. Just got to put it all into my best writing [or, preferably, my best typing – we want the poor woman to be able to read it, don’t we?] for next Wednesday. 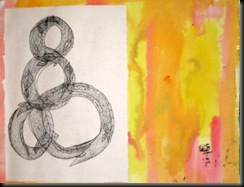 Here’s a bit more of my drawing – aren’t I getting brave? This was inspired by the rubbing I showed yesterday, but it developed a life of it’s own – and a few leaves.