for this year at least. And after taking down the display yesterday I felt very flat – just like I used to do after exams all those years ago!

So nothing much else was achieved yesterday apart from cooking and vegging in front of the telly, watching the Tour de France. 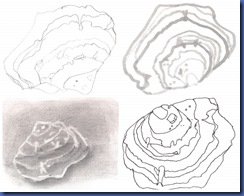 I did manage something this morning. Some more shells. [I admit it, I’m fixated on this rather boring shell.]

I did turn it round to draw it from a different position – and I experimented with different media – pen, graphite, ink and a cotton bud, and rubbed out graphite and charcoal – which is the one I like best.

I also played with one of the pages in the homework

book which had been dribbled and splashed with Brusho before it became a page.

It looked to me like a landscape so i added some oil pastel to bring out that effect.

It was only when I was photographing it that I realised it might be something else. Though I'm not sure what that makes the sun….

And this afternoon I vegged out in front of the TDF again.

A few days ago Cheese Minor, who is the original cycling fan in the family, wrote on Facebook that the great thing about the Tour De France was that Brits couldn’t be disappointed.