When I said I was getting bored with drawing…

I may have given the impression that I wasn’t going to do any more for a while – and, indeed, I didn’t intend to do so. 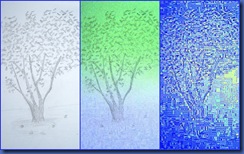 Two were serious, proper drawings – I’m even quite pleased with one of them, the one on the left. The other two are some of the results of playing with ‘Effects’ in Picasa, and one of them may become no.43 – probably the one on the right, which reminds me of Mondrian's series of apple trees – without being anything like them! 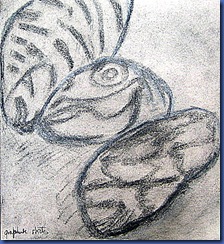 This is the second proper, albeit vestigial, drawing – some pebbles found by Mrs Cheddar, at Highcliffe last week – some beautiful markings which I haven’t quite managed to capture! 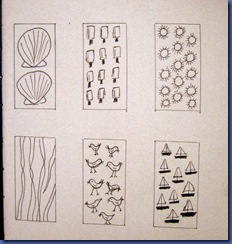 Then there was a semi-silly one. Also inspired by the seaside, although I'll forgive you if you don't quite recognise everything.

And finally – a completely silly one – which was the most fun and the most time-consuming. Doodles inspired by the background paper, Nicolette Anderson’s ‘Delightful Doodles’ on-line course, and those wonderful Eastern European embroideries which are smothered in stitched flowers.

I’m feeling a bit more confident about what a drawing is, by the way. In the middle of an insomniac night I Googled ‘What is drawing?’ and found this definition on this site:

‘…  drawing is seen to be any form of marking a surface with a view to creating a two-dimensional image.’ Which allows everything I’ve done so far!

if you're getting bored - how about getting out your soldering iron? I found some old samples whilst trying to tidy my studio and thought that some of them could be considered to be a drawing. http://kittystitch.blogspot.com/search/label/burning

Quite right! How nice to find somebody doing the same thing - we can keep an eye on each other! Don't get bored, keep going.