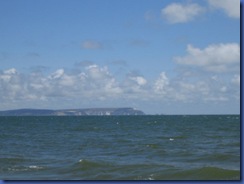 Yesterday we went to Highcliffe with Mr and Mrs Cheddar.

The sun shone, and the sea sparkled. 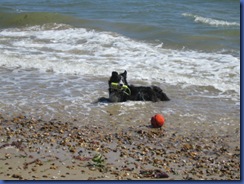 Ronaldog was in her element. 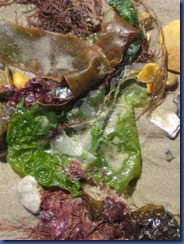 I had fun too. Shells, stones and seaweed. [I didn’t bring any seaweed home.]

But I did take my sunhat. 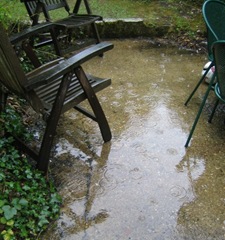 As a result, we had a thunderstorm overnight, and in the morning what we laughingly call the terrace looked like this.

And I didn’t even wear the hat – it was too windy! Perhaps I can solve the drought problem single handed – or single hatted.

Of course, it did rain on St Swithun’s Day – and it is the last day of term – and JP wants to do some sun printing - so we are probably due for more rain …

It did cheer up in the afternoon, but I used the weather as an excuse to stay in and potter with pictures [dither with drawings?]. [Wensleydale was up some scaffolding clearing the gutte 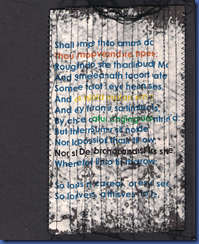 I revisited no. 30 – except it is number 34 now.  It is such a long time since I last used Inkaid that I had forgotten that it ends up white, not transparent [at least the matte white version does – I think there may be a clue in the name].

So this ended up rather whiter than I had intended – but I think it works. The paper was bondawebbed to black felt, and cut into strips which were overlapped and machined together. Then I machined the result into the book, which was probably the hardest part of the whole shebang. Definitely an improvement on the previous version – more character, and overlapping the felt makes it look more like the corrugated hoarding which inspired it. I feel happier about it too, as I have put more work into it – the previous version felt a bit lazy. I have this belief that you need to use at least three processes with a piece – like Inkaid, deconstruction and stitch.

I also revisited no.32. I'd read somewhere that if you cover an inkjet print with black Quink and then bleach it, the print will resist the bleach but the ink won’t. I thought it would make the image more oilslicky, so I gave it a try – but using a previous version first. 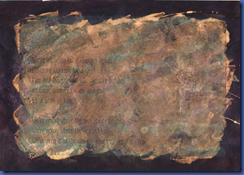 Guess what. Inkjet prints don’t resist bleach, any more than Quink does. It’s very atmospheric though. 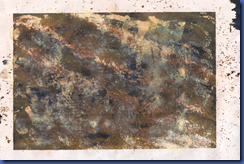 As is the back. 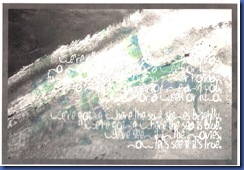 Just to confirm, I tried bleach on Mark 2, without Quink. I was a bit too enthusiastic with the bleach, but I like this version, too. So this is no. 35 - I seem to be working in a series. And it just manages to fulfil the three processes criterion, if you don’t count computer manipulation of the image and adding text as the same process. 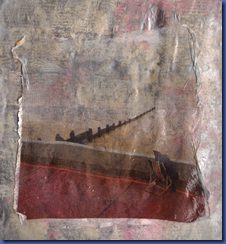 Number 36 is something I started a while ago, using a magazine image and Applicraft Transferglaze. [I have a feeling you can’t use this with inkjet images but of course I can’t find the instruction leaflet…]

Not too pleased with this one – I ended up with a stretchy, plasticky, sticky image, which I found difficult to stick down – although that might be because of the background I chose. I tried to add more colour with Graphitints but they didn't like the plastic, even on the back. And only two processes – unless you include the background.

And then I splashed white emulsion paint on a variety of papers which I may eventually get round to monoprinting on.

So, a good day overall, despite the weather!