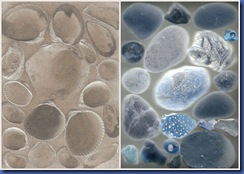 26 & 27 are these two -  the inverse scan which I’ve shown you before, and a scan of shells, which I played with in Picasa to make it look sandy. 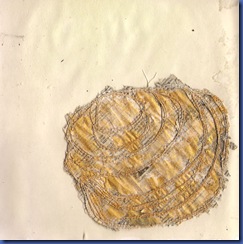 This rather odd effort is 28.It’s best described as reverse appliqué, embroidered from the back, using phone book pages – to which I added some gold paint because it looked a bit boring. If I try it again I will use some of the pages with more colour. I will also use some more robust paper as the base layer, as the phone book backing tor away when I didn’t want it to.

The workroom floor is now covered with bits of torn paper, though.

I’ve been a bit quiet, due to several outings, both the pleasant and less pleasant kind. The latter involved taking Quality Control to the vets, and then picking her up from the vets after a little dentistry for a loose tooth, some X-rays because she’s been limping, and a rather large bill. The limp is probably due to some ligament damage and not serious, unlike the damage to our bank account …

The pleasant outings were both arty – first to Winchester Cathedral to an exhibition by the Society of Portrait Sculptors, and then, with Mr and Mrs Cheddar, to Art in the Garden.

The former was, in my opinion, a curate’s egg. There were some excellent pieces, and some that did nothing for me at all. [Not saying which was which!] And of course they were all, in my eyes, in competition with ‘Sound II’ in the crypt, which takes a lot of beating – although with such dry weather it was not at it’s best.

[For those who don’t know the piece – the link shows water at the feet of the statue – in dry weather the water disappears and you don’t get the magical reflections.] 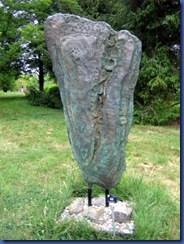 Art in the Garden was also variable – but there were some lovely pieces. We all liked this one by Eric Duggan – and Mrs C kindly identified the perfect spot for it in our garden. She didn’t offer to buy it for us, though… 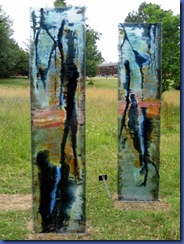 I also like this by Carole Waller – textiles, in case you hadn't realised. We saw some of her clothing at an exhibition in Woodstock a year or so ago so it was great to see some of her sculptural pieces.

how comes vet's bills are always so large AND they want you to go back a few days later just to check them over!!!!!!!!!