We’ve got all the time in the world [maybe] …

so how come we end up with all out appointments – optician, hairdresser, dentist – crammed into the same few days?

Sheer bad management, obviously. And of course the timing of each was inconvenient – not enough time to go home and come out again – although I hate doing that – but more time than we  needed to get from one to the other.

We did manage to fill one overlong gap with a slightly belated celebratory lunch for our 39th wedding anniversary. Nothing too ambitious, we’re saving that for next year. 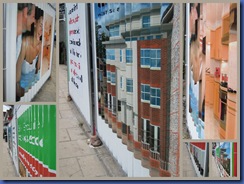 And I took more photos of the fencing across the road from the gym. I find the distortions formed by the corrugations quite fascinating. Wish I could find my ribbler…

We filled another gap by visiting the Wildlife Photographer of the Year exhibition at the Discovery Centre, although it’s not really our sort of thing. [Nothing against wildlife or photography, just not inclined to go and look at them. I like cake but I wouldn’t go to a cake decorating exhibition, either.]

But we enjoyed it nevertheless – some beautiful and thought-provoking images and a whiff of scandal - what more could you ask?

Yes – scandal – the winning image [top of this page] has been disqualified.

We still haven’t finished with appointments, as Wensleydale has an operation on Saturday, to repair the damage to his knee, as far as it can be repaired . We know it isn’t going to work wonders, but it may make his walking a bit easier. He also got his disabled parking badge today – despite having been lame for half a century he’s never applied for one. [Typical bloody-minded independent Yorkshireman.] After his injury last autumn and a lot of nagging encouragement from his family, he applied for a blue badge, and to his surprise, though no-one else’s, got one – which will widen our horizons a bit. If I can persuade him to actually use it.

With all our co 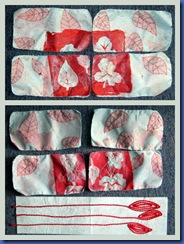 ming and going, not much in the way of drawing, bookmaking or needlework has been achieved, although I have finished these pages, and made a start on the cover.

I am very pleased with these, and have come to like the colours – although I don’t think I’d necessarily use them again! I’m going to count these as 4 drawings, so that's no's. 43–46. I'm almost half way to 100 and a month and a half to go. As you can see, the pages curl, which is a result of pulling the whipped edges too tight. Actually, i don’t dislike that – although I think I will experiment with the soldering iron for the next one.

I have also been thinking about the definition of drawing I found on this site:

‘…  drawing is seen to be any form of marking a surface with a view to creating a two-dimensional image.’

It’s that bit about ‘2 dimensional’ I’m pondering upon.

You may have come across Cheeming Boey’s drawings on disposable cups – 3D surface, but 2D drawings.

And I can see that ‘drawing’ 3D shapes with wire, say, is probably sculpture. 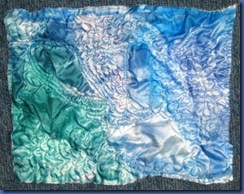 But what about this?  One of my pieces of sun printing, free machined to felt and then washed, so the unsewn areas of felt shrank and the fabric puffed up. Marks on the surface? Yes – but the image isn’t 2D. I think. Possibly 2.5D?

My original intention was to make this into a one sheet book with added hand embroidery – and I still might – but can I also count it as a drawing? Oh, decisions, decisions…

Still, we are intending to go for a long outing tomorrow, while we can, before W’s hospital appointment and recuperation, so I shall have to defer such decisions for a while.

glad you are having a good time - we have beat you by a year - it is our Ruby on the 8th - we are having a lunch here at home for 30 friends - keep your fingers crosed for the weather please!