Plan A for today …

was to do some monoprinting. But as it was hot and sunny I decided instead to make sunprints, using Karen Eckmeier’s technique from an old edition of Quilting Arts, with tissue paper as well as fabric paint. Only I wanted to try it on paper rather than fabric - and being me, it was a much more slap-happy approach than Eckmeier’s. 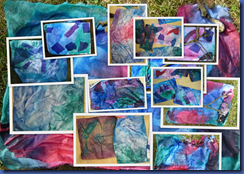 So a few hours later I have a pile of bits of paper [and fabric – I couldn’t resist].

Does the technique work? Yes. Does it work on paper? Yes.

I used brown paper and newspaper as well as drawing paper, and it worked well on all of them. The biggest problem was that the paper dried out very quickly so I had to keep spritzing it. There was less colour bleeding from the tissue paper on some very fine polyester fabrics I tried, but there was a ghost of the shape left, which is more subtle – well, as subtle as I ever get … 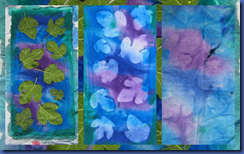 I did try some traditional sunprinting as well. On the left, fabric and fig leaves pinned down on my print board. The middle is the ‘official’ sun print – but I also got a ghost print [far right] on the calico I’d used as a temporary cover on the board. Two for the price of one! 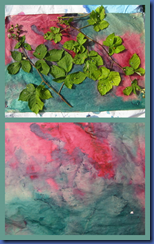 I also tried traditional  sunprinting on brown paper – with less success. You may just be able to see the ghost of a blackberry leaf in the bottom image. I think the paper just dried out too quickly for it to work.

My plan is to try inkjet printing on top of the sunprinted paper – when I can think what I want to print on it. 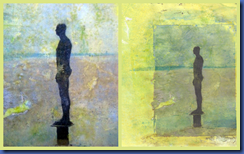 I did decide what to do with this gentleman. Original on the left, version with added Graphitint pencil on the right. One thing I learned from this process is that it is important to keep the transfer medium just to the portion of the page where you are going to put the transfer, as it leaves a plasticky coating on the paper – which the pencils struggled with a bit. But as a first attempt, I'm pleased with it. 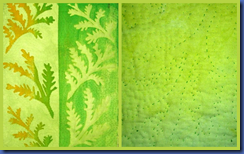 And finally – number 34.5. Maybe. If I decide it is a ‘drawing’. It is one of the screenprints, quilted. Oddly, I can accept that the back might be a drawing as it’s quite linear, but somehow the printed cupressus fronds make the front seem not to be one.

Let no-one accuse me of being logical…

So enjoying all the things you're sharing - a treat for the eyes!

forgotten about sun printing and now it is raining!!!!!!!!!!