Well, the seminar is over. Was all the agonising worthwhile? Yes and no. As I anticipated, I had problems with the technology. It started when I couldn't log into the University site on the desk top. I could on the iPad, but not the desk top. That meant that, as I don't have Word on the iPad, I couldn't upload stuff from home, but had to email it to myself and then save it when I got to uni...
Of course, once I'd calmed down a bit and consulted my friend Google, I worked out what the problem was. Not because Google provided the answer, but because it did confirm what I'd suspected - it was a Yosemite problem. Or rather a Yosemite-Chrome problem. When I switched to using Safari as my browser, suddenly I could log in.
Of course I didn't discover that until after the seminar...
The seminar itself was scary [only the second Powerpoint of my life] rigorous but helpful. It did reveal the major weakness in my “write the essay in order to plan the seminar” plan - if you get told to make major changes in your essay, a lot of what you've done is redundant. 😥
So, exhausted, I have put the essay on the back burner for the next week (“reading week”) and turned to other things 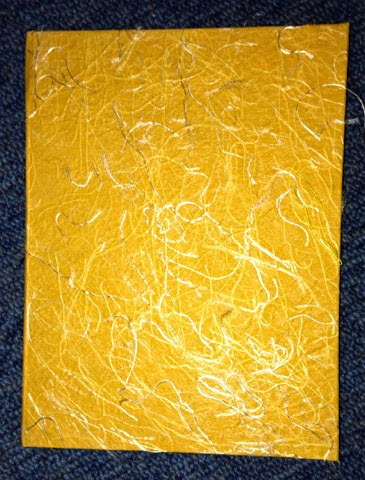 Like a book - my journal/diary sort of book is nearly full, so I've made another one. Its a simple case binding like all the others...
I have also finishing off stuff for the Visual Marks exhibition at Manor Farm - which starts on November 3rd. Be there or be square, as we used to say  in the - er - a few years ago. You don't have to pay the farm admission fee to get into the exhibition, although of course I strongly recommend going into the farm as well, especially if you nave small children to entertain.
I've all but finished the 3 panels for the exhibition - just hanging hardware to add. I am also making a few brooches, and have got to the stage of adding a backing - a layer of felt and a border of satin stitch.
The first one worked beautifully.
The second didn't quite work as well.
The third one is being a complete bugger. So much so that I am now sulking on the sofa with a cup of tea and an iPad.😣
Some time later.
Problem eventually solved, when I realised that, having used high tech technology to make a neat straight stitch circle round the edge of the brooch, I didn't need to use the same technology to go over the edge with satin stitch. It worked OK with the bigger brooches, but not the smaller ones. So I just did satin stitch round them without the aid of the technology - which was a drawing pin and a bit of masking tape to hold it to the bed of the machine. 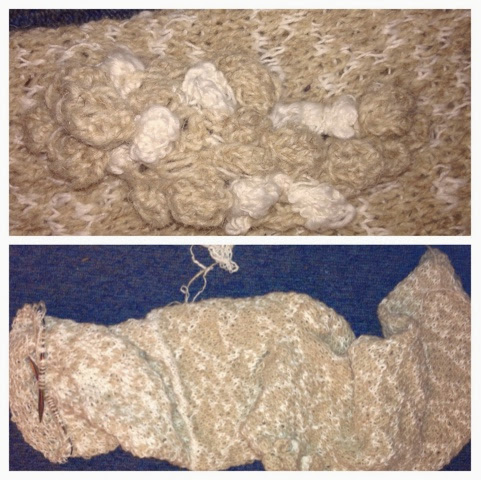 And there has been knitting. I suppose I will eventually get to the stage when I stop sampling and start knitting for real...
Next week is half term so it will be really peaceful 😏. We have already had our instructions for Monday: a creepy cruise is involved.   Little trains have been ordered for later in the week, but no mention has been made of Manor Farm😮!  I'll be surprised flabbergasted if we don't end up there.
Posted by Cda00uk at 18:30 No comments:

First, apologies if you tried to read the blog last week, and got spam - and thanks to Sandy for alerting me. I had to delete most of my widgets to get rid of it - hopefully it hasn't come back.

I am still plodding on with the seminar/essay preparation. The goalposts were moved on Wednesday - we now only have to provide a 300 word sample, and as I have already written more than that, that is the easy bit. What I am really stressing about is the PowerPoint. When I try to run the slide show on Big Mac, the program crashes. Every time. So I have no idea how it looks. And suddenly the contents of half the slides disappeared, for no apparent reason. I had already e-mailed a copy to myself and that seems to be OK, but I won't know until I get into Uni on Tuesday whether it will work or whether I will have to start all over again.

Add to that, since I downloaded Yosemite, Word for Mac makes spelling corrections in French. And I can't log on to the Uni website from Big Mac ( though I can from the hi-pad, go figure). You may guess that it hasn't been a very good week, technologically speaking. 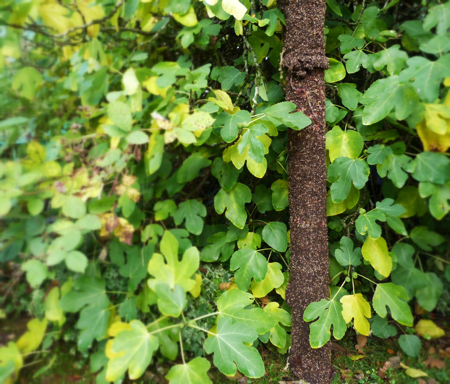 However, knititng is very therapeutic, and I have completed a demi-tree. Demi, because it is only about 5 feet long. I thought the yarn was wool, but when I washed it, it didn't shrink. However in its unshrunken state, it fitted over an old carpet tube we happened to have lying around, and it looks OK. Maybe this idea is going to work out after all!

Just think, by the time I write the next post, it will all be over.

I didn't mean to disappear...

I am beginning to realise that this course manages to combine being 'very flexi', as one member of staff said to me, with being very structured. This is not necessarily a bad thing, but it can be stressful! For example, this semester we have to write an essay - in my case on 'outsider art '. Essay writing , for me, is not usually a problem, but, as preparation for the essay, we have to contribute to a seminar. I can see all sorts of good academic and pragmatic reasons for this, but, although I can talk for Britain, it has become a problem.

Powerpoint of the essay plan? The plan is no problem, I've already making a mindmap, but I've only ever done one PowerPoint presentation, and that was years ago.

Hand in an estimate of the number of words in my introduction, conclusion, etc? Haven't a clue, until I've written the essay.

So that is what I'm doing. I'm writing the essay, in order to make a presentation, as preparation for writing the essay.  At least I'll get some feedback before I write the final draft! But - the essay is due at Christmas, the seminar at the end of the month. What seemed like a generous time allowance has become somewhat tight...

I did take a day off from essay writing, and went up to Compton Verney to see the Folk Art exhibition there. Great exhibition, great venue, just wish it was about an hour nearer... However it provided lots of useful information for the essay, which was my main reason for going. 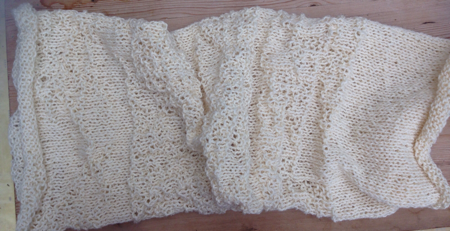 I have continued with my experimental knitting. This is a sample of 'cellular automaton' knitting, from Debbie New's book, and I think it has bark-like possibilities. It is due to meet the washing machine as soon as there is a suitable load to put it in with. 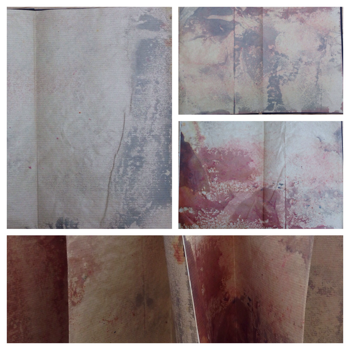 And this is the book of the fortnight. Another concertina book from painted brown paper which ended up vaguely tree-like. The cover is boring black, so I didn't show that.

I'm typing this using IOS8’s predictive typing, and trying to get used to it. It's a bit unnerving when it guesses what I want to say several times in a row - which it just did. Even more unnerving is that it seems to have learned my common typos too...