Weeks 15 and 15a
Sorry to go AWOL, I've been a bit busy.
To begin at the beginning. Week 15 turned out to be a bit of a damp squib. The lecture we were expecting was cancelled, but as the essay really was finished, printed, bound and ready to hand in, I couldn't take advantage of the extra time for last minute revisions. So I handed it in, both paper and electronic versions (that was the challenging bit), drank coffee, and grabbed a quick tutorial/feedback on the crits. I found it demoralising at the time, but when I'd calmed down a bit, got a good night's sleep, and reread the comments, they weren't too bad. I am less sure of what I'm doing than I was a month ago, but I think the staff would think that was a good thing...
By that time, however, we were bracing ourselves for The Visit. It was Mr & Mrs Cheese Minor's 10th wedding anniversary, and they celebrated with a couple of nights in Berlin. Which meant that the little guys celebrated by coming to stay with us.
I'd spotted that Winchester City Mill, which is one of the VHC's favourite places, was having a milling day, so we went to have a look. This might not have been a good idea on the Sunday before Christmas, but the local buses  were remarkably quiet, unlike the park and ride. We bought  flour at the mill, and made bread the next day, before heading to Mottisfont for their Nutcracker trail.
As we expected, the little guys loved the trail, especially the automata - and the ice cream (!) in the outdoor cafe. (Wensleydale and I opted for tea and cake.)
And on the third day, we headed for the Winchester Science Centre. Unfortunately their Christmas show in the Plantetarium had finished, but the little guys were quite happy with the usual one, plus plenty of time to explore the science exhibits. The cafe is good too - some of the best sandwiches I've had, and very generously filled.
You may be surprised to see no mention of Manor Farm in this itinerary. We had planned a visit, but Babybel didn't want to go!
After the little guys went home we needed time to recover, so we were glad to have no more social engagements till the 26th, when Babybel ran her first Boxing Day race with her mum and dad - 3 km in 20 minutes 'without stopping'! She wasn't first, but she wasn't last either, and she was so proud of herself! 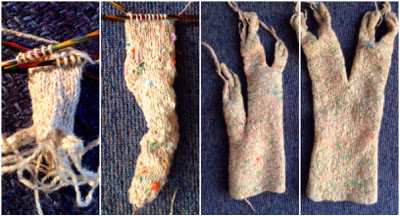 The quiet time allowed plenty of time for sampling trees/hands/branches. (Second left is the beginning of a branch, whatever you think it looks like!) I've also been researching some artists recommended by my tutor, who seems to have an encyclopaedic knowledge of contemporary art.
I also made some Christmas ornaments. I came across this lovely idea too late for this year, but I worked out if I started straight away and made two ornaments a month, we could have our own Advent Bough next year.  So next year the fortnightly ornament will replace the weekly book - I just hope it doesn't fizzle out like the books did. This is the last book, a variation on the palm leaf book I made earlier. 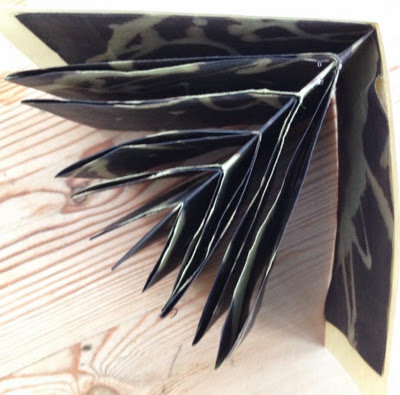 For the ornaments, I chose a colour scheme of red, rust, yellow, dark blue and cream - which is not a good idea when you want to make Christmas trees like this. As it turned out, I didn't have enough suitable green buttons, and barely enough cream ones, which is why my tree is an odd shape. I have a lot of buttons, but I was surprised how many of them were shank buttons, which wouldn't work.

I made a couple more ornaments, as you can see, from ideas here and here. My intention is that they will all be different, more or less.
We have a few more quiet days now until New Years Eve when the soon-to-be Spanish branch of the family ( that is, soon-to-be family, they are already Spanish...) are coming over for a few days. Then we hit the ground running again when term starts again. Must get more rest!
Posted by Cda00uk at 16:07 No comments:

Week 14 Running hard to stay in the same place.

My counting may have slipped a bit, but I know next week is week 15, so this must be the end of week 14. It is hard to believe that I've come to the end of the first quarter of the BA course. What have I got to show for it? A lot of knitting, a lot of notes, and the essay. All bound and ready to hand in. 😅
1. Some knitting. This is the mini sample. After felting, 50 stitches and 57 rows (it was meant to be 50 but I did too many and couldn't be bothered unpicking them) just fits a cylindrical wine box. I suppose I could use lots of cylindrical wine boxes to hold up the trees, but a) drinking all that wine wouldn't be a good idea, b) I haven't seen any more of the cylindrical ones, and c) the trees may become arms. Or maybe not. 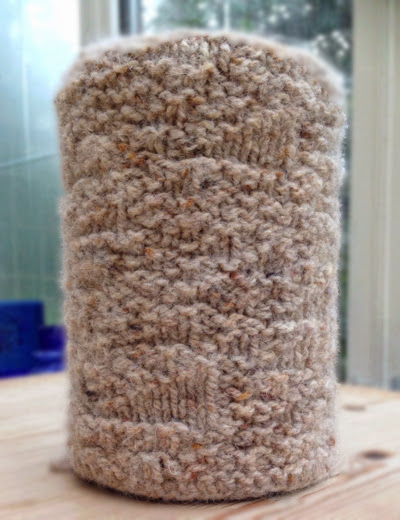 2. Some more knitting. These have nothing to do with uni work, I just love the way the wool/alpaca blend felts. I think I have enough left for a third one. There need to be three. 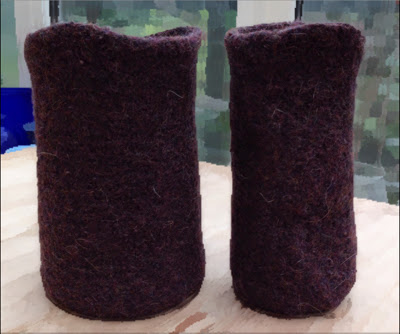 3. A book. All embroidered, folded up, and stuck together. It's odd, but I like it. 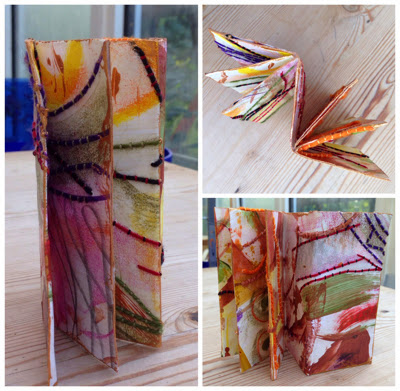 4. Some Al Wei Weis. We've been meaning to go to his exhibition at Blenheim since before it started, and we finally made it on Friday. It costs an arm and leg to go in but we can get free entry for a year, so if there is another exhibition in 2015, it will only have cost half an arm and a leg. (I wasn't so excited by Blenheim itself that I'd go again just for that.)

The exhibition was a bit of a 'Hunt the Wei Weis' as they were displayed in the house, unlabelled, and in some cases, hard to find. Some were pretty obvious - I'm sure the Spencer-Churchills don't usually cover their carpets with hundreds of porcelain crabs - but finding a specific porcelain plate in a room full of porcelain plates was quite difficult.  Especially when the order items were shown in in the guide wasn't the same as the order in which you go round the rooms. Especially  when the only clue was a postage stamp sized photo in a poor scan of the guide they've run out, produced on a printer with a dodgy colour cartridge. Especially when the illustration shows one plate and there turned out to be a dozen of them. (Assuming we found the right plates.) But it all added to the fun, and there were some stunning pieces - a chandelier in the hall, a carpet based on a rutted road, and the 31 lovely things above, which were in the gardens and therefore photographable. I think. Wensleydale was fascinated by the 40 famous finger photographs, and spent ages looking at them, trying to work out where they'd been taken. This was made a little more difficult because they'd been hung sideways on, so the finger was vertical. I assumed this was so they would fit in the spaces chosen for them, but maybe they are always hung that way?
Then we had tea and Christmas Cake in the nice, and not ridiculously expensive tea shop, and came home

The essay is all but finished - how many times have I said that? This time it's true. 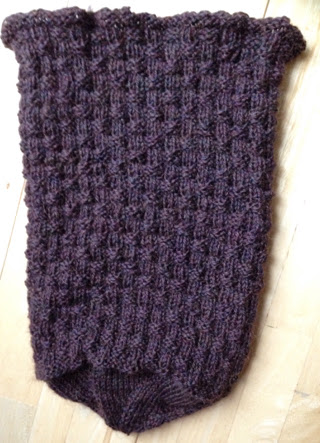 This is also finished, apart from a visit to the washing machine. I think I showed you its baby brother a while ago, but not after baby brother's second bath, when it shrank down to a really firm texture. But baby brother's gone to uni, so I can't show you what he looks like now. But because of his texture I made him a big brother, contrary to instructions. It's an alpaca wool leftover yarn, but I don't  think I'll be making alpaca trees, given the shrinkage and the price.

The big sample is finished and washed too, On the basis of this I think I need 50 stitches for a tree, so I'm making a 50 stitch sample just to check. 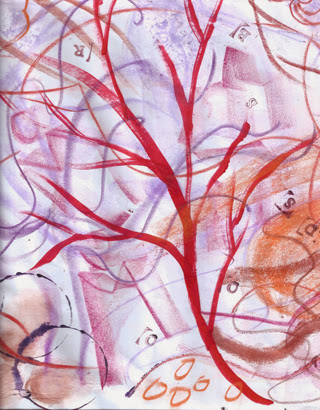 I have two books of the week in production. It was Visual Marks last week, and we did another communal mark making exercise. We each ended up with two samples. I like this tree - it was supposed to be roots but it's clearly a tree. But I was distinctly underwhelmed by my second piece, until I came across some instructions for a dos-a-dos book which I can't now find.

The  piece was a bit too long, (this is two scans joined together) so the end will become a simple pamphlet, with stitch as well. Our next exhibition in May is on the theme of connections, and I'm seeing all those interlocking lines as a network... 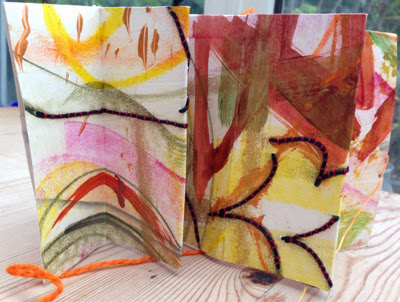 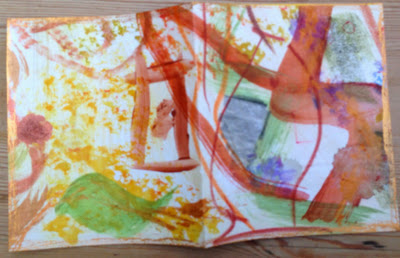 And my early Christmas present came today. Four days late, and having visited 6 different countries on the way, but it made it at last, so I've been playing rather than working today. 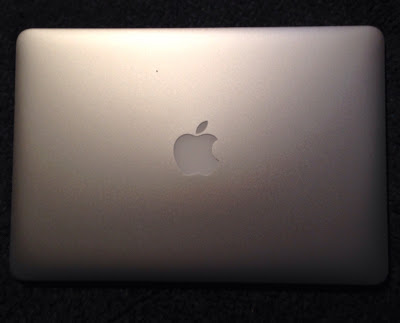 Crits (critiques) at uni tomorrow, which is a bit scary, especially when you have got very little to show except a few bits of knitting, but the feedback from those who have already gone through it is that it is OK... I may survive.
Posted by Cda00uk at 20:57 No comments: