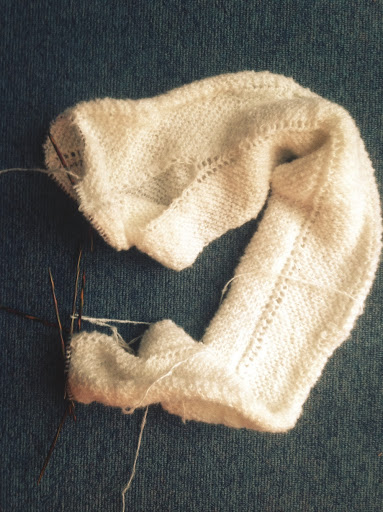 Yes, I am knitting both ends at once. It's a long story - and a long glove.
Not much else has been happening. I've  had a series of what Babybel calls 'wrong days' - nothing major going wrong, fortunately, but not much going right. For example, the curtains were finished and hung - and, true to form, I've managed not to get the linings in straight, so the centre of each lining is slightly longer than the curtain. Harrumph.
Fortunately the VHC is very happy with them, and I got a special 'thank you' from him at his birthday party, despite competition from (more) Brio type trains and (more) Lego. He didn't get many other presents apart from Brio and Lego but was not in the least disappointed: in fact he was so preoccupied with building a truly amazing train track that he didn't eat his birthday cake. This is unprecedented: he is rather fond of cake. 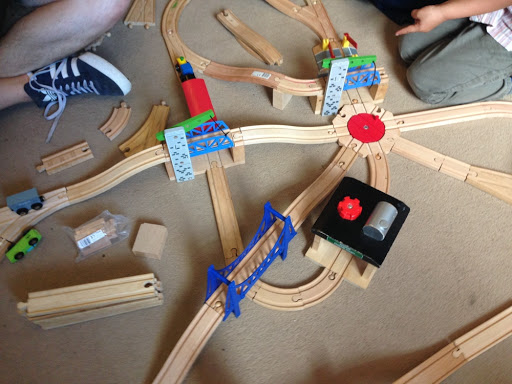 Those are the VHC and his daddy's knees. I'll let you work out which is which.
(I made the cake. I will spare you the saga of making the cake. Let's just say it was similar to the saga of making the curtains, only stickier...)
The highlight of the week was a trip down to Walford to the 'Abode' exhibition, which foolishly I had thought would be furniture, but turned out to be mostly textiles/mixed media. Some names I knew (Caren Garfon, Debbie Smyth, Caroline Parrott, Betty Pepper), some were new to me (Hannah Sawtell, Ruth Allen). All good, and a bit of a fifties vibe in some things which I really liked.
Despite the excellent work by these ladies, what both Wensleydale and I fell in love with was some plates. And bowls, jugs, cups etc. So much so that we came home and ordered some egg cups. We didn't need any egg cups, we were just in love. The range is called 'Eclectic Avenue' by a company called 'People Will Always Need Plates'.  Yes, They do. I really need plates like this. 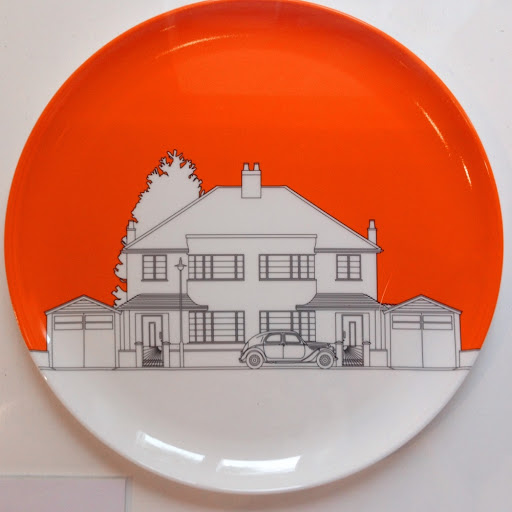 So wee are trying to justify buying some. Like a dinner service's worth. Unfortunately we have rather a lot of china already: my grandmother's tea service, my aunt's tea service, my mother-in-law's tea service, and two complete(ish) dinner services of our own, best and every day, of which we only ever use the latter. But if we give the dinner services to the sons, and sell the older stuff (which we'd been planning on doing anyway) - we'd need some replacements, wouldn't we? And we'd have some money to spend on it, with any luck. (The inherited stuff is not immensely valuable, but tracking similar stuff down on Google suggests we might get something for it.)
So, when we've got rid of the 20 something bags of books, which someone from a charity which I won't name was supposed to contact me about and hasn't, and accumulated enough boxes and newspapers to pack it all, and got my MIL's stuff down from the loft - I'll take a sample to the recommended sale room's valuation day and keep my fingers crossed!
Posted by Cda00uk at 18:35 1 comment:

I mentioned last time that my attempt to  shorten and line the VHC's curtains had been scuppered because of the need to wash off the sticky fixers which someone had applied to them. They had dried out by Monday but we had a very busy day so it was on a Tuesday morning that I sat down to tackle them. Pressed them, took off the old curtain tape, started to cut the lining to size - and realised that the fabric wasn't  wide enough. Entirely my own stupid fault, of course. I had measured them, but when I went to buy the lining and heading tape I couldn't find the piece of paper with the measurements on. So I bought what I though was the right width and brought it home. What I hadn't realised is that these are very w-i-d-e curtains. Thomas needs a lot of room, being an engine, albeit only a small one. So, a trip out to buy some more lining - extra-wide, so I don't need to seam it - and home in time for a drink before lunch. I cut the new lining to size (I shall probably do some creative knitting with the other stuff, so it's not wasted) and started to hem it. All went well until I jabbed my thumb with the point of the scissors. Blood on the lining! I know the best thing to clean blood off is your own spit, but there was rather more blood than spit, so I held the scarlet section under the nearest tap and fortunately it washed out. It is now draped over the radiator to dry. (Yes, it's August. Yes, the heating is on. It's cold!) Then I decided to put a plaster on the nick, although it's not very big, to prevent further staining. It took me about 5 minutes to get the #%*{€>* plaster out of the packaging, finally resorting to the scissors that caused the damage, and it was difficult even with those. I'm all for keeping plasters clean, but impenetrable? - not a good idea.  I had a much needed cup of tea,  ironed the damp section and resumed work.  I finished hemming the linings, pinned them to the curtains, sewed them in. Pressed the result, folded the top hem, pinned the curtain tape to the top and -  cut it off about 10cm too short. (The curtain was folded and I thought I'd reached the side - but I hadn't. Of course, what is left is amply long enough for one curtain, but not long enough for two. I really can't face another trip to the shop, so I will get some more tape tomorrow and try again. In the meantime I will head for my burrow and scream quietly. I knew there was a good reason to buy that bottle of Bombay Sapphire on special offer last week...
Posted by Cda00uk at 15:18 No comments:

When I got up this morning...

the plan for the day was to alter and line the VHC's curtains. I had foolishly volunteered todo this, because the window in his new bedroom is shorter and brighter than his old one. In my youth I made curtains from scratch, with proper linings - indeed, we still have the first set I ever made, 40+ years ago, and they are bearing up well. (Sanderson Morris fabric, worth every penny we paid.)   But I have never enjoyed making curtains, and gave it up long ago. I resisted altering these till I could resist no more. As the VHC and his family are on holiday this week, it seemed like a good time. I screwed my courage to the sticking place and sat down at the sewing machine. Only to discover that, for some reason, the curtains were encrusted with sticky fixers. (The reason is probably a mischievous nearly 4 year old, currently in Bruges...) I picked off what I could, and washed out the rest, but obviously I have had to postpone the task till they dry.   So instead, I replaced the pages in the remaining hand made books I found in my unplanned decluttering last week. 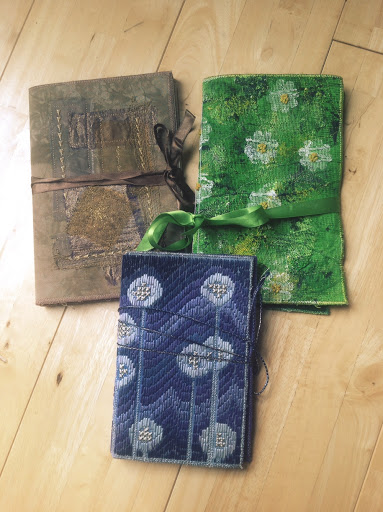 And covered a tatty A5 ring binder I found in the same decluttering. 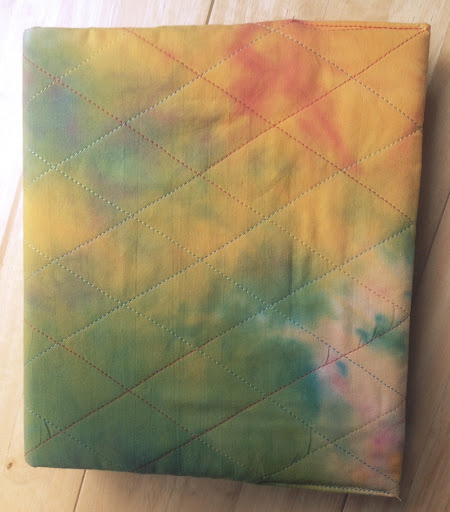 And reminded myself how to use the A3 printer, to print some patterns I'd made. Last week's 'Playing with Sketches' exercise was making a tileable pattern. And once I'd made it, I played with it in iColorama. I'd course. Today I decided to print off some of the results. After I'd remembered that the A3 printer chunters to itself, loudly and at length, before printing, all went well. Two of these are on painted paper, because I found it when I was looking for the plain A3. Two don't tile, but I like them. 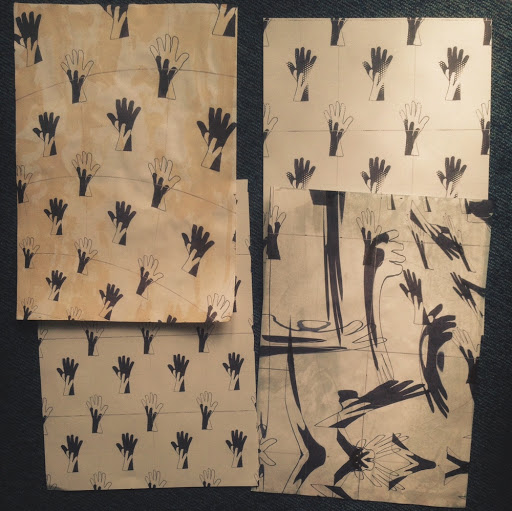 And I found and photographed my slipper socks. 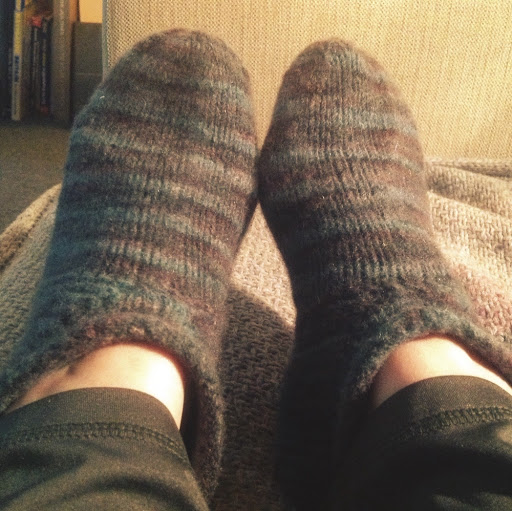 This was all much more fun than altering curtains...
Posted by Cda00uk at 18:58 No comments:

a. Some notebooks with painted pages, ready to doodle in; b. A few notebooks with contents I was still interested in, (in contrast to the large number I no longer had any interest in at all.) (I can hear someone saying 'You should have kept those!' No, I shouldn't, some of them have been up there, unlooked at, since before I started City & Guilds!); c. Six hand made books which need to have the pages replaced because I like the cover but I'm no longer interested in the contents; d. A box of blank notebooks; e. A box of sketchbooks with some pages left in them; f. Half a shelf of sketchbooks with no empty pages to speak of; g. Two boxes of hand made books too small or too interesting in structure to actually use; h. More space in my workroom; i. A bag of paper rubbish and a bag of non-recyclable rubbish; j. And a partridge in a pear tree. (Not really, though we often have a magpie in an apple tree.)   And I actually did some doodling!   Four things I haven't done this week.   Next week will be busy, as the little guys are doing a dance summer school and need ferrying about all week. However the week after that we have off, so although we did think about going away, it's ended up being filled with optician's appointments, hair appointments, car services and so on.      That's the trouble with being retired, there's no time!
Posted by Cda00uk at 19:15 No comments:

1. Assisted with the making of mosaics at the museum. Babybel designed her own. The VHC had a pattern for a bee, but he decided to make it 'multi-coloured' (his new favourite word) and then asked 'Where's the bee?' 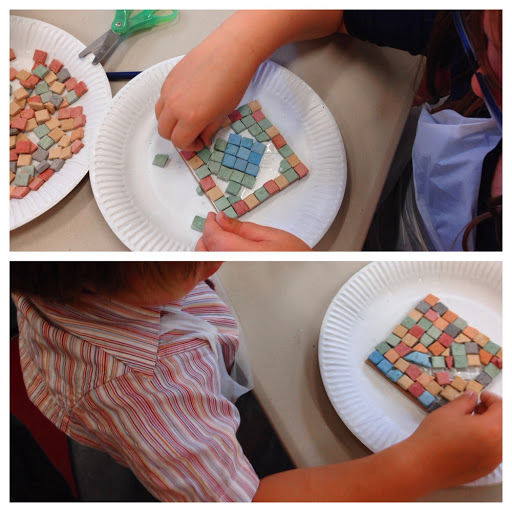 2.Worked my way through some exercises from this book. I’m up to exercise 6, although exercise 5, which is drawing with smoke, has been postponed for when I'm feeling strong. 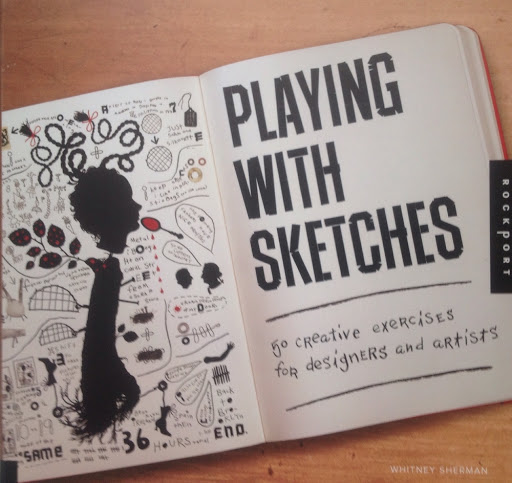 3. Finished July's Advent Bough decorations. And while I was at it, I cut out August's as well. Nothing beats being ahead of the game. 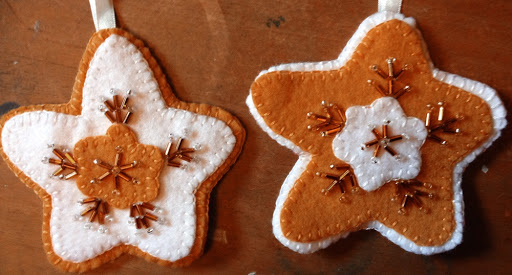 4. Given in to the little voice that kept telling me the other buttons  weren't big enough, and bought some bigger ones for the first long glove. (And picked them all up off the floor when the bag burst after I took that photo.) 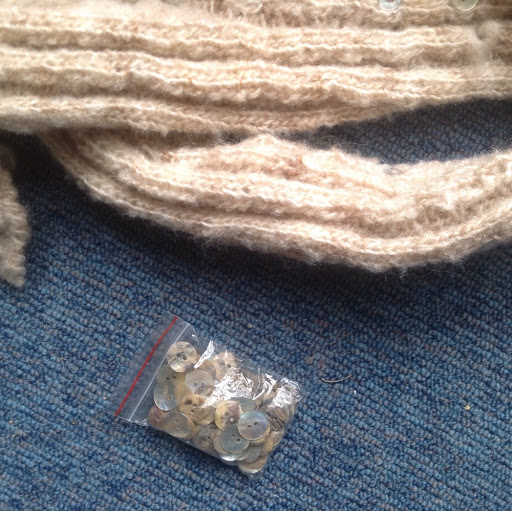 Four things I haven't done this week.
1. Taken off the too small buttons (predictive text suggested 'two'. I wish) and sewn on the new ones.
2. Finished this. But I will, I will, this week, barring disasters! 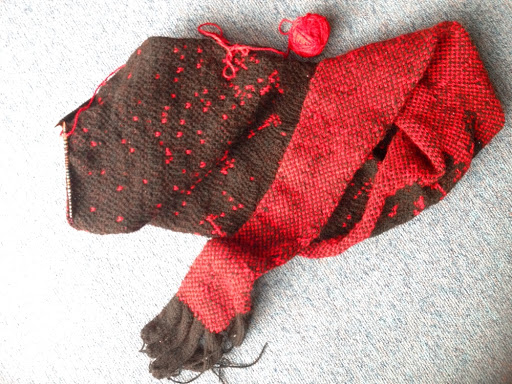 3. Done much decluttering. We tackled the landing book shelves (did I mention that?) and we now have 25 bags of books to get rid of. That's an awful lot of bags to take down to the book bank, and the local ones definitely don't have the capacity to take so many, so we have called a halt until we have cleared the backlog.
4. Watched any cycling. But I will be making up for that over the weekend!
Posted by Cda00uk at 18:07 No comments: