but only just. I think it's only flu but it has laid both of us low. We only managed  to watch a bit of the cycling world championships, that's how ill we've been.
Not much creative has been happening but I have finished this little sample, inspired by a 19th century cotton print. 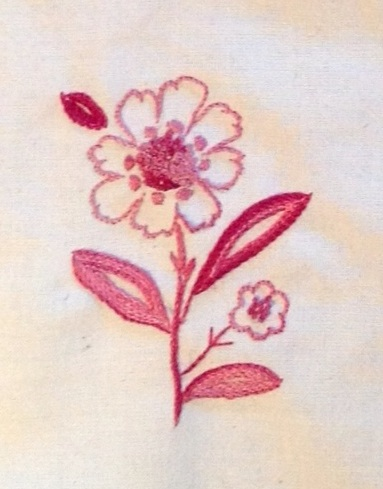 Sorry for the dodgy photo but I was too knackered to find the camera so took it with the iPad. Not a good idea really.
Before the lurgi struck I was hoping to spend the weekend assembling 'Moving On', but that hasn't happened, so there will be some frantic work next week.
Not a good week!
Posted by Cda00uk at 15:45 No comments:

I read about an exhibition at Portsmouth Museum called 'Make! Believe! Make!' (Someone even fonder of ! than me?) It included work by Alice Kettle, the idol of all Hampshire embroiderers, so I had to go.
I intended to get down to Pompey before Christmas, but it didn't happen, and when I realised the exhibition was due to finish before the end of the month, I decided I'd better get my skates on. So today, as the sun was shining and it was Sunday (we only go to Pompey on Sundays, due to traffic and parking), off we went.
There were, judging by the notes I made, 10 artists involved, showing work inspired by or related to objects from the Museum collections, alongside the sources of inspiration. And that was the fascinating bit - the inspiring objects were sometimes quite unexpected. For example, Ms Kettle had explored naval history, which isn't quite what I associate her with.
I haven't got the energy to write about all the exhibits I liked, and it would be much quicker to list the 1 person whose work I didn't like than the 9 I did, but it was an excellent exhibition. Apart from Ms Kettle, my favourites included:
Sue Paraskeva's ceramics, inspired, I kid you not, by a tray of broken eggs, also on show. You can see how this influenced her work here.
Melanie Tomlinson's exquisite and unusual metalwork, influenced by biscuit tins and butterfly collections
and Annette Bugansky's 'knitted' ceramics, influenced in part by a weaving by Anne Sutton, which we liked so much that we bought one. (The ceramics, not the weaving, although I would have liked that too.) I'm almost inspired to go back to the knitted vessels I played around with when we were doing 3D things for the degree. (Don't be stupid, Cheshire, you haven't got the time!)
Then coffee and cake in the Museum tea shop, and home. The only fly in the ointment was that the traffic was dreadful. All the world and her husband seemed to be driving from Gunwharf Quays to the seafront and back again. Wensleydale, who got so fed up sitting in traffic jams on his way in and out of Pompey that he sold the car and took to the train, said it was as bad as a weekday. And an accident on the M27 didn't help.
Despite all this gallivanting, I have managed to do a little on 'Moving On'. 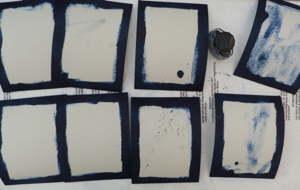 Potential backgrounds/page stiffeners using extra strength Vilene. Blue-black Quink is the perfect colour.
I hope they will flatten out when I add a backing - I shall be using the last of the curtains which featured so strongly in my first year degree work for that. 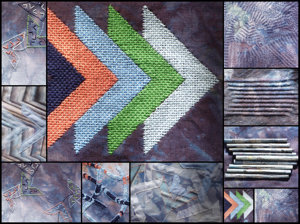 And I took advantage of the sunshine to get out the tripod and take some better photos of the completed pages.
Nex week is going to be busy as it's half term, and a small person will need to be entertained as well as her brother. I suspect a visit to Manor Farm may be called for....
Posted by Cda00uk at 18:43 1 comment:

The end of the beginning? 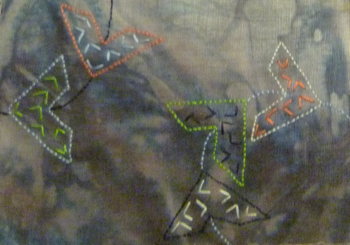 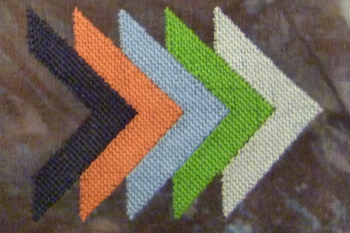 Two down, two more to go.

Or that may be three, depending on whether I decide (or have time) to redo page 4. Looking at it here, though, I think it serves to balance the light colours of page 3, so it may survive. Plus I need to get it all finished by the end of the month.
I've just started page 8 -  out of sequence, because how it looks when it's finished will influence how I do page 7, for which I have a design, but feel vague about the execution.
I had a dreadful dream last night in which neuf  (our post degree exhibiting group), were putting up an exhibition, and everyone had produced stunning new work, except me, who was stuck with my old stuff. I think this may be my subconscious putting the boot in.
Despite the ticking of the clock, I managed to get to three exhibitions this week, albeit one by accident, and one that had nothing to do with textiles.
As the library Discovery Centre was closed, I went into the theatre for my morning coffee, and caught the exhibition by Eve Dawson in the coffee bar. Lots of of small abstracts, in various media, which I found a bit overwhelming because there were so many of them. I would have found it easier to look at them properly if there had been fewer, bigger ones. However, they did trigger ideas for textiles, especially the wire ones.
In the afternoon, as the sun was shining and the exhibition was about to close, we headed to the Hillier Gardens for their display of snowdrops. There are, of course, snowdrops in the gardens, but they had collected lots of different varieties, plus some cyclamen, in an indoor exhibition. Very pretty, very suggestive of spring. We were given mirrors to look at the underside of the flowered, which highlighted some of the differences between the varieties, plus some of the self seeded variations they have in the gardens.
After our usual coffee and cake, we looked at the photography exhibition, which was also on at Hillier. Some very atmospheric images, which made me wish I'd got a bit more out of my photography class - although I suspect they all have much more complicated cameras than mine!
Finally to top off a good week, my washing machine has been repaired at last. Athough I've managed to keep on top of things because Babybel and the VHC's mum and dad kindly let us use theirs, it's great to have my own back in operation.
Posted by Cda00uk at 13:21 No comments:

Not much has been happening around here about from child minding, coughs and colds, and the police turning up at the Discovery Centre this morning. I was due to meet Wensleydale there, and thought they'd come to arrest him for being a Hell's Grandad, but no, he was being good, it was an event for people with learning difficulties.
So while he was still free, we took in the Michael Craig Martin exhibition upstairs in the Discovery Centre (good, lovely colours and shapes) and the Mayor's choice downstairs (less good, more interesting for the historic views of Winchester and environs than for the quality of the art). Interesting that the image they've chosen to use on that link is the picture I liked best of all in the exhibition, though judging by Wikipedia,  the artist, Fred Appleyard, didn't always confine himself to such unostentatious subjects.
Then we had a nice lunch at the usual place and came home.
Embroidery has been taking place, and I've almost finished page 5, while page 6 is waiting in the wings. Designs have been made for pages 7&8, though they need work. And I've had an idea about how to actually construct the book, using grosgrain ribbon hinges between the pages.
So perhaps something has been happening round here after all...
Posted by Cda00uk at 21:05 2 comments: