Not far, just over here. I have decided if Blogger insists on making it difficult for me to post to my blog, I'll go somewhere a bit more welcoming. If you want to follow me, my new Wordpress blog is still called 'Cheshire Cheese' - same name, same ramblings. You're welcome to join me at:

I shall leave the last nine years witterings up here, but I shan't be posting any more - it's too much like hard work!
Posted by Cda00uk at 00:19 1 comment:

Where do I go from here? 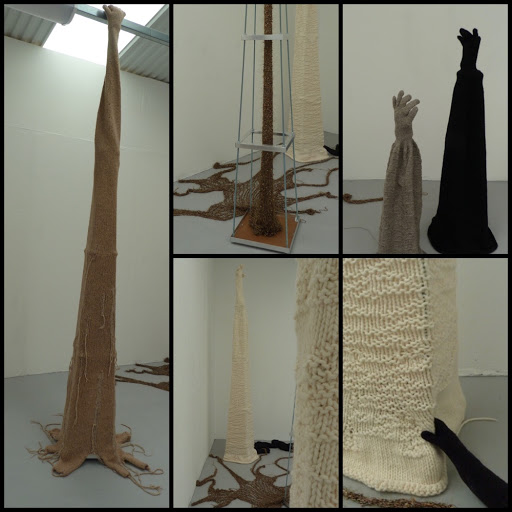 Well, it's all pretty much over. The walls and floor are painted, the gloves are erected and arranged, the 'background material' (sketchbooks etc.) is displayed, and Wensleydale and I are exhausted. It feels like it's finished, but I have to remind myself that there are several more visits to make: to pick up the background material before the exhibition opens , to steward, and then to dismantle it all and bring it home. (Assuming, of course, that no rich art collector has decided to buy it all.) (If you are a rich art collector, or just want to see more pictures, there's a video on the University of Chichester Fine Art Department Facebook page, which includes some more traditional art as well.)   So it isn't really all over, although I would like to think it is. But it is time to try to decide what I'm going to do with the rest of my life. I have promised W. that there will be no more degrees, but he keeps on saying 'if you do decide you want to do an M.A. ...) so I'm not sure he believes me. I had told myself that the knitting was over now, apart from socks (pair completed) or scarves (one started), but then when I was thinking what to do with the gloves (pull them back and use the wool for something else), I started thinking about knitting and felting containers. Which turned into thinking about knitting distorted containers, because I liked making the distorted gloves. Of course I haven't got the wool yet because it is still in glove form, but - assuming that no rich art collector has decided to buy them all - I will need to do something with them - so watch this space. Not sure what I'm going to do with the armatures though - anybody got any ideas what to do with umpteen metres of threaded rod and innumerable nuts? Better still, does anyone want umpteen metres of threaded rod and innumerable nuts? Lightly used, one lady owner from new.   In the meantime I'm doing some light pottering - trying to use up the non-knitting stash, albeit on a very small scale. Tiny weavings and embroideries, little books, small knitted samples. Whoops, how did they slip in? Because I found an excellent book called 'Pop Knitting' in a remaindered book shop in Romsey (the books were remaindered, not the shop) and in the middle of an insomniac night last night, decided to try some of the stitch patterns out. (You will not be surprised to hear that the wool in the gloves is not the only wool I own.) I'm using some hand dyed 4 ply which has been hanging around for years because, like a lot of my hand dying, the colours were not quite what I'd intended.  Nor do they go together, as you can see. ( Yes, it's garter stitch, but a version where you change colour on each row, by sliding the stitches back on a circular needle. This may develop into something, but in the meantime a bit of undemanding knitting with no pressure and no deadlines is just what I need. 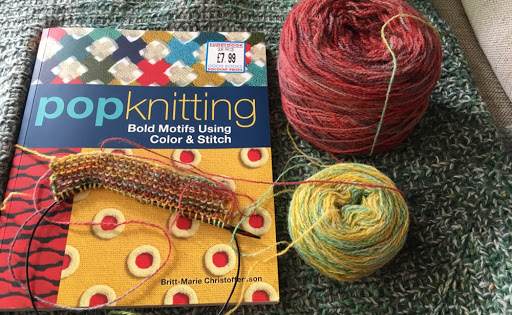 A change of direction? 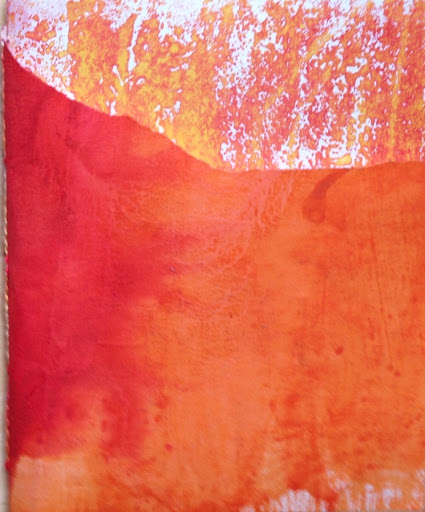 On her excellent blog, Alisa Golden suggests that if you are feeling uninspired, you grab a few sheets of coloured paper and make a book. While you are doing it, inspiration will, hopefully, strike. So I did. (It wasn't this book. It was a red one) and inspiration did strike - I decided to make a colour circle of books. Next up was orange. I immediately hit a problem. I had very little orange paper, and I was not in the mood to paint any. 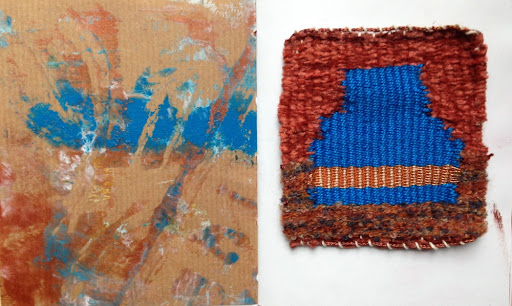 Which is how I ended up making an 'orange' book whose pages were mostly brown, copper and turquoise. Then inspiration struck again, and I decided to make some little textile pieces to go in the books. (Some quick little things, just what I need!) I started with the orange on as it's the smallest, due to the paper shortage. A little pin loom, just the right size, drew itself to my attention, so pin weaving it was. (The weaving, which is 8x9 cm, goes with the paper much better than it appears in this photo.) This is, of course, an experimental piece. In the next one, which I have already started, I have used a brown warp, and the one after that will probably be more abstract.   This does not mean that I have totally finished with the gloves. I shall be back at Uni on Tuesday and Wednesday, setting up the three remaining ones, and dropping off all my notebooks, sketchbooks etc. The it's a week to wait for marking to be done, the results, and the exhibition, before it is really all over. The two years have passed so quickly, and I have learned so much, but I shall be glad when it's finished.
Posted by Cda00uk at 18:30 No comments:

Setting up for the Degree Show 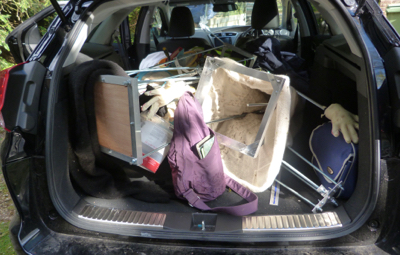 The first instalment of three: all we could safely get in the car. 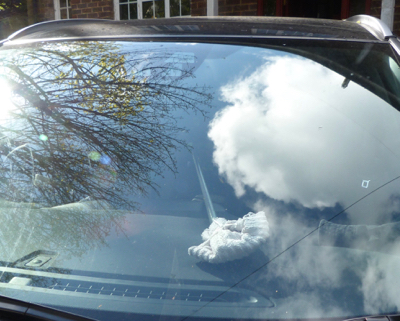 Even then, the rod for the biggest glove was snuggling up to the windscreen. 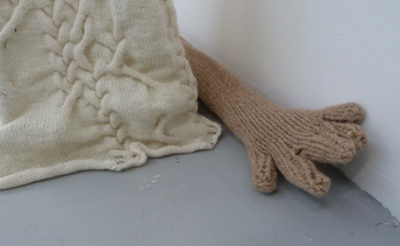 The big glove, and the one we call Matilda'.

One of the twins, and the small black one.
Six more to go, unless I don't show all of them.
Still trying to find a workable blog posting app to replace Bloggsy. Why does Blogger make it so hard to post on an iPad?

The last glove! Well, the last big glove, surprisingly the last months have not put me off glove knitting, but any future ones will be a little bit smaller, and come in pairs.

My fabricator is working on the 5th armature (of 7) and next weekend I shall tackle making foam filled hands for those without one. In the meantime, I'm trying to get on top of the paperwork, which is really, really really exciting (not).

By bad planning, I finished the glove in the middle of last night's episodes of the current not terribly brilliant Scandi drama, and of course I couldn't watch it without something to do with my hands. Embroidery was out, because I have to look at the subtitles, so I rushed upstairs and grabbed a tiny ball of luscious yarn to make one of these. This is how far I got. 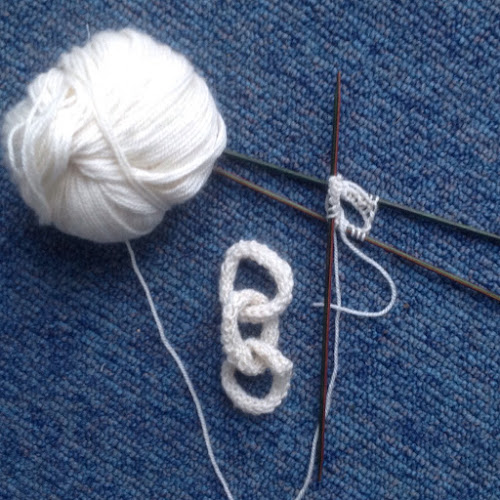 My yarn is lighter weight and I'm using smaller needles, so the links are coming out a lot smaller. And I have no idea how many links 25 gms of cashmere and silk will make, so I just have to hope it's enough.

Of course, it isn't perfect subtitle-reading knitting, because you spend more time casting on and off than you do knitting, but knitting one link through another is the kind of trick that amuses me. (I'm easily amused.) (I know I haven't attached the link that's on the needles, I shall do that when I add the next one.)

This afternoon, after some 'paperwork' that somehow ended up involving putting away the books I no longer needed for the degree, I plan on finishing off the much neglected hand embroidery of hands. I may not have had my fill of gloves, but I have definitely had my fill of hands. Not sure what will be next, but W. gave me a book about Georgio Morandi for my birthday, so I suspect there may be some vessels, involved, either 2D or 3D. I think Morandi is like Marmite, you either love him or hate him, but I'm firmly in the former camp. I like vessels anyway, and those chalky colours are so beautiful.

Not much junk this week... 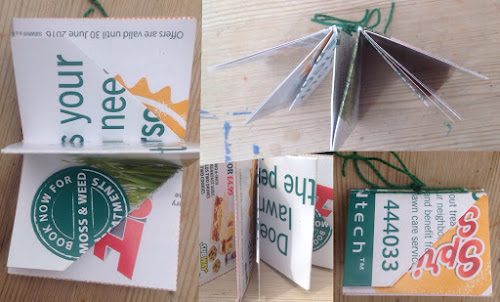 Only two items, but for once in compatible sizes - the junk food flier was three times the size of the lawn care card, which was very convenient.

This is a variation of Alisa Golden's 'house book', except that the way I made it, it's more like a chalet bungalow with dormer windows. 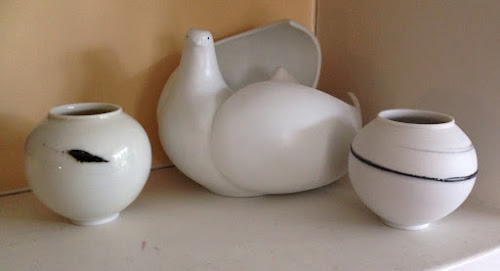 In other news, we went down to Walford Mill yesterday, for a nice lunch, to see the current exhibition, and to pick up the two Adam Buick moon jars we bought from the last show.

Here are our his and hers moon jags, with our paloma blanca, a lovely gift from Cheese Major's senora's parents. 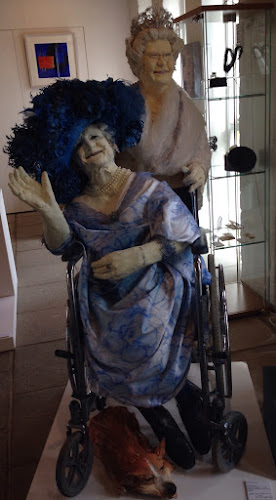 We got a right Royal welcome at Walford, as you can see. Paper sculpture by Peter Rush. 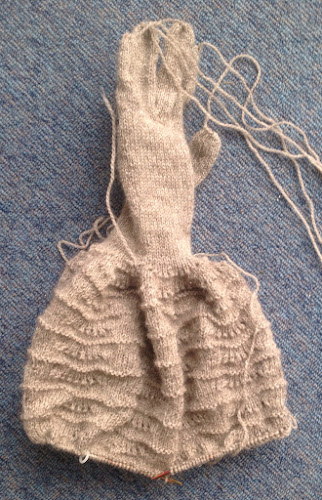 The Last Glove continues slowly. I have not had to unpick the last two pattern rounds, but only because I count stitches religiously for every increase and decrease section - and even it's not perfect.

I keep looking at it and thinking:

One out of three ain't bad!

It's been a funny Easter.

Good Friday disappeared, who knows where, although I do remember the sun was shining!

Yesterday Wensleydale was invited to help the VHC and his dad do some plumbing, while his mum, big sis and I had a good discussion over coffee and carrot cake. Although it wasn't very Easterish, it was very enjoyable, just to be able to get together and be sociable, especially as the weather wasn't very inviting. And a new tap was safely installed.

Today we woke up rather later than anticipated, due to a failure to recall that the clocks were going forward overnight. There was beautiful sunshine and a dead calm - which wasn't quite what was forecast. About an hour later, the rain and wind arrived. The sun did come back occasionally, but now the rain seems to have set in now, and the forecast is for 70 kph winds overnight.

So we have pottered around in the house, which is what we tend to do on public holidays, anyway. Living on the edge of popular routes to the south and west tends to discourage venturing out on the roads at such times, especially when you're retired.

W. has been working on armatures for my remaining gloves, and I have made a To Do list, which is a tad longer than my usual three item lists. It isn't very legible in the photo, but you may be able to read the words 'Degree Show'. In two months it will all be over, much to my relief.

But as we have quite a lot of time off in the next two weeks, both from Uni and grandparenting, I want to get on the top of the boring bits like making sure the paperwork is up to date.

I'm glad to say I've managed to check off two things today - the first item ('Make a list'), and one about going through the 3 million entries on the Notes app, for things that need to be added to the aforementioned paperwork. (I may exaggerate about the 3 million. Slightly.) 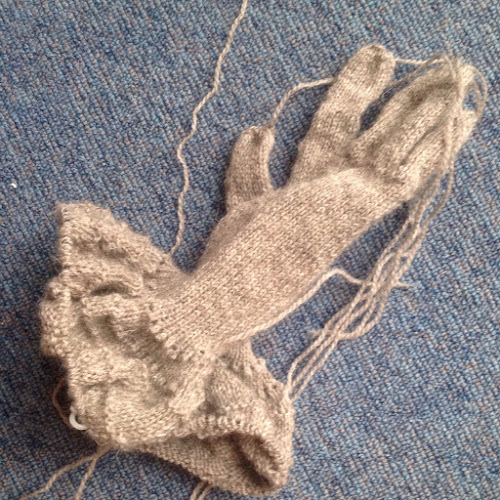 I have also done some knitting, on what is positively, definitely, absolutely the last glove. It has been started from scratch twice, undergone radical pulling back of multiple rows twice, and gets unpicked every pattern row, even though I deliberately picked an easy pattern (Old Shell/Shale). Of course, trying to work even a simple pattern row while reading a Danish TV series is asking for trouble.

Tomorrow it will be back to the list, probably following up some of the artists people have suggested I research and I haven't quite got round to yet...