Or maybe the panic was visible? We had a session on how to write an essay which combined stuff I used to teach students with 'what?' 'how?' 'when?' 'oh, hecky thump' - and finally 'help'!!!
Of course, when I came to look at draft 2 of the essay, it was closer to what we been told to do than I remembered. At least, I think it is - but I could well be wrong. I am now on draft 2a, which could be described as a skeleton with some meat on its bones but lacking in its final features - if you will forgive the rather macabre simile. Or is it a metaphor? I used to know this stuff!
On the more positive side, I have finished the sample I was told not to make.

For once, this stitch came straight from a pattern book, but I think it's quite barmy - er, barky, thank you, predictive typing... I found a tree which has similar bark but with red streaks between the flakes, so I am planning on adding some reddish stitch.
I have also started on the tree I was told to make, except that what I am making is a sample. More accurately it is a tension square, except it isn't square. After all, I need to know how big the thing is going to be when I've finished, and it would be too late if I only found out after I'd knitted and shrunk it.

This is not the same colour as the previous sample, despite appearances.
I did take a break from uni work to participate in Myfanwy's creative weekend, and good fun it was. It included making little books, so there is a book of the week for once, but my photo of that was even worse than the ones of the knitting, so you may get to see it next week.
When I"m finally shot of this essay I won't know what to do with myself,

Well, sort of.
The scarf for Babybel did get finished, and was delivered the day after her birthday. She was nicely greatful, and wore it for school. Unfortunately I forgot to take a photo.
This vessel/branch is finished, and blocking on the end of a carpet tube. Except that it didn't shrink as much as I'd hoped, so it will have to visit the washing machine again. I had intended that the ribs would twist round - but as you can see, they didn't. However,  I will not be knitting it again. 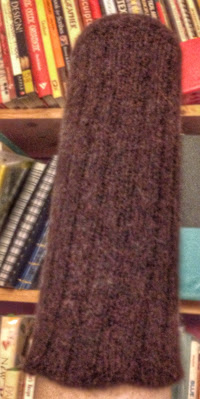 This bit of playing around finding  trees on a used colour catcher is finished. It was intended  to go in a sketchbook, but Wensleydale has decided it should be framed. So maybe that isn't finished either. 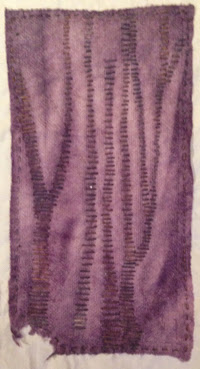 We had a tutorial on Wednesday and I was instructed to stop farting around with samples and start a trial tree. Well, not quite in those words, but that was the gist. I've done some research into how to hold it up - anyone know where I can buy that tubing they bury cables in? - and I would have started knitting after I'd finished the brown thing, honest, but I can't find the wool. I think it may be in the car, which is in the garage, but I'm too lazy to go and look. So I'm making a s****e, just as a stopgap.
The essay isn't finished either, but it is a lot closer to being finished than it was before the weekend - so close to completion that I am experiencing a great sense of relief. I have no idea if it is any good, but my ambition is restricted to getting it finished and handed in on time.
So, a better week than last week: let's hope the improvement continues.

But mostly not so good. In theory I had a hair appointment on Tuesday, but in between me learning that my hairdresser was off sick and the time of the rebooked appointment, his sick leave turned into garden leave. I knew he was moving on, but I only had the address of his new salon, no phone number, so that meant an unscheduled visit into town to book another appointment, but with someone else because he doesn't start there till next month.
I was not at my best for Uni on Wednesday, because I had had a couple of insomniac nights. It was a messy day, with some changes of schedule, of which I had only a vague grasp. I have realised that although the organisation is pretty good, there are lots of things that 3rd years are expected to know, because, after all, they've been around for two years already, haven't they? And if you haven't, finding the right person to ask can be a challenge... Plus the place runs on what Wensleydale, who has some experience of these things, calls 'art school time', which meant I drove home in the rush hour. 😬 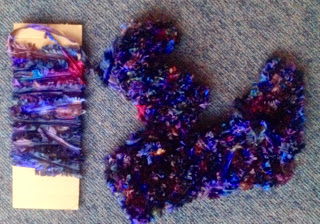 Friday was the day for sorting out hairdressers, but we made the most of it by having lunch out, so that was a good day. Until, at the end of it I realised that:
1. The scarf I am knitting for Babybel is going to be long enough ☺️ but
2. This meant that the big buttonhole I made in it is in the wrong place 😞 so
3. I would have to unpick it 😞 and so
4. It wouldn't be finished in time for...
Yesterday's Very Important Birthday Party.  I'm pleased to say that Babybel was pleased with her present - a chest protector - but then she did know what she was getting because it had to be fitted.   But, unfortunately,  Babybel's family are having a hard time at the moment and fate had decided yesterday was the day to throw yet another helping of s**t at them. Unpleasant rather than serious, so far, but they have had such a rotten time over the last couple of years, the last thing they need is more nasty stuff happening to them.
Today had been put aside for resuming essay writing. Perhaps because it's not been a good week, I wasn't really in the mood, so when Google decided not to find me many useful sources, Word decided to be uncooperative (no change there) and Big Mac decided to have a go-slow, I decided to make a book. 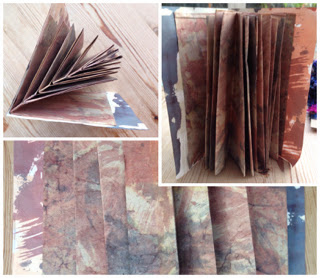 It is a fascinating structure, but it needs:
1. A large sheet of paper.
2. Careful measuring.
3. Careful cutting.
I managed one out of the three. I'll let you guess which one.
Here's hoping next week is better... I will resume the essay at Uni, where they have real books! 😊 and a computerised system for accessing journals which I have not yet plucked up courage to tackle. Wish me luck!
After my problems with Blogger last week, I am trying an app called BlogGo. Not very sophisticated, unless it has features I haven't found, but so far so good.
Posted by Cda00uk at 17:05 No comments:

Definitely NOT half term, prof says so.

Except that it was half term for the little guys, which is always busy, and exhausting. We went on a creepy cruise - not really very creepy,  and the VHC refused to dress up, but it was a lovely day and we enjoyed it. Later in the week the usual places were visited, and a good time was had by all. 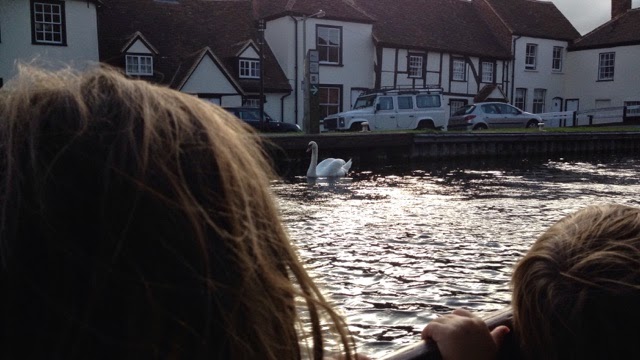 Granny and Grandad fitted in a visit of their own, but it was arty so allowable in not-half-term. We've been intending to go down to Salisbury to the sculpture show at Mompesson House since it started in the summer. It ends this week, so we decided we'd better get our skates on, and it was well worth while.  Some interesting stuff, including some inspirational knitting by Gary Hayton.

And the week ended with hanging the Visual Marks exhibition at Manor Farm. I had to leave before it was finished, but it was looking good when I left. A wide variety of approaches and styles, at prices to suit all pockets, including a few little stiocjing stuffers. How can you afford to miss it? 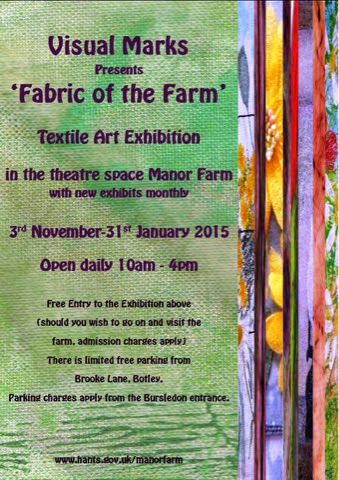 With all this rushing around, its been great to sit down and knit. The never-ending cellular automaton piece is ended and washed, as is the plain stocking stitch cylinder with strange accretions. Wensleydale took one look at the former and said 'silver birch' and he was right, so that's good.  He made no comment on the latter: I can't imagine why. 😏 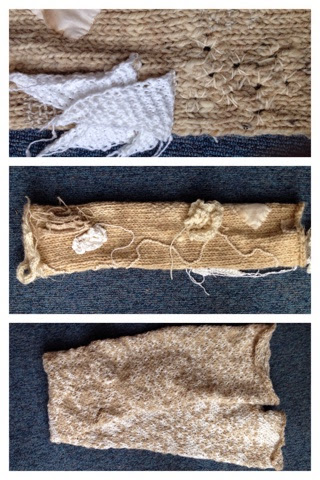 My replacement knitting is an attempt to mimic bark. I'm not sure what bark this is, but I'm sure the sample hasn't worked. 😒 However it has given me some ideas for the next one. 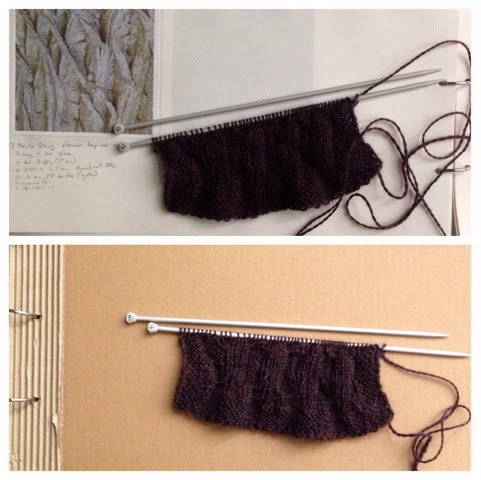 The book of the week is a cheat, I'm afraid. I made this cover years ago,  to present the supporting paperwork for a hanging I made in my first year of C&G. It was sea-themed, as you might have guessed. 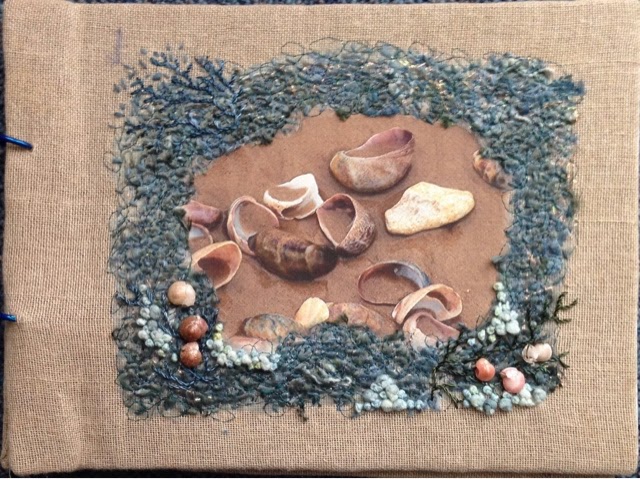 The contents - and the hanging - are long gone, but I liked the cover so I kept it. Originally it was stab bound but I found some binder rings (just a pity they are blue) and added some pages. I'm using it for the colour challenge Myfanwy has set Not enough time to do anything too demanding, but I made some colour studies and used the 'distort' filter in iColorama to come up with some decorative and embroiderable designs.

I'm using Blogger's own app to post now, as the app I used to use didn't play nicely - or at all - with IOS 8. However it definitely has its own opinions on where photos go, it has lost this post once so I have had to rewrite it, and I can't work out how to embed a hyperlink. If anyone knows a reliable blogging app for an iPad, which doesn't cost the earth, please let me know.

Back to Uni next week - I must get my head down for the essay. But until then I'll keep knitting!