We had a very helpful group critique in college on Wednesday, at which 'Earth to Earth' and 'Lost Words' went down well. Thinking about it afterwards, I came to the conclusion that there really isn't much point in making any more work at this stage - so I'm not going to. Probably.

If any of my fellow students are reading this, I hope you'll still speak to me - but one of the reasons was realising just how much big stuff we are producing between us - and most of it needing wall space. So realistically, however many individual pieces I make - there will only be room for one or two of them.  I'm unlikely to make anything mind-blowingly brilliant in the next few weeks - especially as we're away for some of them - so I'm quitting while I'm ahead. Lest this implies that I've finished, nothing could be further from the truth. I need to think about how to present the photographs of 'Earth to Earth' [our idea of mounting them on foam board was dismissed as 'too A-level'!] and find a better box for 'Lost Words'. Then there's the stalled business plan [it's so boring] and the non-existant contextualisation - and producing sketchbooks and notebooks that don't look like afterthoughts [even if they are].

But before I can face that I need a break, so  I have started some old fashioned hand embroidery, entirely unconnected with college. In my kitschier moments I have fancied making myself one of these, so  I dug out some linen I've had for about 40 years and got started. 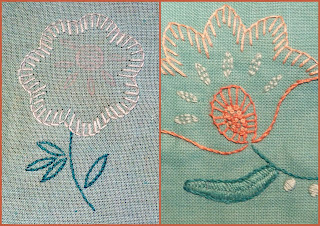 Contrary to appearances, these are both on the same fabric. It was going to be yellow linen, but despite looking in all the likely places and several unlikely ones, I couldn't find the yellow linen I was sure I had. I did throw out a bin full of stuff in the resultant temper tantrum, however, so it wasn't all a bad thing.

My eagle-eyed readers will have spotted that, lurking behind the half finished stitching on the left are some suspicious looking marks. Yes, it's a transfer. Undergraduate stitch student uses artificial aids and other people's designs shock! In the spirit of old-fashioned kitsch, I decided to use some of the transfers I inherited from mum - probably pre-war, and surprisingly effective still, unlike the crinoline lady. Yes, I confess, I would have used a crinoline lady if the transfer had worked...

Your eagle eyes will also have noticed that I'm rubbish at satin stitch. And that fly stitch is going to have to come out. But I am sooooo enjoying myself, and Wensleydale keeps saying how much he likes seeing me with some embroidery again.

All this self-indulgence will end at 9 p.m. tonight, though, when 'The Bridge' starts - our weekly wallow in Scandinavian drama needs to be seen to be fully appreciated - er - read. So it's simple knitting [or nail-gnawing] for a couple of hours.

just busy. We spent last weekend in Brighton, to see Babybel and VHC's mummy complete her first marathon, in the very creditable time of 3 hours 44 minutes. We also managed a visit to Brighton Museum, where we only had time to look at Julian Bell's work in what looked like a very good exhibition. [And the 20th century furniture as well - we always look at the furniture.] [And a cream tea.] Then on the way home on Monday we stopped for  lunch and a some highly contrasting art at Petworth.

Tuesday was busy too, catching up on what had been neglected over the weekend and a visit to the Watermill for 'A Winter's Tale'. I didn't enjoy this one as much as Henry V, although I did get propositioned by Autolycus [one of the penalties of sitting on the front row.] But it was still a good evening, and as ever the music was excellent.

Wednesday was back to college, and relatively peaceful. I had a helpful tutorial, with some good tips on how to present my work in the degree show. It was good to relax a bit before Thursday, which was a full day looking after Babybel and VHC - not that they are difficult children, but we're out of practice, especially with babies.

So this weekend has been rest and recovery time - a little bit of college work [mostly sorting out stuff for a critique session], a bit of non-college sewing, as I decided that our new yoga mats needed bags,  and a lot of sleeping.
Posted by Cda00uk at 18:24 No comments:

the rain comes down, and the productivity and enthusiasm comes down with it.

Partly because 'Saga' doesn't seem to be going anywhere. I think the more effort I put into it, the less I like it. After rolling the tubes, sanding them [should have stopped there], adding the crud, sanding off the crud, and colouring them with coffee, I started stringing them together. And decided that the result was b-o-r-i-n-g.

So I deconstructed what little I'd done and slept on it.

Today I sprinkled them with gold and black ink. 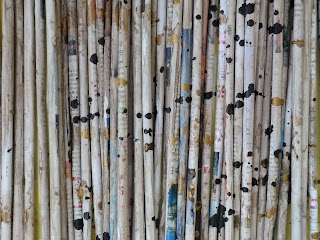 Mmm - maybe not. Back to the sand paper? Give up? Go for the Kaffe Fassett solution - if 20 colours aren't working, add another 20 - or in this case. another 2? 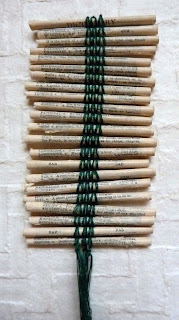 Although this ['Lost Words'] is sort-of-finished, I'm not sure where to go from here. It is quite tiny, and I think probably needs a frame - but what sort of frame?  And what size? And do I want to include something about the source? I'm tempted to get a bit kitsch and add lace and dried flowers - but I have a funny feeling that would not go down well in some quarters... 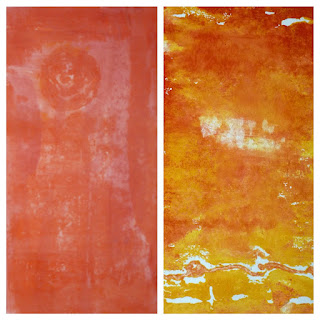 So I decided to tidy the workroom [I was that desperate] until I got distracted into trying out the collagraphs I made in college before Easter. 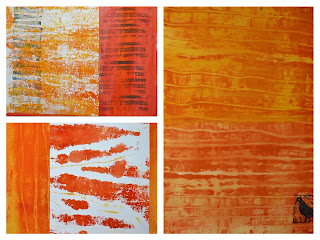 And that led into some stripy monoprints - which were better before I decided to add a watercolour wash to some of them.


But life is not all gloom - Wensleydale and I had a pleasant morning doing things like having blood pressure taken [him - he's 'normal'] and buying shoes [me] and finishing off with coffee and lovely fresh Danish pastries in the Cathedral restaurant.
Posted by Cda00uk at 19:23 No comments:

that my posts seem to be getting further and further apart. We have been fairly busy with outings - ['The Gruffalo' and 'Henry V' in one week - how's that for cultural diversity!] - and I have been tackling college work - but mostly it is down to fear of iPhoto. I tried copying all my photos from iP to Picasa - but, first, it didn't copy them all, and second it took all the names off the folders. Picasa is now being difficult about transferring the rest, so I think I will just have to learn how to use iP - or fire up Photoshop and use that. 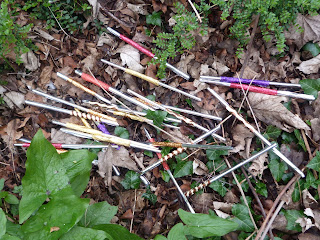 This is one new piece, 'Foil',  a work in progress. My first idea was to use recycled foil to make some more dipyramids, not for ritual sacrifice this time, but to hang from trees. However after I'd decided to use my collection of wine box linings for the tubes, I realised that unless I cut them very small, I only had enough to make about 3 dipyramids - not very impressive. And although Wensleydale is doing his best to empty another box for me, I would need three or six per dipyramid and couldn't expect him to sacrifice his liver to my art.

Plus I thought the dipyramids might look a bit too Christmassy.

Gluing foil is one of the stickiest experiences I have ever had. I used Pritt All Purpose glue. It works - but it's better at sticking you to the foil than the foil to itself - make 3 and go for a wash.

So, Plan B. One of the reasons for making foil pieces was because foil litter is so attention grabbing - so why not just chuck the tubes on the ground  like crisp packets? As I thought they needed to be even more eye-catching, I added some chocolate foil to the tubes - it seemed appropriate, the two most common types of litter being drink related and food/snack related. Lest you think I eat a lot of chocolate [I wish], these have been collected over several Christmasses.

I haven't left this outside, it is just too littery. 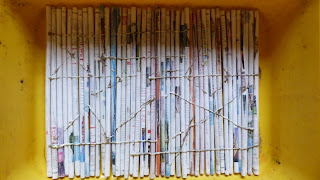 This is 'Saga' - pages from holiday brochures, rolled, glued and sanded. The dribbles in the photo are Puff paint and embossing powder in rune-like patterns. Unfortunately after I'd puffed it I decided I didn't like it, so they had to be sanded again. They are now soaking in coffee to make them look even cruddier.

And I've made a start on the business plan. If you know nothing about something - Google it - and then you will end up with far too much information. I mind mapped some of the information, making myself even more confused in the process - and ended up writing the thing mostly from a template on a UK government website for small businesses - and the BBC's site for GCSE Business Studies students.

The business plan still needs some work, but it was so boring I really can't face it again until after Easter - I hope I never have to do one for real!