Last week was reading week, or, as the little guys call it, half term. That meant that I didn't have to go into Uni, and because the little guys' mummy took the week off, there was no grandparenting either.
Despite it being reading week, the only thing I read was Hilary Mantel. But as the Uni knitting I'm doing at the moment is straightforward once I've finished the fingers, I can read and knit at the same time,  so I hope counts!
Instead of reading, I'd planned some art/knitting related visits. The flu still lingers - next week will be the 8th week! - but I made myself go out, and I'm glad I did. Well, apart from Friday.
On Monday we went down to Walford Mill to have lunch - er - to see Knit 1, Mend 1, Keep 1, Change 1 - a title I find it impossible to remember.  However the exhibition was very good and very inspirational, and I came away with lots of ideas.
Tuesday was spent reading and knitting, as previously described. Two prosthetic gloves have now been finished, and a third is on the needles. 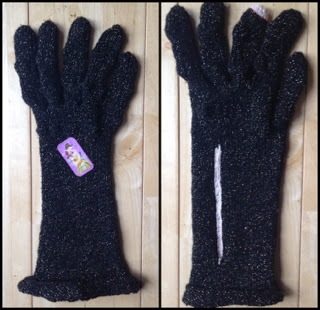 Yes, that is a plaster.
Wednesday was what was supposed to be the last meeting of 'neuf', the group made up of students from my year of the Foundation Degree. Since we finished, it's been increasingly difficult to find times to meet when we are all free, so six of us made it to the final meeting, for lunch and a gossip. Except that we enjoyed it so much, we will probably do it again in the summer!
On Thursday we went to Southampton Art Gallery, to see 'Artist Room: Louise Bourgeois' and Kurt Jackson's 'Place'. Both excellent exhibitions, interesting contrasts, and idea provoking in very different ways.
On Friday. Well, I would have done better to stay in bed. I wanted to go to Farnham Maltings to 'unravel': unfortunately a lot of other people had decided to go to Farnham too. After we had followed a lot of other people very slowly around completely full car parks, we gave up and came home.
After lunch I decided to make some bread.

This is what a breadmaker loaf looks like if you forget to put the yeast in, and the nut dispenser doesn't work.
Unfortunately I didn't realise that the nut dispenser hadn't worked until later, when it did work and filled the empty breadmaker with nuts, which  were very difficult to remove.
So the first part of the week was enjoyable and successful, and Friday wasn't. Not quite half the week, perhaps, but long enough.
We've spent a quiet weekend bracing ourselves for our return to the grindstone on Monday. And I even found the energy for some work in a sketchbook, thinking about  arrangements for gloves.
Posted by Cda00uk at 17:16 No comments:

I knew I hadn't posted for a while, but I didn't realise it was quite this long! My excuse is that what I was calling a chest infection turned out to be flu, because just like almost everyone else who had the jab, I still caught it. And I still have the cough, sniffles and occasional wheezing. And no energy.
I have been getting into Uni, where  we had a special visitor. 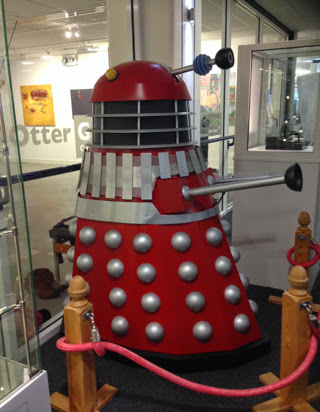 I managed to escape extermination, and after a couple of tutorials, the trees have been replaced with hands - or possibly gloves. The final deciding factor was these, which turned out much better than I expected, if a little small. I find those odd little fingers strangely expressive. They look even better pinned to a wall. 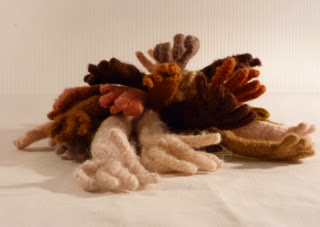 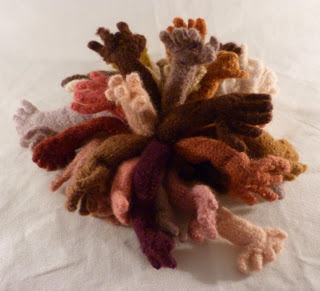 So now I am researching, collecting photos, drawing (!), knitting and modelling hands and gloves. 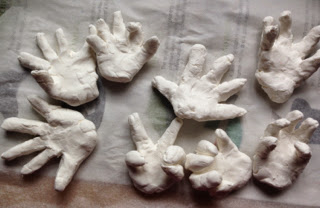 I"m exploring different sizes and styles, before deciding what I am actually going to do with them!
On an encouraging note, I got told off by a member of staff because I didn't put anything in for an exhibition which is coming up. I really didn't have anything suitable - they had to have D-rings attached, which is difficult with knitting - but in the depths of my flu induced misery, it was good to know someone thought my work was better than I did!