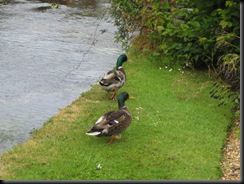 we went for out planned visit to Whitchurch Silk Mill this afternoon – and even got a walk round the grounds in between the showers. Of course these two didn’t mind the weather. 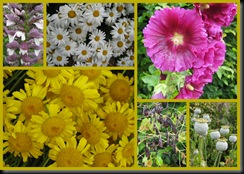 Last time we went the garden of dye plants was looking very sparse and dry – but it seems to have grown a bit. So much so that most of the labels were hidden in the undergrowth and I don’t know what some of these are. 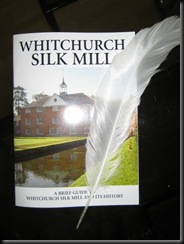 We came home with some goodies.

We paid for the guide book – the feather was a freebie plucked from the river, and probably donated by a swan.

Although the gardens are pleasant even in the rain and the mill is very interesting in its own right [technically minded husbands seem to enjoy it as well], we really went for this exhibition, curated by Lynn Szygenda, from the Embroiderers' Guild.

Like all exhibitions at Whitchurch it is small – two cases, one with smocks from the EG’s collection, and one with items by the Smocking Branch of the EG – or, as one notice has it, the Smoking Branch. Which conjures up an interesting mental image of women with smocking pleaters and other embroidery paraphernalia standing in doorways with cigarettes in their mouths. [Of course I just typed ‘smoking pleaters’ – criticising other people's typing is asking for trouble …]

I found the exhibition a real eye opener, especially the early 20th century pieces which were made for children or as demonstration pieces. I’ve seen pictures in books, of course, but books don’t do them justice –  the dense cream on cream stitching, both smocking and surface embroidery, is quite beautiful.

There is one smock which is believed to be a genuine 19th century work garment – and as you might expect, the embroidery is more utilitarian and the materials coarser.

There are also a few 1950’s girls dresses which may be familiar to those who, like me, were young then, and had mothers who embroidered. I particularly liked the red dress with matching knickers …

Worth a visit if you are in the area and want to see some interesting pieces. Last time we visited the mill we Gift Aided our entrance fee and were given free admission for a year – which is useful as there is an interesting looking exhibition of unusual knitting planned for the autumn …

Oh – and for those who coveted my little loom – they have some slightly different ones in the shop, which you can get to without having to pay to go into the mill. But don’t expect to pick up lengths of silk for a song. When you realise that just warping a loom can take three weeks, you understand why the stuff ain’t cheap. 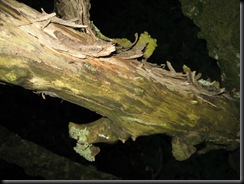 Today’s texture picture is – yet again – an apple tree. [We do have several but unfortunately they are mostly unproductive, being, we think, about 80 years old – and, let’s be honest, neglected.]

This isn’t an easy one to envisage in stitch -  possibly bits of silk paper layered and stitched? Anyone got any better ideas?