think ‘It’s a hot day with no wind so I'll take some paper out into the garden and spray it with old cold coffee?’

Wensleydale seems to think it is perfectly normal, but then he’s been married to me for 38 years this month, so his judgement may be unreliable.

The paper turned out very well. It is destined to become the pages of a book. Surprised?

In the afternoon we did something a bit more normal, judging by the number of people there. 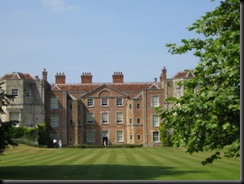 We went to Mottisfont Abbey.

We’ve been a couple of times before, but only to go round the house. It has a good collection of 20th century art and some trompe I'oeil  wall paintings by Rex Whistler. But we usually go just before Christmas when the house is specially decorated, so we have only seen a little bit of the gardens, like this Impressionist bridge. 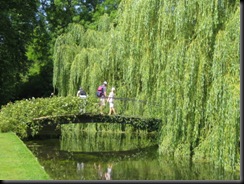 There are some enormous trout in the river, which respond well to bread – provided the ducks don’t get it first. 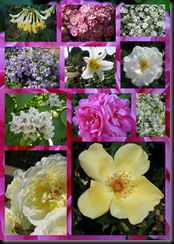 Today we didn’t go into the house [apart from the café] but concentrated on the gardens.

We were a little too late to see the old fashioned roses in their full glory but there were still plenty of flowers to look at, and smell. The sun really brought out the perfume. 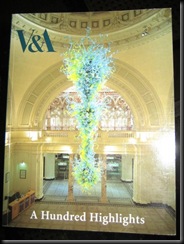 I love the shape of the honeysuckle [top left]. It reminds me of this – on a book which, coincidentally, I found in the second hand bookshop next to the cafe. [I forgot to mention the bookshop.] 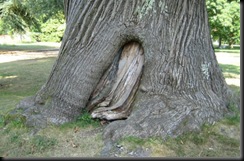 We also met an ent.  Here are his feet. 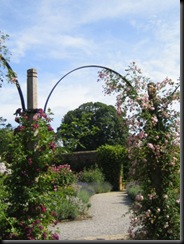 And here’s the rest of him, seen from the walled garden. 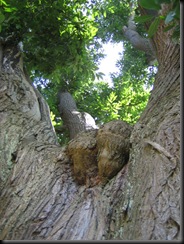 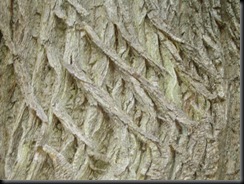 And here, for  today's’ texture photo, is his skin. He was a sweet chestnut ent. I am not familiar with ents – er – sweet chestnuts - so don’t know if this sort of bark is typical – but isn’t it great? Smocking, I think, or twisted cords.

Do normal people wander round trees taking close ups of bark and envisioning them as embroidery? I got some funny looks and they didn’t know what I was thinking …

Hello Celia, yes, I go around taking photos of bark and bricks and gravel paths, and often I'm asked "Why'd you take that?" - when I think it's a beautiful shot and quite obvious why I took it. BabyBel is growing up - we have two little girls now and another baby due in August - I had no idea what a joy they would be. It's great to be a grandmother.

All normal people talk to, photograph and commune with trees whilst figuring out how to 'stitch' them. It's only people who aren't 'normal' that don't... The smocking worn by the ent is wonderful.
Congratulations on the 38 years by the way. N.B. even Ronnie Biggs didn't get THAT long... (joke).

Yes, I visit an elderly sweet chesnut frequently. She lives by South Hill Lake here in Birch Hill, Bracknell, Berkshire. She has a lovely dancing skirt of moss at the bottom...and besides the wonderful crisscrosses, she is covered with boles which look like animal faces and homes.

Whenever I get round to doing them, I plan to do the crisscrosses with corded pleats that I have then gone along and stitched together at intervals. Almost like the pleating that you sew one way and then further along, sew the other way.