I promised you a book

but in an outburst of creativity 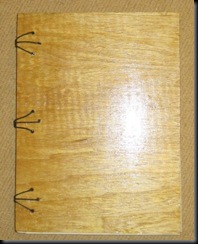 This is the Raven’s Foot binding from ‘Book Arts: Beautiful Bindings for Handmade Books’ by Mary Kaye Seckler. Sorry about the flash reflection – the photos with no flash were even worse.

It’s what I started yesterday but gave up when I got to the last signature and realised that I didn’t have enough thread left to tie it off.

Annoyingly, when I was deconstructing it today, I discovered that if I had spotted an undetected tangle in the second signature I would have had enough after all. However I think I did it better the second time, so it was probably a good thing really. [‘Always look on the bright side of life’ -fill in your own Eric Idle impersonation here.]

In case you are thinking ‘How could she run out of thread on those little ravens’ claws?’ – this is what ate the thread – the sewing and  wrapping which holds the signatures to the ravens’ ‘legs’. [I think one raven may have a badly mended break in his.] 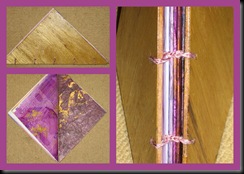 This is the second book. Like the first, the covers are made from offcuts of plywood which Wensleydale donated – skilfully cut and drilled by him, much less skilfully varnished by me.

As you can see I was feeling purple when I made this. It is yet another attempt at a Coptic binding – I’ve tried following several different sets of instruction 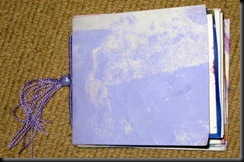 s but don’t really understand any of them!

Then I used the leftovers from the pages of the triangular book to make this one.

It uses the technique we were taught in Conte

mporary Textiles. I made four pamphlets and then held the four together by weaving in and out of the stitching on the spines. 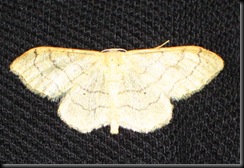 Today’s texture photo is another moth – unless you want to look at the texture of the laundry he’s resting on. It was difficult to get a good photo because he was quite small – about 3 cm from wingtip to wingtip. I think he looks like ruffled lace.