if I have given anyone the impression that this is an embroidery blog. Unfortunately my complete lack of inspiration continues. I even got out some of my old magazines and tried to find a project in there that grabbed my interest. Nothing. [So far anyway – I do have quite a lot of embroidery magazines yet to work through.]

However, books are a different matter.

Our homework, for the Contemporary Textiles Workshop, is to start a sketchbook on installation art, including studies of two artists. [Only two? I can think of at least 4 …]

The sketchbook can be bought or made. Now there's a challenge. Of course I have several bought sketchbooks but I’ve decided I prefer working with A4 size and the bought ones are too big or too small. In any case, where’s the fun in a bought sketchbook?

I was going to use the ravens’ claw one, but I realised that although it would be fine if I only sketched in my sketch books, but as soon as I started sticking things in [and I will] it would start to bulge. And as I am rather p 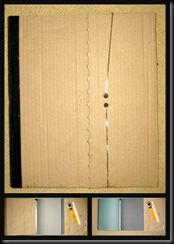 roud of how flat it ended up …

So yesterday I decided to make a book which would accommodate accretions. [Forgot to mention it in all the tree excitement.] 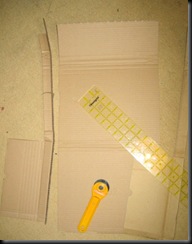 This is how it started – except that I forgot to photograph it before I cut the edges off.  Yes – it’s a thingy for packing books to post.

Embroidery books, as it happens.

I got the idea from here, but modified it a bit, by using the mailing thingy, turned inside out and lined with brown paper,  and by sewing in the signatures rather than tying them in. Hence the duck tape to strengthen the spine.

It was quick and simple to do and I'm tempted to make another one when I get another suitable cover. 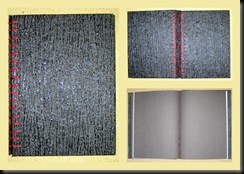 Well – one is never enough, is it?

This is a bit more elaborate.

It is a secret Belgian binding. I’m not sure if it’s called that because Belgian book binders tried to keep it a secret – or because you can’t quite see how the signatures are attached to the spine – but it’s a nice looking binding, and as the spine is wider than the fore edge there's lots of room for padding.

I covered the cover with some Indian paper bought at the Knitting and Stitching Show , with no real idea what I was going to do with it. It makes a good looking cover – pity I didn’t buy more of it …

There may be a few more books in the future because today the postie brought me this – book cover made from an old hot water bottle, anyone?

and this - which I thought was about scrap-booking until I saw some interior images on a website somewhere. A few projects but lots of inspirational ideas.   Including a different sort of wooden cover and as I just found another bit of scrap plywood …

Unfortunately neither of them came in a suitable bit of corrugated card. And I suppose I ought to start doing my homework. I always did leave it to the last minute …

And finally – another in

my occasional series of textural moths. [I have several photos of moths because they perch (do moths perch?) on the washing, hanging up to dry and stay there.] I think this would make a wonderful piece of canvaswork – either fairly realistic or Bargello—ish.