Babybel is one today!
Happy birthday to you!
Happy birthday to you!
Happy birthday dear Babybel!
Happy birthday to you!
Now I've sung that you can all take your fingers out of your ears. We are looking forward to seeing her on Saturday for her party.
While she was celebrating with her mum and dad, we had a Wednesday wander. A while ago I came across a mention of this on some booky website, so I persuaded Wensleydale to go into Portsmouth to see it. [He feels about Portsmouth like I feel about Southampton - been there, worked there, go back as little as possible.]
It was well worth the arm twisting. [Lots of pictures - not mine - here.]
Despite my love of making books I have not seen many real artist's books in the flesh - and here were dozens laid out for inspection. We were impressed by how imaginative and creative they were, and how beautifully made. I was particularly interested in those made from junk mail, envelopes etc. - and the altered books.
I have a very ambivalent attitude to altered books - I was brought up not to damage books so I find it difficult to alter them myself [although I write all over recipe books so I am not entirely consistent]. My other problem with them is that many of the altered books in magazines or on the web all look the same - and that look is not to my taste.
But the altered books in this exhibition weren't like that - [even I can accept an altered phone book!] and I found them quite inspirational. I even bought the [rather expensive] catalogue so I can browse and drool in comfort. 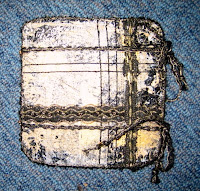 On a more mundane level - here is my own latest effort. I don't like it as much as the previous monoprint book but considering the cover was in the bin at one stage - it turned out better than expected. The colour is wrong because of the reflection of the flash.
There are some monoprints under all the crud. [I should perhaps point out that in the context of embroidery 'crud' to me is a positive concept - if the first layer doesn't work add at least three more].
I have come to the conclusion that producing monoprints I didn't like led to a lot more creativity. If I had liked them I would probably just have added some more or less sympathetic stitch and called it done.
The braids on the book are machine embroidery in metallic thread on felt which was then zapped with a heat gun so they ended up crumbly and lacy. The tapes/ties are machine cords.
[Technical discussion - ignore if you are not interested in making books!]
As promised, this book is sewn over tapes - I wanted to experiment 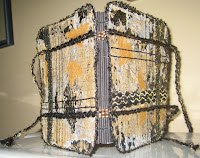 with using the tapes as ties and it sort of worked, although I think the spacing is wrong. It would be interesting to try sewing over a single wide tape - with kettle stitches top and bottom, as in this one, it should be reasonably stable and the tie might work better.
With this one I was concerned that the covers would not be firmly enough fixed to the spine by sewing alone - I didn't want to add endpapers as the cover is fabric and I wasn't sure it would work. It is fairly firm, but with a single tape undoubtedly wouldn't be. Perhaps another experiment is coming on?
Discussion over!

On a level that is so mundane it is positively earthy - on the instructions of Maggie Grey I have brought in my catalogues from the wilderness that is our front garden - and here they are. [I did remove the leaves, worms and woodlice.]
I am now spraying them with disinfectant as suggested and awaiting further instructions. The catalogues are - to put it bluntly - yucky - and I am not sure if they will ever dry out ...
I had hoped to show you the Maggie Grey towers book but it doesn't stand up correctly and has been disassembled for surgery. I hate redoing things - I'm too impatient - but this will have to be done.
Posted by Cda00uk at 16:58

Happy birthday to Babybel!
Your catalogue looks much "nicer" than mine.. Maybe I should put it back outside.

I enjoyed your post today (not that I don't usually). That exhibition looks really interesting. I wonder if it's going anywhere else in the UK?

I've brought my Maggie Grey sodden brochure in to dry out today. It feels decidedly slimy and is on the verge of disintegrating when I try and move it. Cooked, I believe!

Celia, I only came across the term Artists Books the other day when I happen to visit Cat Hill Campus of Middlesex University and there in the library was a wonderful but very small exhibition... just for me I thought. I made a book over the summer stitching over the braids on the spine and I have to admit I had to whip them out and use a narrower braid as I had pulled the stitchint too tight and squidge it. Loved your latest one. Lesley