It's not really finished.

This is just a

cleverly posed photograph, like those ones in dodgy travel brochures that don’t show you the bits of the hotel that aren’t built yet.

However the box has been approved -good job really as I definitely don’t have time to start again!

The teacher made one suggestion, the additio

n of a machine cord [like the stems of the leaf spray] round the base of the box. You can just about see it here.

I had been thinking that the sides looked a bit unfinished, and the cord solves that problem. It also hides the dodgy sewing joining the sides and the base. Even using a curved needle didn't help much.

It dawned on me part way round that if I had used the same thread I had used to wrap the machine cord to sew it on with – the join would have been invisible. [I had deliberately chosen a different thread, as I wanted it to show.]

The unfinished bit that you can’t see is the lining. I’ve started on it today, but got a bit frustrated because I cut the lining base card about 1/8th of an inch too small, thinking the felt padding would fill the gap. And it didn’t. So I shall have to take the lining fabric off and stretch it over a bigger piece of card.

[Apologies to at least one of my readers who doesn't do imperial measurements. that's about 0.5 cm - but I was using my imperial quilting rulers.]

The other irritating thing is that I made a second leaf spray to go inside the box, and I can’t find it. We even pulled out my desk from the wall to see if it had dropped down behind – something which should only be done with an archaeologist and a paramedic in attendance. But it wasn’t there. It has probably gone to join 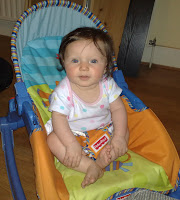 the bonding powder I lost part way through the metre piece.

Finally, for her fan club - a picture of Babybel demonstrating how to sit up and take notice, courtesy of her dad.
Posted by Cda00uk at 18:06

Isn't she lovely! (as the song goes!) And what a change from your early photos. They grow up too quickly don't they? Thank you for sharing.

Your box is beautiful!