I have been doing some real sewing -

making clothes. Not something I often do these days [and don’t ask me to sew on a button –unless it’s on an embroidery, of course.]

ded to use a piece of well aged fabric to make a caftan/gallabeyah - since we went to Egypt and I bought a couple of gallabeyahs I usually change into one in the evening:

My current ones are getting rather tatty so in the interests of economy and stash reduction I decided to make my own. I took the measurements from an old one and as it is essentially a rectangle of fabric with a hole in it – it is straightforward sewing. So straightforward I made two.

[I don't know where the padded hanger came from- not at all my usual style!] 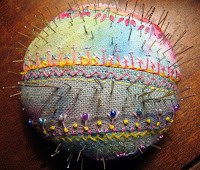 I have not, of course, abandoned embroidery. This is my second needlecushion – looking like a miniature Millennium dome. You may be asking – why two? This one is made of looser weave fabrics and is for tapestry needles, which won’t go into the closely woven silk of the boob-like one.

You may also be thinking that I have an excessive number of needles – and you may well be right. When I collected them from their assorted needlebooks I realised just how many I have. There are some others – the beading needles are with the beads, the curved needles are with my book making stuff – and I have some John James needles in their nice new packaging in my ‘box for going on courses, which has everything I need in it, including a pair of specs, so I don’t forget anything’.

Speaking of courses – I am going on this:

I have also be 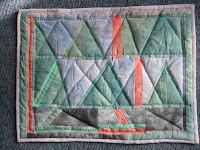 en doing some design work. You may have noticed the link to ‘Around the World in 20 Quilts’ in the side bar. [Thanks for having me ladies.] Every three months we are challenged to make a small quilt on a particular theme. Unfortunately I joined too late to participate in the first challenge, ‘Trees’ but given my liking for trees, I did already have a little quiltlet of trees. This is made from the leftovers of a larger quilt which is still unquilted.


This month’s challenge word is ‘stellar’. Not so immediately appealing as ‘trees’ but I Googled images and found, unsurprisingly, lots of images of space. There is also something called a stellar dendrite, which is a type of snowflake. That is quite an attractive idea – especially given my liking for kaleidoscopes – but so far I have only played around with the space theme. 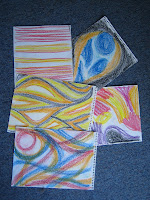 These are some sketches from the Google images, in soluble crayon, 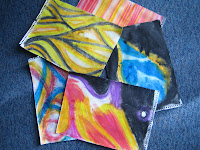 and after the application of water.


Of course, I did what I usually do, and scanned them. In colour, greyscale and black and white.

I use Picasa, and it is very slow to make multiple scans because you have to save them one at a time. I consulted Picasa ‘Help’ on the subject and it referred me, as it so often does, to the user group. One suggestion there was to use the scanning software of the printer rather than Picasa’s generic method – so I did.

Did it allow me to make multiple scans before saving? No. however I did discover that it will scan in inverted colours. So now I scan each image four times instead of three.

But you do get some interesting effects: 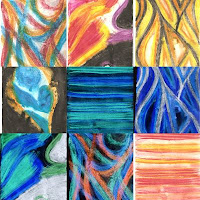 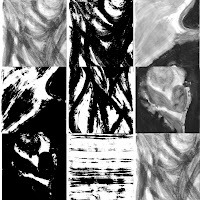 Grey scale and black and white.

I hope this group will provide the impetus to get back to ‘proper’ designing which I have lost since finishing C&G. The finished quilt has to be A4 size so I will not be wrestling a double bed sized quilt through the sewing machine, which is what puts me off making more big quilts.
And if anyone knows how to do multiple scans in Picasa - and how to reduce picture size to something reasonable for the web - and can explain it in one syllable words - I would be very grateful to know!

Wow! You've been busy.
Love you design work on the "stellar" theme.

Yes, I had noticed you had joined that group, congratulations! I will be watching avidly. I think it's a wonderful concept, different people around the world, connected by just one subject.

Still unquilted??? Shame on you Celia(vbg).