- just had a few days away. Last weekend we went to the Knitting and Stitching show in Birmingham – some excellent displays and retail opportunities. I thought the displays were an improvement on previous years: we particularly enjoined the Schiffli Project and Ruth Issett, and Beaney and Littlejohn’s exhibitions. And Raymond Honeyman. And the Art Bras – well, almost all of it really! 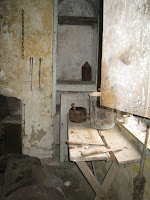 We had an afternoon off from Knitting and Stitching and went to Calke Abbey, which is a National Trust property. The Trust took it over in the 1980s in a fairly sorry state, and took the decision to repair it but do the minimum restoration. So the State rooms are imposing – and the private rooms are not. You can't take photos in the house but this corner of the stable yard gives you a flavour of the atmosphere.

The Harpur-Crewe family who owned the house for over 300 years were avid collectors - it’s not the place to go if you are phobic about stuffed birds - and never seemed to throw anything away. A prime example of the dictum that stash expands to fit the space available…

After Birmingham we went on the Welsh borders. Again. Although we spend most of our time in Wales we actually stay in Herefordshire, in one of our friends’ holiday lets 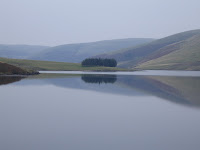 I don’t know if it was the weather, or the price of petrol, but everywhere seemed very quiet. We drove up the Elan Valley [we always drive up the Elan Valley] and for the first time in 30 years there was room to park so we could walk across the Craig Goch dam. The water was very still so the reflections were quite something. 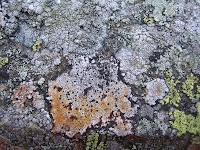 So was the lichen. [Does anyone except an embroiderer photograph lichen?] 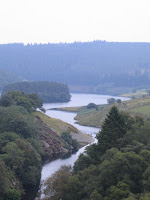 And you can see why Shelley loved the valley, although that was before the reservoirs.

The reservoirs provide water for Birmingham. Responsibility for servicing the computer systems which control the water lies in the hands of Cheese Major. Birmingham, you have been warned … 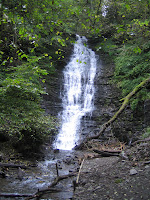 Another first was that after nearly 30 years of saying ‘We must go to Water-breaks-its-back’ – we did. You may have noticed this interesting name on the cover of my Welsh maps book. It is a waterfall – and given the sort of summer we have had, it seemed a good time to visit. Like everywhere else – it was deserted. And well worth going. Not the largest waterfall in the world, but very beautiful and very atmospheric, although the atmosphere was somewhat spoiled by a low level fly past by the RAF. 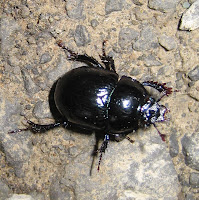 We met this gentleman - or lady, entomology isn't my strong point - on the path

We also went to Hay-on-Wye. [We always go to Hay-on-Wye.] If you don’t know Hay – it is home to dozens of second-hand book shops. Cheese heaven. I managed to get a copy of Constance Howard’s ‘Inspiration for Embroidery’, which I have been looking for for some time. I love old needlework books and have quite a collection now, ranging from the 1890s to the 1980s. Very useful when I was writing the magnum opus - probably one reason it was far too long...

While we were away I broke my specs - or rather I took them out of the case and the arm fell off. fortunately I had a spare pair with me. This morning I took them into Boots prepared to do battle, since I have only had then since June. They agreed to replace them without a quibble - turns out that this particular design has been withdrawn because of a design fault. The arms fall off.
Posted by Cda00uk at 18:16

Holidays in Wales..aaahhh! I have fond memories. I'm quite envious of you 'always visiting ' the same places.

Hi Celia,
Sounds like you had a fab holiday in Wales!

Hope you are also having fun with our cheeky little girl and equally cheeky dog this week. Please give them big kisses from me, I miss them muchly.

I totally share your frustrations with specs breaking. My pair (also from Boots) lasted four months before the arm snapped in half at the point where the two materials meet.

I took them back, got accused of breaking them but finally got the manager to give me a replacement pair. A week later the replacement pair had broken in exactly the same way!

The manager then agreed to give me a totally different design although he did try to suggest that it was how I handled my glasses that must cause them to keep breaking...

I'm glad they've recognised it was a design fault straight away in your case, I'm pretty sure it is with mine too as it happens when I first take them out of the case.

I think Boots need to rethink their manufacturing and design!